Bill is wrong or mislead when ordering

Bill is wrong or mislead when ordering

I re-contracted in February which was supposed to be £23.50 for the fastest fibre option (Up to 80Mb) however my bill is £26.00. Apparently this is due to speed boost from my previous contract being there. The email below shows that I would get 72.7 Mb to 73.6 Mb for £23.50 so shouldn't need the speedboost. Spoken to an online adviser who didn't seem willing to help. Just kept repeating system says £26.00. I know I can see the bill but the order implies this is wrong. I left confused and frustrated by this. 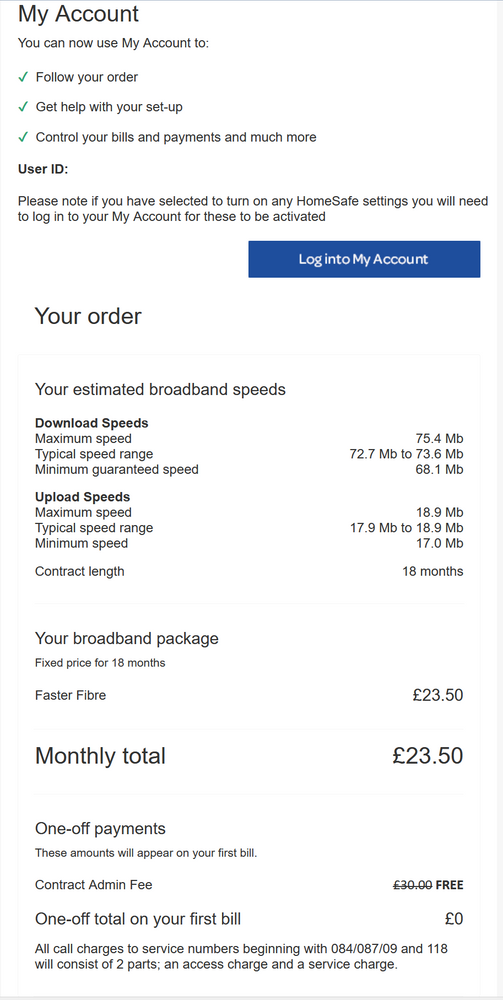 Re: Bill is wrong or mislead when ordering

The idea is that when people do their renewal or upgrade, existing boosts carry on.

These are designed to carry over, so, for example, you wouldn't lose your Anytime Calls Boost at exactly the same time as a renewal.

When someone on the phone / Chat sets it up for you, adjustments and checks can be made regarding boosts at the time and confirmed.

The spanner in the works is that if you renew through an email  link / My Account, the software doesn't know that you don't want your previous boosts continued. It is designed to carry on, regardless of whether this creates duplication of an inclusive boost in the new deal. Therefore it only knows to stop the old boost if you remove it yourself.

An OCE will sort this muddle out for you.....I hope that explanation makes sense!

Re: Bill is wrong or mislead when ordering

I can fix this , Ive sent you a PM on the community with some questions.

Once you reply I will sort this out.