A technical error page on my online  Account pages suggested an alternative way to make a payment was by using above number. I did, with my Talk Talk mobile phone, as it was the  Mobile bill section of my account I was trying to make payment to, and today I have discovered that for my current Mobile billing period, I am now being charged £0.55 for using this 0870 087 8749 number - should I have been?

I was being prevented from making the Mobile Bill payment online by a technical error, yet am being charged for then phoning the number provided by Talk Talk to call.

- followed online instructions to make a one off Mobile bill payment.

- could not proceed further, so unable to finalise payment. It told me to try again later or to phone the number given.

- tried again later via online account and over next few days and same error page message.

-then phoned the number yesterday, but discovered it was an automated payment line and wanted my Home phone number, so I assumed it thought I wanted to make a Broadband/Home Phone payment (I didn't as those are paid monthly via bank) rather than mobile one and hung up (just as well, perhaps, or it would be an even higher amount than £0.55).

I haven't received any updates sorry.

Was there an outcome to the investigation?

Its been reported and is being investigated.

You are welcome. Unlike me going away from Talk Talk mobile, though, the problem of the Mobile Bill payment section of My Account hasn't gone away and is still an issue for other Mobile customers....it really does still need fixed.

Thanks for the update.

The option to pay Mobile Phone bills online via My Account remains broken and at final stage still gives out the message to phone the 'rogue' 0870 087 8749 number to pay instead. Despite having reported the issue via phone, online chat and this forum, it would seem that the department responsible for fixing it either don't want to , don't know how to, or haven't got around to doing it yet, even though it has been a while.

I can advise that I have now, however, after almost 50 minutes on chat last Friday, and having been passed between a number of agents, secured refund of the £0.55 charge. Certainly not worth the time spent on it, but good to have satisfaction on point of principle. I have also, albeit with usual difficulty due to hearing, yet again paid my latest bill by telephone (whereupon the agent there, too, promised to escalate the ongoing issue with the online payment option - I still doubt it will be resolved).

Finally, and perhaps best of all, certainly as far as giving me less Mobile Bill hassle going forwards, I ordered a new Sim card from another provider on Friday, received it yesterday, got my PAC code from Talk Talk  yesterday and my number was transferred to the new provider today. Only the current period bill to receive and pay from Talk Talk, which no doubt I will have to do by phone, then that's it.

It shouldn't have taken this to be the solution, but it is what it is.

...and just to frustrate me even more, the following warning appeared again today - ironically, asking me to make a secure online payment.....if only it were that simple: 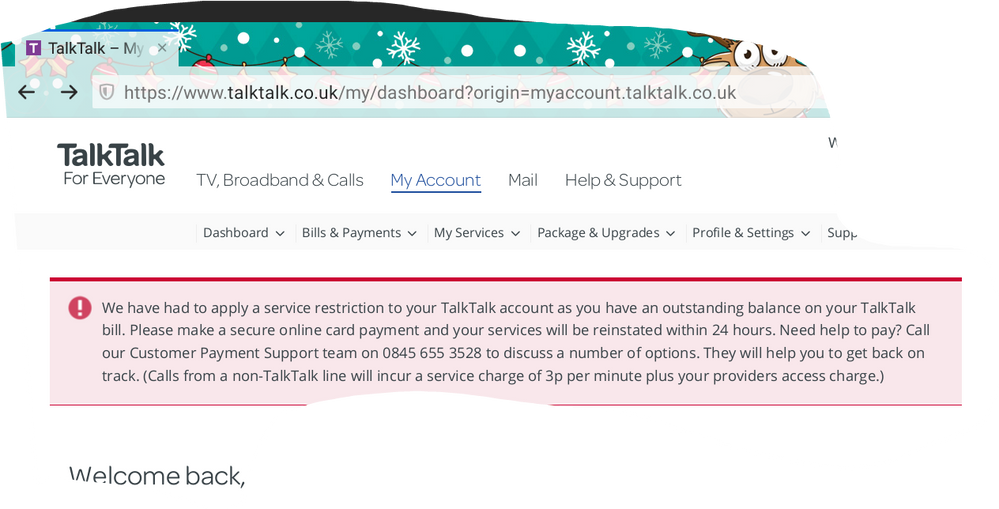 As a test , Can you try a different browser and also ensure Pop up blockers are disabled for that particular browser.

@Arne-TalkTalk  Thanks. The online Mobile bill payment option is still not working today The message to call the 08 number that I called previously (and was charged £0.55 for doing so) is still showing today. Online chat are unable to take payment. Telephoning the 0345 number to make payment isn't ideal with hearing issues. 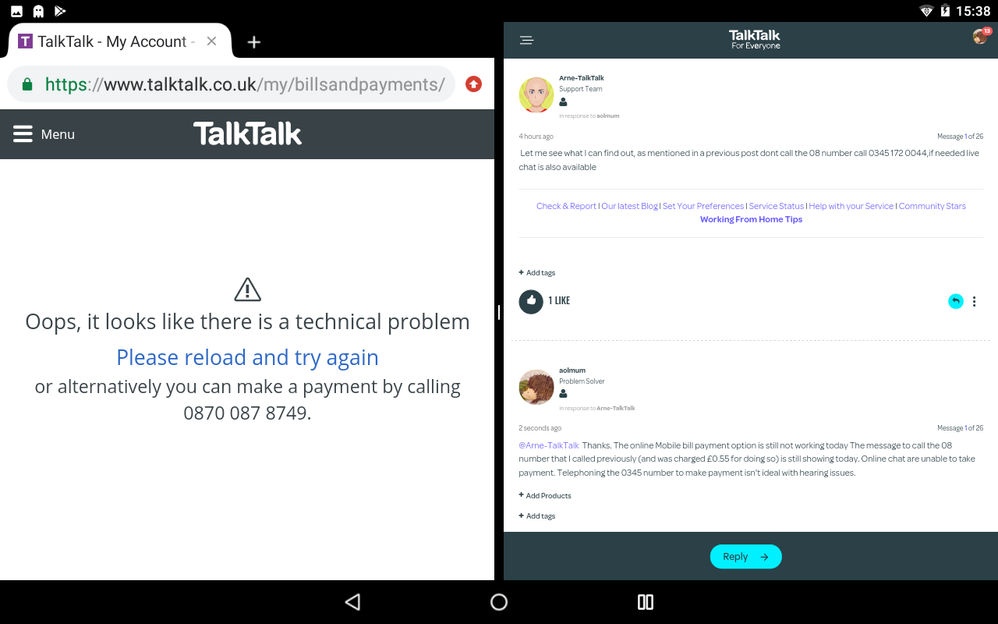 Let me see what I can find out, as mentioned in a previous post dont call the 08 number call 0345 172 0044,if needed live chat is also available

Unfortunately, it doesn't look as if  'My Account Team' has fixed the problem yet. Frustrating, as next payment is due. This means I will have to telephone again, which is not ideal, rather than pay online.

It makes it a bit pointless having 'vulnerable customer' status, if an online payment option that should make paying easier for me and others with hearing issues, doesn't work and isn't fixed in a timely fashion.

Thanks @Arne-TalkTalk . Hopefully you can feed back their response too, as I would like to pay via my account in January (it would also be helpful to know if it is likely the resulting £0.55 charge can be cleared).

Easy to pay online, or so it says!

I will escalate it to the My Account team.

Thanks for pointing this out

@Arne-TalkTalk, is it possible to check for us that the 0870 number is correct advice, showing up in response to a technical error, as described in @aolmum's thread above?

In addition, regardless of My Account clearly saying 'full payment is due on 18th Dec" (as is clearly seen in screenshot earlier in this thread), and me, despite hearing issues and the technical error page giving out an apparently inappropriate telephone number, percevering and eventually, after going around in circles on chat and being passed to different people on the phone on the 16th and 17th,  getting through to the correct number for Mobile payment collections yesterday teatime 17th Dec and making the £1.75 payment, I apparently have an outstanding balance.

If it wasn't all so ludicrous it would give me a good laugh, instead it is almost driving me to tears of sheer and utter frustration. The irony is that I only have the mobile for emergency use and occasionally to contact family(and even then, more often by text), as with my hearing issues, I generally avoid using phones, be they mobile or landline.

Moving this back to the billing section of the forum, @aolmum, for that notice with the phone number to be checked and clarification about charges.