Just received email about the increase of monthly charge due to CPI inflation. But refer to the article in attached image, the Fibre 65 plan is not impacted, then why my monthly charge still increases?

is there any early exit fee within 30 days since the CPI inflation email if I switch to other supplier? My current Talktalk plan is due on Jan 2023 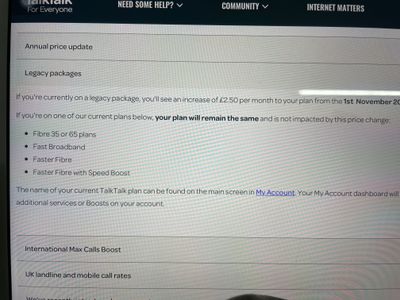 Just to confirm there is no free cancellation due to price rises.

The Help page has been updated.

That November price rise had nothing to do with this and, in fact, other packages had already had price rises that were not then to be repeated that year, @Alexwu0512. So, Fast Broadband had an increase last March / April of £2.00 on the full price product, for example.  It was therefore NOT subject to a further increase in November.

Some products escaped an increase last spring, hence the increase for these later in the year.

The April 2022 CPI related increases were announced and displayed in the Ts&Cs from March 2022.

Companies seem to allow their Ts&Cs to evolve these days by simply updating them digitally, rather than in the old days where they would have to abide by the printed, hard copy version. It's rather a disturbing trend!

So this CPI etc price rise was not in place if one renewed in eg January or February last year, but nevertheless was effective in the Ts&Cs from March.

For the lump sum spring / November increases, one could challenge these within 30 days of the notification email. This CPI etc one was displayed a full year ahead.

If we stayed after the 2021 price rises, we are presumed to have accepted what was coming by sticking around, perhaps with a sweetener / renewed and therefore started a new contract to which these new Ts&Cs would unquestionably apply.

Not really out dated, it can be still found in current article, please see below link

That looks like a very old screenshot from which you have conveniently left out the date. Your current plan is affected, you will have to pay early termination fees if you choose to leave.