I feel I am getting no where fast with this issue and the telephone support I have had so far to be honest, just doesn’t listen.

I have been having difficulty getting access to my account online (Future Fibre 500) for the past couple of months, each time I try to log on I get the following error. 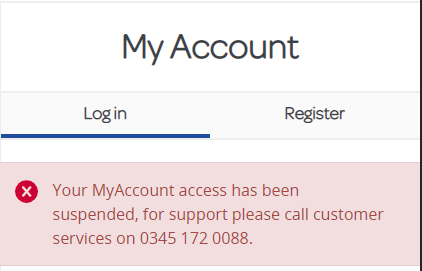 I have called over 4 times on this issue, the first couple of times I got told that they would rectify this issue on their end and to try again in 24 hours, each time nothing worked. Tried changing my password etc.

I finally managed to speak to a customer advisor about a week ago, who saw this was suspended on their end and removed the suspension but was unable to tell me the reason it was locked out. However, today I have received a text saying my bill is late and I must pay straight away and to do this online. However, as you can guess its again suspended.

My payments are set via Direct Debit and the past couple of payments have been paid and money has been taken from my account, this must be prior to the portal issues. However, speaking with support today (Spent over 30 minutes going over the same things over and over) they said that my bill invoice was sent by email (past bills have but this one hasn’t) and that will have to pay over the phone.

I asked the question why my direct debit has not been attempted as funds are in my account, but she kept saying that I can get my bills sent via post but that would cost extra, and nothing about why the payment has not been taken.

Who can I speak to, to get this rectified as I don’t want to be spending time each month trying to get someone to understand what issue I have to reenable my account access or to waste time on the phone trying to pay my bill, when it should be automatically collected.

The internet connection itself is a credit to your company (Via CityFibre) but the admin side of this is so far lacking… and very frustrating.

Thanks for the update.

Still have access to the portal and payment has been taken, so all good so far.

I'm sorry for the delay. Is everything still ok since your last post?

I can confirm I can now access this again.... For how long until its suspended again. God knows.

Bigger question is, why has it taken so long with so many calls etc to customer services for this to be resolved and numerous calls from a manager saying they are looking in to it.

Can you try again for me please in a couple of hours Ive requested the my account team to look into this.

Ahh just read that as only viewable by myself. Will do that now.

You could put it in the Private Notes section, @Atomic4l.

Go via your avatar/name; settings; from the drop down menu that starts with "email" choose Personal Information. Private Notes is at the end of that section.  SAVE CHANGES.

I don't know where to add it in my profile. Cant see a section for it?

I meant escalating a complaint as an individual (not via your company).

I am awaiting news of account too, but I will continue to keep calling and querying all the time.

Unfortunately, nothing we can do from our companies standpoint as its residential. However I have had my bill emailed to me today, which is an improvement from last month 🙂

If you work in the industry ,have you thought of bringing this to the telecom ombudsman, or to financial complaint authority. ?

It seems that it's completely against any form of customer rights or contract..

Nope still the same, Had multiple calls from a Manager as I raised a complaint (Not at the correct times they agreed to call, multiple times missed days or timeslots, but who expected anything else)

I still get my account is suspended when I log in, I advised on each call I received from the complaint, that its getting closer to the next bill payment time and if its not taken by direct debit I will get chasing emails and texts when its not my fault. Causing wasting calls to support and stress of it all.

Shouldn't have to muck about like this.... I work in the telecoms industry, dealing with multiple ISP's resell etc and never have this kind of issue.

Wondering if you ever got this resolved?

I'm on fibre65 and I have no My Account either.

I am noting now that it seems these account problems are going back months.

I have still to understand if ANYONE has a future fibre account ? No one on the forum has said if they have...

The only option at this time is to call the future fibre team, I'm really sorry.

Setting up the Accounts and running it correctly seems to have been a problem for many customers with this new service.

I'll move this thread to the billing section of the forum, in case community support can help from there.

Let us know if you succeed using the number I just posted here, @Atomic4l.

I wish it was that simple, Tried this over the phone and each time get pushed back to the customer services number. 😞

Faults on the physical connection are through that support but billing is customer services...

You will be pointed back to the Future Fibre support team, @Atomic4l.

There is the option of Chat, during the day. See near the bottom of this page: