I am 13 months into a two year fixed cost contract. I have today received an email advising my monthly costs will be increasing by £2 a month; not a vast amount of money but unexpected.

Can TalkTalk increase costs during a fixed cost contract? If so can I terminate the contract without penalty? Pleased with the service overall but there are some keen offers around and it may be worth me moving.

Mine was over the phone, but I am sure it would be possible for Talktalk to track back to listen to the particular call, @Nexster.

I'm going to give it a go, taking a look at the arguments I have put together and various options.

Haven't received the email yet.

People are talking about being allowed to leave by 1st April without penalty, but it should be 30 days' notice.

Hopefully emails that come in from now on will show the date relevant to the email, unless they date it back to the news about prices notice now appearing on the website.

If you renewed over the phone I think its going to be a lot more dififcult but if you used live chat and kept a copy of the transcript then for how long it takes to have a look at it I think its well worth doing.

Some peoples contracts will be 18 months others will be a 24 and like you say at £2 a month while it doesnt sound like much it does start to add up.

If you dont ask you dont get so for me what have you got to lose by asking?

I agree that they knew what they were doing.

They just waited for someone else to jump first and see how much they were increasing before making there move.

Ultimately thlough there all as bad as each other in doing things like this just like companies are with giving new customers better deals over existing loyal customers.

Your right in saying that this is whats going to pay for the new infrastructure as well which I wouldnt mind as much if it wasnt for the fact I have no idea when FTTH might appear in my area.

Like you say im already on the fastest package avaliable to me and so options are very limited short of switching providers for the same speed as we dont have Virgin here either.

Personally I dont see the point of moving to another provider even if they were offering a voucher in the deal.

To much hassle and while the customer service isnt great here the product itself for me at least works fine.

Ive had issues for sure but im not totally convinced that any other isp would of got some of them resolved any quicker.

Can we complain to the Advertising Standards Authority as the adverts on the Tv etc. were misleading.

Come back Jeremy Corbyn he was right put Fibre in everyone's house for free.

No lets just waste the money on a big train set (HS2).

@Nexster, I think that the dilemma is whether there's anywhere to run to or try to make your case on an individual level, and, on a case by case basis a few customers may win the argument for their individual deal.

Or just live with it as it might not be worth the fight. Over a year, however, £2.00 on the Fast Broadband package represents a 10% increase or so, depending on precisely what deal people got.

It's so far above inflation that, by the terms of even the older version of the contract, they have to give us the option of leaving.

Could be worth fighting on grounds of principle and the short notice given of the changes. For any Fast Broadband packages taken out since last November (when Talktalk started the rebranding of the Fibre packages, free upgrades to those they could move onto Fibre, those strange new ways of paying in advance etc) the agent must have already known what was in the pipeline and didn't tell us.

I did think it was strange that whenever I got poor speed test readings the Service Centre always suggested that I might try Fibre....regardless of whether it was available. For those for whom it actually was an option, they were being nudged in the direction of upgrading, thereby minimising the risk to Talktalk of quite so many customers opting to up and leave when news of the imminent £2.00 hike hit.

Talktalk knew exactly what it was doing at every step...regardless of whether the pandemic continued on the level that it did.

They have seized the opportunity to change the business model. The fixed price package model was probably unsustainable.

The government has been setting telecoms all sorts of new targets for speed of connection etc.....this new model would appear to be how the companies are going to achieve it.

However, it's not fair to whack the immediate increase onto a Fast Broadband service that can't be upgraded because nothing else is available....so, coming full circle, we have the option to leave.

I have not had the email myself as yet at least but I just checked my transcript from when I renewed my contract and I was told this.

Your Fixed Price Plan will have no price increases on the monthly charges during the minimum contract period, this does not include Boosts or other charges such as films, calls or calling features.

So for me if they want to increase my prices then they better take it up with Wendy.

The problem is all laods of other providers are putting up there prices to.

Virgin have just increased theres and BT, EE, Plusnet  and Sky are in the process.

No idea on Vodafone but as there customer service is rated the worst I wouldnt even think about using them just to try and save a few quid when ultimately there prices wil incnrease to as its just useally a case of who goes first and then everyone else follows.

Its a shame Zen are so much more expensive a month otherwise id switch back without hesitation.

The customer service is very good but not at that price!

If you look earlier in the contract, they have now slipped in the bit about >CPI  annual increases.

Because everything is done digitally, they can change things by sleight of hand.

I have a copy of the Ts&Cs from a few days ago, @TallTrees, as well as the changed Ts&Cs from 1st March

Message 388 of 411
Hey @Gliwmaeden2
Just popped in from another similar topic
and thank you for the Clause above ~ I knew it would be there somewhere!
TallTrees
Happiness is Bee shaped
3 Likes
Reply
Options

The trouble is that clause 16 in Ts&Cs let's them do whatever they like "for business reasons":

They give us the offer to leave within quite a short time frame when it's to our "material detriment". That's supposedly the "fair deal" and I suppose that, because it's always lurked there in the Ts&Cs, they can always turn around and say, "well I told you so".

Thanks for the tip  @mrsabtn about getting it as a credit.

We are all customers here.

A reply copied from Martin the gmtv guy that helps with money matters etc...

On the point of £2 charge per month on fixed price fibre plans.

I was onto them for nearly 2 hours this evening, furious is an understatement, i have managed to get £26 equivalent to the £2 price increase covering the remainder of my contract at 13 months, but not until i demanded a manager and threatened ombudsman intervention, also got £10 credit for the waste of my time. Still not happy and may yet leave, but will almost certainly do so at the end of this contract its left a really sour taste with me. I'm at a loss as to how they can just simply withdraw a contract with no reprisals. Definitely stand up to them because from a blanket refusal i think they could see i wasn't going to accept that and i got those charges reversed based on the length of my current contract, but disgusting i even had to do that.

I too recieved said email.. I'm on fixed price etc.. I am not happy at paying extra £2 because the sudden (past 12mnths)uptake in Internet usage.. What a load of twaddle that they try and make you believe.. Talk talk that is..

1.cant use a domestic service for buisness.. Its in their terms and conditions..

2.people have paid extra to boost their Internet during this time because of using the Internet more or number of users at home Increased..

3.They've made millions because people moving to them as they were the cheaper option with good download speeds etc.

4.im not paying for little Emily's 45min zoom schooling each day... Her pigging parents are...

And considering they gurenteed the price would not increase when you take the fixed price package.. Talk talk are actually breaking the contract.. I always take screen shots etc when taking new contracts and there was no smallprint to this gurenteed price package..

So no I'm not paying it I will dispute it and considering when I went from AOL (talk talk) to fuel (talk talk) to talk talk and got double dipped charged by the same company and pulled them up on it and I won.. I wonder what they'll say...

Seriously not happy in a time people are losing jobs, getting paid less, going on benefits.. And the people who are making millions are supermarkets and Internet providers.. Bloody parasites the lot of them...

AllyM
Philosopher
In response to ajg007

@ajg007 wrote:
Do you think that's just alloy to get you to stay until after 1st April, then your stuck as it'll be to late to leave without charges?

In my experience TalkTalk aren't really as sneaky as that, but they often get things wrong.

I suspect it's more likely that since this announcement has just come out today, the chat operators haven't actually been told about it.

Message 395 of 411
Do you think that's just alloy to get you to stay until after 1st April, then your stuck as it'll be to late to leave without charges?
0 Likes
Reply
Options 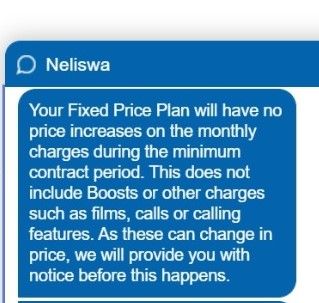 This is from Chat where I was told my plan was fixed with no monthly price increases. Hmmmmm.

Useful article here about this:

Ie been using mine more as I'm out of work, so only using it for job search and lockdown entertainment....

Not really welcome for me either. I am still working (not from home) and so not using the internet more plus no pay rise last year due to a global pandemic (something which was outwith my control). Not much we can do though.

Well. I’m not using their service for home working being retired over six years, in fact I was retired when I started my TalkTalk contract.