Re the response from Karl to my earlier post on Trustpilot regarding your failure to provide vouchers for the Amazon Echo Dot and Smart Plug as promised when we renewed our contract with yourselves in May. We would like this issue resolving without further delay. We have been waiting (and chasing) since our contract renewal on 26th May.

The service we have received from talktalk this year has been far below the standard we would expect.

We put a formal complaint in a month ago to concerns@talktalkplc.com [Incident:210728-000568] and received a reply on 28th July ensuring that Nompilo Sithole had raised an escalation and advising we would be contacted within 7 days. As yet we have had no communication. This really is not acceptable.

The echo dot and smart plug were supposed to make my chemotherapy treatments and recoveries easier but instead I've had to find time to chase false promises.

I will now be leaving daily updates regarding the progression of this issue on Trustpilot and Facebook.

Unfortunately that's the problem, we are having issues activating them at the moment, we are working on it.

Sorry @LinzyH for the delay

No envelope icon under the avatar means Personal Messages are not yet enabled. @Arne-TalkTalk can switch those on for you.

Sorry were are having a slight issue sending PMs at the moment.

There is no envelope icon in the my avatar. 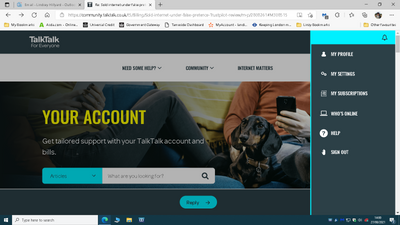 Looks like LinzyH is using a desktop Internet browser and tapping the Mail link next to the avatar rather than her avatar. It's not an email issue. Just needs to select the avatar and then the envelope icon (if present) to see Personal Messages.

Not sure what has happened there, @LinzyH, as I would be able to simply open the personal message directly from there, having clicked on the envelope.

It's possible to change the email address linked with the forum by going via your avatar/name; settings and a drop down menu that starts with "email". SAVE CHANGES.

That's normally only relevant for receiving notifications and forms.

Hoping that CS @Gondola may be able to advise you further.

So I can see the envelope but it takes me to the talktalk mail login page. I don't have a talktalk email account and it won't accept my live account.

Is there an option to receive mail to other email providers?

Top right near your avatar, can you see a number? If on a mobile, hold it horizontally to see an envelope, or just click on the number and you should get through to the envelope to click, @LinzyH.

Personal messages need to be enabled. Check in your profile settings if you can't see any message etc, and staff may need to resend it etc.

Can you advise how I access my PMs on the community please?

I can help I first need to confirm some security questions.

I have sent you a PM on the community.

I'll move this thread to the billing section as it's more to do with your account than the Broadband service itself.

Please look out for a reply from TT staff  - if they don't reach this on Friday it will be after the weekend.

My landline number has now been added to my profile as requested.

My landline number has now been added to my profile.

Sorry to hear that this has been stressful to chase up, @LinzyH.

Staff will need to identify your account from your Talktalk landline number. This needs to be added to your community forum profile details.

Your thread is in the queue for attention. Forum staff reply during business hours Monday-Friday.

Please look out for their response.