I’m moving abroad on the 8th of July and tried several times to cancel my contract weeks in advance. It took me 3 phone calls and a few rounds of talking with agents on the chat to finally get it confirmed in an email. This was the 21st of June.

I got in touch with customer services today to find out why I hadn’t been sent a return slip so I can return my router. It’s too late now to reach my place by post before I leave, so I asked if it could be sent to a relative’s place for them to send the router back after I’ve left.

At some point the agent tells me that the reason I didn’t receive a returns slip is because I first need to cancel my plan, and it’s still active  - hang on?! I thought I had already cancelled?

Thinking this was a mistake, I communicated with another agent in chat, who seemed to have no problem with my request. I gave them my relative’s address and they said it was all confirmed.

About half an hour later, I get an email from TalkTalk, congratulating me on the changes I made to my package, with a new plan starting this Friday - which is the date I actually need my plan cancelled!

I’m worried that I’m going to face a whole load of charges and be owing TalkTalk money when I put in my cancellation notice weeks ago and tried to do everything correctly.

TalkTalk has made it almost impossible to cancel their broadband.

I have made a note on your account that you no access to the property. You will not be charged.

Unfortunately the returns slip was still sent to my old address and not my relative’s. I really want to return this router and don’t want to be charged £50.

I contacted customer services through the chat yesterday and was told that it would not be possible to send a returns slip to my relative, but they could arrange for a Yodel courier to pick up the router from them. I haven’t received any email or anything about this yet. I hope I was not lied to.

Can the router just be sent to an address with a note of my account number?

Sorry for the delay

I have asked our provisioning team to check on the cancellation request the account is still active.

It’s now the 10thstill saying the cancellation is pending:

Make sure that you have put the alternative address that you wish the returns bag to be sent to in the Private Notes area of your community forum profile, @Nals1.

Then, at least, the router can be returned and you'll avoid the fine for not returning the equipment (assuming the contract is properly cancelled).

A cancellation is described as a pending item in My Account, but it is worth getting that checked by staff too.

Go via your avatar/name; settings; from the drop down menu that starts with "email", choose Personal information. Make sure you have put the account number in there.

In Private Notes, at the end of that section, add the address that you wish the returns bag to be sent to. Also any other important details. SAVE CHANGES.

It's best now NOT to post further before this thread reaches staff as it will actually delay its progress in the automated workflow.

Look out for their response and reply on here then - any notification emails will be from a No Reply address.

I received an email confirming the cancellation that day so I thought the matter had been resolved. 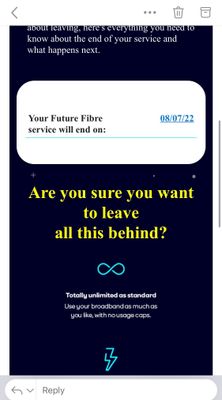 It's a shame that you didn't follow up on your earlier thread, @Nals1.

Staff did respond back in June, here:

Fingers crossed, this will be picked up tomorrow. Staff are only on here daytime, Monday to Friday.

Thanks. I’ve updated my details in my profile now.

Please add your Talktalk landline number to your community forum profile details, @Nals1, so that staff can identify your account.

They'll hopefully get back to you about this before the 8th....