I have been a TalkTalk customer since 2007. For many of those years we have continuously subscribed to the Anytime calls package option, now called the "Unlimited UK Calls Boost". It used to be quite cheap but has increased in recent years.

I received an email reminder about the boost expiry in August 2019 inviting me to renew the boost for another 18 months at exactly the same price. The message said that it would renew the boost "with one click", which I duly carried out on 9/9/2019.

I checked "My Account" very soon after and found that there were now TWO Unlimited UK Calls Boosts present. I deselected the original one and noted that the new one was still enabled.

On 13/9/2019 I received an email which simply said #BOOSTS_REMOVED# and no details as to which boost it referred to, whatsoever. I took that to be an acknowledgement for my manual removal of the original boost due to end on that day. The message also stated:

"If the changes aren't as expected, its easy to go back to My Account." - in my case I fully expected that change as I had terminated the original boost. The information supplied in the message was minimal & not very helpful in alerting me to something unexpected, which then happened.

Imagine my surprise on 15/10/2019 when I was presented with a bill totalling £103.46! A check of My Account revealed that no Unlimited Calls boost was now enabled, resulting in this sudden jump in call costs. Normally we expect ~£40/month.

In addition, on the October bill there were several transactions referencing the boost(s) which I do not fully understand & would like some explanation of:

I am absolutely certain that I only disabled the older U/L UK Calls boost, which at that point only had three days left and I did not want to lose the £5/month renewal offer. I can only assume that the billing software mishandled the unusual case where two instances of the same boost were simultaneously present and removed both products, after I removed just the original one.

Any help from an OCE to direct these details to the Billing Team for a resolution and possible refund would be appreciated.

The detailed timeline is shown below:

No problem, post back if there are any issues.

OK thanks again for help Arne. I've done as you indicated and await results next bill.

The refund was rejected as your latest bill has been taken from the credit that was on the account. so the amount requested wasn't available , the remainder is now left which you can request.

Sorry for any inconvenience caused

I thought that this was all done & dusted, I was wrong:

I received this email and there have been attempts to contact me by phone from someone at TT  from a garbled line: 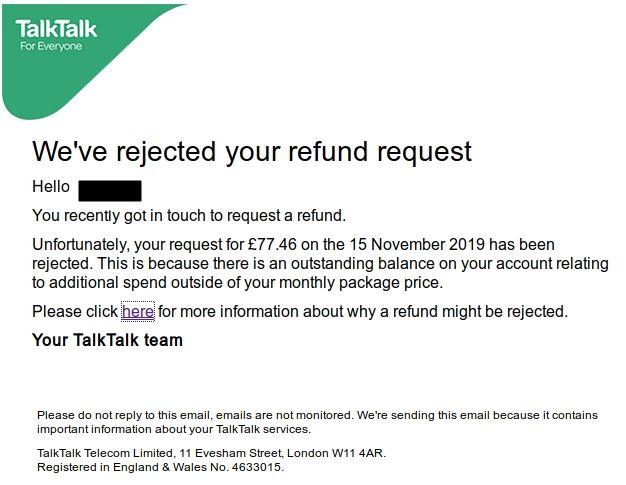 I do not understand how that fits in with any of the reasons for rejection on the same page:

Any further help with this appreciated greatly...

I have updated your discount for the anytime calls boost,

If you log into My Account you can request the refund for the cleared calls, unfortunately the full direct debit was taken overnight.

Sorry if this causes any inconvenience.

Many thanks Arne & thank you for your help.

Of course, that's a more than acceptable solution, which could not be fairer!

Ive checked the account and its difficult to see why the both the pending boost and the current boost cancelled, Because of this we will clear the calls charged.

In relation to the boost price, we can modify that discount price in the next 24 hours.

Any Update on this please Arne?

I will look into this for you and get back to you.