Accepted on eero mesh wifi trial only to be told I won't be participating!

Having received an email asking if I'd like to take part in the talktalk eero mesh wifi trial, I filled in the online form and was pleased when the next day I received an email saying I had been successful (see screen capture). I clicked the link in the email that said something along the lines of "welcome to the trial, we will be in contact soon."

That was the 10 May, fast forward a month and today I received an email saying "Unfortunately, you weren’t selected to join our eero trial due to the high volume of applications." (see screen capture). 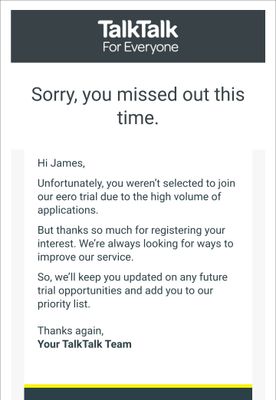 Is it just me or does it seem a bit stupid to accept someone for a trial only to tell them a month later that they won't be participating?

In exactly the same boat as before , so what what the  whole point of being told to download the EERO APP if they had NO intention of having so many applications sent in ,,, in fact if they only needed 400 why send out 4000 invites for example ,,, absolute waste of time, thanks TALKTALK

I'm sorry to hear this and I will feed this back now.

@I8this So, seems I'm not the only one then!? As I only received the email this evening it'll be interesting if anyone else has been accepted then rejected!

Also, I did do a quick search of the forum but seemed to have missed the other post - thanks for sharing.

@chiggity   similar responses in this topic, yet another case of the left hand - right hand syndrome by TT.

If case you have forgotten the Do’s and Don’ts. There are members that have. Remember:-Be yourself and tell it like it is,. Be courteous to other customers. Give others the benefit of the doubt. Update your community profile. The Forum Guidelines apply to ALL members there are/should be, NO exceptions. If you have nothing nice to say, then say nothing at all. Now a wizard.
1 Like
Reply
Options