Faulty Router, keep having to restart

I have a faulty router. I keep having to restart it at least once a week otherwise my connection speeds drop drastically. I want it replaced so I tried contacting customer service. However I can't find any customer service information on this website. Had to go to a third party website to find out what the phone number to call was and even then I always get that the customer server line is closed. Can't find anywhere on this website what the opening hours are. I'm told there is a live chat somewhere too but god knows how I access that.  As a result, I'm forced to make a post on this community forum. TalkTalk? More like talk about terrible customer service.

Thanks for updating your Community Profile 🙂

The replacement router is on its way, please allow 24-48hrs for this to arrive.

Thanks Debbie, added those info now, please check if you can see them.

Please can you add your name and TalkTalk landline number to your Community Profile, I can then send the replacement router.

Hi Debbie, I think that would be helpful thanks

Would you like me to send a different router for testing?

I'll re-escalate this thread for you, @bottom_gear.

The problem occured again today. I couldn't test out changing to channel 11 as I for some reason I can't seem to connect to the 2.4Ghz band of my router, only 5Ghz. It keeps complaining the security key isn't correct. Even after restarting my router it would not let me. Still think this is a router issue and not a user issue.

Please let us know how you get on 🙂

I'll give that a go next time it happens to see if it makes any difference. 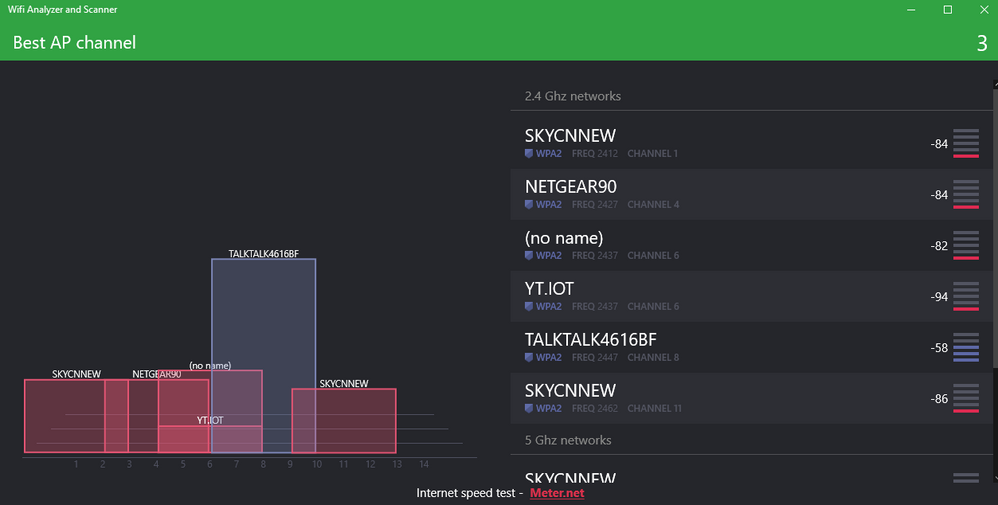 It is impossible to comment without seeing the screenshots from your analyser. If you would like to include them I will look into it for you.

I'll re-escalate this for you, @bottom_gear.

Staff will be back from Monday.

Apologies for the lack of update. The problem didn't manifest itself again until today. When the problem occured, I used a WiFi analyzer to check which WiFi channel was best and switched to it in the router settings. However, this made no difference to the problem. Keeping the channel fixed, I restarted the router and again my speeds were back to normal. So it does not look like a problem with congested WiFi channel.

Yes I did Karl, and they were pretty much useless. KeithFrench here has already done a much better job of providing suggestions on what the problem could be. I am waiting for the next time I hit the issue to confirm whether it's due to congested WiFi channel.

Did you contact our colleagues via Live Chat for support ?

Not at the moment, but that's what I plan to do in order to see if the channels are congested. I think on Android there are apps to do that.

See my post #6 which answers that. I wouldn't have asked if it wasn't relevant.

Are you using a WiFi analyser then?

Thank you for the more thorough answer. It's difficult to know why that information is required unless you tell me how it can help with the diagnosis. It's the Black WiFi Hub DG8041W. On the router page it will say 31 Mbps, in speed tests it would be around 150kbps.

Congested channel may be true, this is something I should check next time it happens.

So far I am trying to answer your problem on a very generic level, because I am still waiting on information from you.

What speed is quoted by the router, I have asked this before because it is crucial to know if that is slow before I can really answer you. However, as you have now told me you are connecting via wireless, I will answer why the router may not be at fault.

The very fact that the router speed improves after a reboot means that it is highly likely (again bear in mind I do not know if the router's speed is low at this point) to be WiFi interference.

Normally a router looks for the least congested WiFi channel on boot up, so your speed is OK. Other routers in your area start broadcasting out on channels that interfere with yours and down goes your speed. This can happen because other routers change channels for all sorts of reasons, plus environmental factors come into play here. What most domestic routers do not do, is subsequently recheck the WiFi channels for congestion and change the channel for you (despite having the channel allocation in the router set to auto), hence why you have to reboot it again.

I can offer a lot of help to resolve this issue if you want it, but I will need you to specify the make/model of TalkTalk router that you are using, plus the speed when logged into it.?