High latency and intermittently poor speeds on all devices

I have had issues with our internet since Tuesday (05/01) and have spoken to TalkTalk through Twitter and Live Chat, but feel as though I may get more detailed help through this forum.

TalkTalk have advised that they will send an engineer out next Tuesday (12/01), but we are working from home and need a stable internet connection way before then. TalkTalk have done tests on the line and have found no issues, hence why they have suggested sending an engineer.

From Tuesday lunch time we started to experience very slow (100ms, 0.5mbps down, 7mpbs up) internet speeds compared to our normal (average 10ms, 35mbps down, 10mbps up). Since Wednesday morning, download and upload speeds have at times returned to normal, but drop down to sub 10mbps on both intermittently. However, latency has remained high and spiking even higher (averaging 50-70ms, sometimes dropping to 40 and spiking regularly at 80-110).

Apparently the Huawaei Home Hub that I have does not support 5ghz band, although I was only sent this router in June, therefore TalkTalk are sending me the same router with 5ghz band compatibility.

Nothing in my set up has changed in the past month. I added a powerline adapter so that we did not need a 25m ethernet cable from the router to the PS5, however I have not had any issues with latency or speeds in the last month and I have been using it. I have just turned the WiFi extension on the powerline off, but this has made no difference (It's an TP Link AV600). I have included speed tests below on three different devices, the speeds on PS5 are always running at c35mbps due to the powerline ethernet connection, however, it does not show ping, which is measured continuously via games when playing and it's the same story, sitting at around 50-70 and then spiking, causing issues. I have changed DNS servers on all devices and this does not help, so I have changed them back to auto. Any help would be greatly appreciated, unless this does seem like a router specific issue, or something that an engineer will be able to identify. 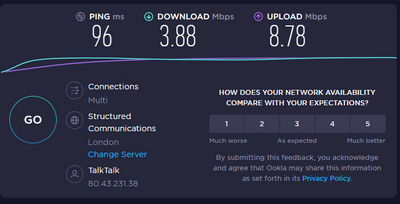 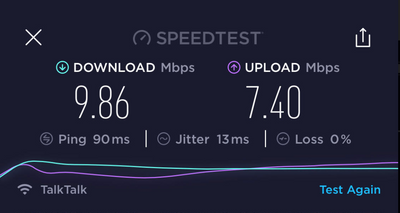 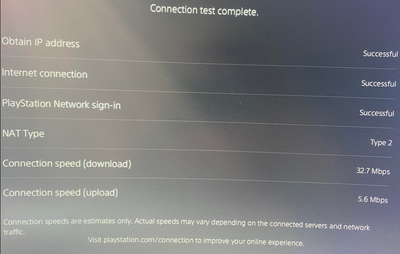 Thanks for confirming this. Are you now in contact with our Tech Team or do you still need us to look into this further for you?

@Michelle-TalkTalk sorry for the late reply.

I run my PS5 through a powerline ethernet, this is experiencing low speeds.

I have connected work laptops and a home PC via direct ethernet and they are the same speeds. Believe me, I have tried everything, there is no way around these poor speeds and high pings.

I'm sorry to hear this. Can I just confirm, do you have any devices connected wired just to see how the speeds compare? If the speeds are ok when connected wired then we can focus on the wireless connection and be able to offer more assistance on this.