After at least a week or so of slow speeds I ran a speed check yesterday and today on my line and got the result below.  Since the guaranteed line speed is 54mb can you please check the line for me please? 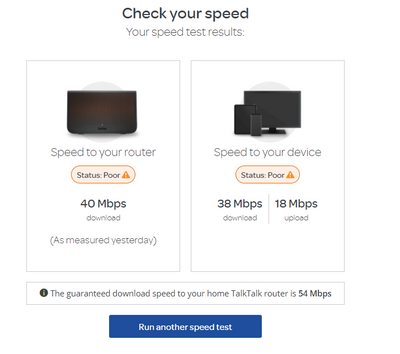 I thinks it's more likely to be good old DLM.

Do you think the additional boost in speed is down to the fact that the effects of my covid jab are kicking in?? 😉

Thank you for the update and I'm glad to hear that the speed has increased 🙂 Please let us know how the speeds compare over the next few days.

Thanks for asking; my response would be Holy Moly!

Apparently, no one did a reset of the speed to the line which was down to 43MB due to the automatic reduction in speed due to errors. So there was no chance of getting higher speeds.  2nd engineer recorded 72MBS to the socket after reset.

However, there are currently NO phones connected to the network, so this may cause a little degradation later.  I've also ordered a new ADSL cable to replace the existing phone cable, on the advice of the engineer. 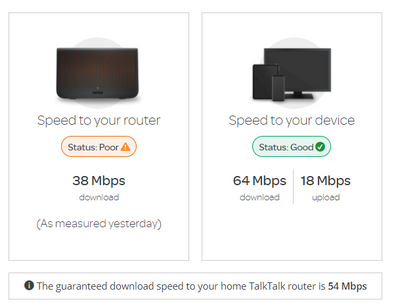 Luckily for me the engineer also timed his visit to fit in between my two meetings.  So it all worked out well; apart from him breaking the new faceplate; which no longer fits on to the backplate and provides a connection!  This won't be an issue when I get my new adsl cable.

How are you getting on?

Thanks @Gliwmaeden2  - I guessed that.  The original request was made Friday afternoon.

Since there wasn't a "full working day" I didn't bother wasting my time speaking to the RoboChat.

Guess I will have to manage some home.

Unfortunately we have not seen your request in time as we cover Monday to Friday. Did you manage to get through to our Live Chat Team to re-arrange this?

Staff are not on here at all at weekends, @McParland57.

Out of hours the Chatbot will start to process your message. It may nevertheless be too late to avoid being charged at this stage.

I'm guessing no one has picked this up?

I've just had an important work meeting land for Monday. Can you please move the appointment to Tuesday?

My instruction from the first visit still stands.   This is not a new problem.  It's a continuation of the initial problem.

I've not done anything to make it worse.

It annoys me that TalkTalk are more interested in some measly process to ensure that costs get pushed on to me rather than fix the issue.  All I've seen  Talktalk so far is, "wait and see" with no explanation as to what is going on.

If you'd like me to arrange the engineer visit can confirm:

Chris, I still want TalkTalk to fix the problem.  Why would that have changed?  How you choose to do this is beyond my knowledge.  You do what you know best?

OK, would you like me to arrange another engineer visit?

I'd like you to fix the issue I raised please.  I don't understand how waiting will help, since the "fix" actually made it worse. and nothing has settled down in the last 48 hours. 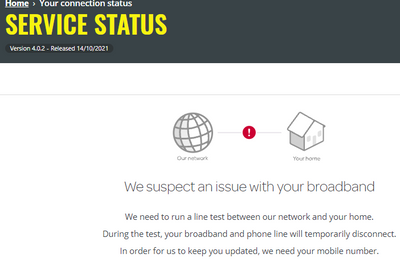 Sorry to hear that it's no better

The speed to your router at the moment is actually 30.7Mbps, there was a profile change in the early hours of the morning

Would you like us to arrange another engineer now or would you like to leave it over the weekend to see if there's any improvement?

It's no better guys. It's actually worse than before "the fix"

1) I've used the Talktalk line checker and it seems to think I still have a fault, I thought you said it had cleared?

2) I don't understand how "the speed to my router" can stay the same, after the fix, but the "speed to my device" has dropped significantly since nothing has changed between the router and device. 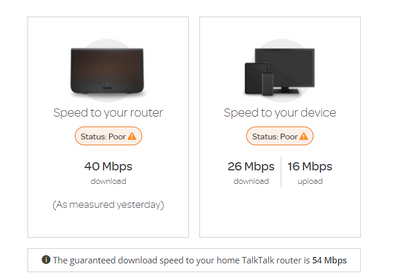 I can do, but it's not going to be until 6pm tonight, at the earliest