So many support hoops 😭 What's the trick to getting an Openreach engineer to come out?

Do I just flag down the next Openreach engineer I see out and about and offer him a pint?

I have the TalkTalk Fibre 150 package (G.fast 160Mbps). For a while now I've been getting only about 80-90Mbps so decided to finally look into it. Turns out the ZTLink MT992 G.fast modem's LAN port is refusing to connect higher than 100Mbps.

Multiple confirmed working CAT6 cables and devices have been tried but it just won't connect at 1000Mbps any more. So despite the line speed of 156Mbps, I can't get above ~90Mbps on the LAN. Seems simple enough to fix, just need a replacement G.fast modem.

Cue a long drawn out chat session with support that included many speed tests and "are you sure there's nothing else using your wifi" frustration. Also, shock horror, I'm not using the TalkTalk WiFi router so that MUST be the problem! Eventually, okay a TalkTalk engineer will be sent out. Great!

TalkTalk engineer arrives and insists on trying a new TalkTalk WiFi router and faffing about doing "line tests" despite me showing him a laptop connected directly to the LAN port on the G.fast modem, working, but only connecting at 100Mbps. Eventually he leaves saying the problem will be escalated to Openreach because the G.fast modem is theirs.

It never went further, no Openreach engineer arrived and I got billed an extra £50 because the "fault wasn't with TalkTalk's equipment". Cue another drawn out chat session. Thankfully they credited my account the £50, but instead of simply carrying on where the last call out went we have to start again with the "have you turned it off and on again" shenanigans.

If the router has been ordered then it will be on its way. There should also be a returns bag so you can send this straight back.

Right, will do 👍 Thanks again 🙌

If the router has been ordered then it will be on its way. There should also be a returns bag so you can send this straight back.

If you do experience any further issues then please let us know.

Openreach engineer Jason was here just after 8am. Did his due diligence and first verified that all was okay with the line, we replicated the issue I'd described, he swapped out the ZTLink modem and:

Thank you so much @Debbie-TalkTalk and @KeithFrench ! Now how do I get TalkTalk to cancel the new WiFi router they are sending me? 🤔

Ahh you're welcome and I'm sorry about the issues you experienced trying to book this engineer.

Wow thanks Debbie. Amazing! I'll let you know how it goes!

I'm just sending you a Private Message to confirm some details so we can arrange an Openreach engineer visit.

I have asked one of TalkTalk's support to pick your thread up and investigate it for you.

They aim to respond within 48 hours (Monday - Friday), but if more urgent you can always try the Service Centre. The posts are responded to in time/date order, oldest first. Please try to avoid posting on here until TalkTalk have responded to you, otherwise, this will just put you further down the queue. 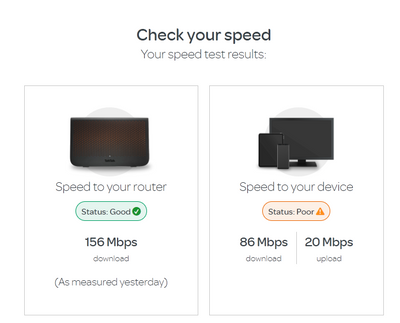 Connected directly to the ZTLink's LAN port how can it be any clearer? 🤦