I've tried the usual router reboots, the router is the only thing connected directly to the master socket (no extensions).

A bit of history on my issues...

I'm available all day this Friday if that's any good?

I'm really sorry about this.

The staff on this community won't be around until Monday now, so you may get faster support by using the live chat or calling customer services on 0345 172 0088 over the weekend, however the staff here should respond to this topic early next week to help if you still need them.

28th Sept, So an engineer Turned up as expected, he did some testing at our house, under various manhole covers over the road and at the green box, he concluded that there is indeed an issue with the line.

He said "his test equipment was showing a 65mb connection at the last manhole next to the Pole (10m away), but still 42mb in the house, he concluded that the issue must be at the junction box on the top of the pole (again... 4th time in 5 years) and that some of the wiring in the ducts was rather shabby."

However at this point he was running out of time and light, so said he would be back at 8am to finish the job.

29th Sept, at 8am i get a text directly from the openreach engineer saying he won't be attending as he's been assigned other jobs, but another engineer would attend later in the day..... No one showed up.

30th Sept, i get a text message from talktalk asking to call a number (03451720050) to arrange a new appointment, which i did, and arranged for the afternoon of the 1st October.

1st Oct, i waited at home again, but no one showed up again.

Can someone look into this as now i've wasted 2 afternoons for no shows.

Yes I accept the potential charges, and someone will be available most afternoons mon-fri.

OK if you can hear noise on the line and would like us to arrange an engineer visit to investigate can you confirm:

I've managed to borrow a handset from a neighbor, and there is a faint hiss and a popping noise on the line.

I'm sorry about this but generally if line tests aren't picking up a fault and the speed is above the guaranteed minimum then Openreach won't see this as a fault even if the speed has been higher in the past.

Over a very short period of time (week or 2 at the most) the speed has dropped to 43mbps down and 12mb up, (in the 5+ years i've been with talktalk on this same line i've never seen less than 20mb UP speed).

I don't care what the minimum guaranteed throughput is (especially as talktalk used to say the minimum was 51mbps for my line) the fact is something has happened to the line!

-Openreach have been working in the very same Ducts & Manholes that i Know my connection is routed through,

-There is a corroded junction box at the top of the pole my house is connected to which dispite it being raised twice has not been replaced (recommendation of 2 openreach engineers).

-I have disconnected the router for around 30 minutes right at the start of this issue.

I'm not sure how many more circles we need to go in before it's accepted that something has happened?

Thanks for answering the security questions

The sync speed on the 11th and 12th was 48.9Mbps, I can't see any further back than that. Current sync speed is 43.8Mbps. Minimum guaranteed throughput speed is 36.7Mbps

I've done as requested in the Message.

But ultimately the exercise of checking the estimated speed is pointless as last week I was sync'ed at 54/20 (as I have been for months and there was a sudden unexplained drop to 43/12. Clearly something has happened.

I'm just sending you a Private Message so I can confirm the predicted speed range for your line.

I'm not sure I agree with it being in spec for my line... 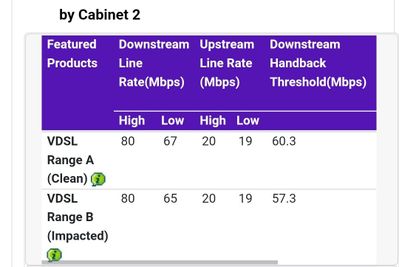 especially considering until a week ago I was getting consistent 54mb/s+ and I've never seen my upload anything less than 20mb/s in the 5+ years ive been with talktalk on this line.

Also clearly the router isn't the problem as a different unit actually made the line worse and it has only got slightly worse since leaving it for the DLM to make adjustments.

Also combined with the fact that I mentioned that openreach have been working in the underground manholes, ducts and cabinet I know I'm connected through/to would suggest something has happened to the line.

Also the corroded junction box on top of the pole that was supposed to be changed by openreach 4 years ago, and then again 2 years ago, but has never been done and talktalk don't care about despite the fact 2 openreach engineers have told me it needs replacing.

I've checked the connection stats this morning and the sync speed has remained at 43.8mb but this does appear to be within the range for your line.

Please can you keep the router powered up and I will check the connection stats again on Monday for any changes.

Great thank you. I will check the connection stats again tomorrow and I will post back on this thread.

Yep, still in the test socket.

Ok, I was checking that this router was connected at the moment. Is it at the test socket?

The replacement TalkTalk WiFi Hub You Sent me to try a couple of days ago?