Moved out of my old place, where the TalkTalk account was in someone elses name, the router model was a SAGECOM FAST 5364, and was called the "TalkTalk WiFi-Hub."

Moved into a new place, and they have sent me a DG8041W. Whilst it seems similar, using IPSec VPN is very problematic, which I need for remote work as I'm in consulting, and at the moment we are working from home. I have even tried putting the device into the DMZ, and all kinds of port forwarding and firewall services rules, it just wont work. Switching Wi-Fi network e.g. at family, it just works fine.

I know the issue is not TalkTalk, it worked fine on the Sagecom device, in the default configuration. I also have a background in rolling out networking for large scale businesses, so I can enable a port, if required, although typically this is not required (ie I have used this VPN in client site offices, guest wifi, hotel wifi, home wifi, tethered to a mobile phone etc, and it has always "just worked").

I am also noticing websites are not loading correctly, there will be missing images / pictures, that are just in blank boxes, even when connected via ethernet.

Another odd thing, websites, at the end of the .html keep having an extra # and there is then random info there, when I load the same site on another connection, this isn't there.

Finally, devices connect to the hub, e.g. my iPhone, and will say "no internet connection" until the phone requests I use data instead. After a few minutes, the device gets an IPv4 IP over DHCP and then the internet works, the delay is infuriating.

Overall, I am having such a hard time with this router. Is it possible to get the older model somehow? The Sagecom 5364?

I've included a Help Guide below,

About the Wi-Fi Extender Kit

All working well for now, the only minor issue is the WiFi. To reach the back bedroom, garden and extension (utility and bathroom) sky had to install a booster which lets the tv work. Here I don’t get any WiFi. Do Talltalk offer any sort of booster or is this something I would have to get myself? I have an old wireless N booster but it seems to make everything very slow.

Can you disable this thing that automatically devices the “best” WiFi channel. It’s choosing c36 and only 40MHz.

I have SkyQ which is fixed to c36 and 80Mhz there’s a main box, 2 minis and a booster so 4 simultaneous broadcasts on 5GHz (all boxes become part of the SkyQ mesh) on c36.

Please let us know how you get on.

Awesome this works really well now, the other huawei model struggled unless I set a manual DNS. Will try it for the day and get the rest returned ASAP.

The router firmware has now been updated.

I've just contacted our Products Team and asked them to update the router you currently have connected.

I will post back to confirm once this has been completed.

Not sure if they want to patch the new sagecomm it’s on the same FW as the old one? Just got it connected and seems to be good, for now.

Ok, please let us know how you get on.

Still no WiFi network being displayed, it’s odd if I turn it off for a few hours it will display the SSID. Then it disappears after several hours of usage.

new hub arrived, will try that.

The firmware has now successfully updated.

Are you now able to connect?

Thank you. I've just escalated this back over to them now.

Done just now although the WiFi has not come back on, it’s white though. Yodel shows delivery today, so most likely that will sort it out. Not got anything connected via Ethernet right now.

Could you do a quick reboot of the router? I will then ask our Products Team to try and connect again.

No, the sagecomm is on and the light is white, but there is no WiFi displaying again.

the heater isn’t plugged in 🙂 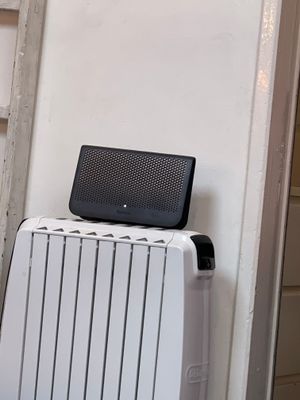 Have you re connected the Huawei hub?

The firmware didn't update overnight. I'm really sorry about this.

Our Products Team are going to manually push through the update this morning. I will post back once this has been done.

please let us know tomorrow how you get on 🙂