It's back - the problem that never gets fixed "unrecognised password"

It's back - the problem that never gets fixed "unrecognised password" 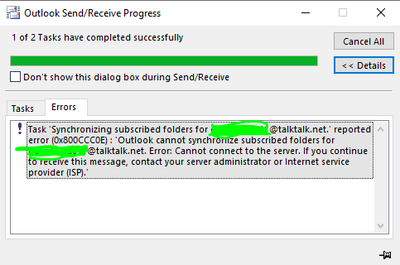 Re: It's back - the problem that never gets fixed "unrecognised password"

Hi georgeh2011, I've not seen lots of posts with other members reporting this this week. It's really not uncommon for Outlook to have minor temporary hiccups though. In fact helped my friend with her Outlook the other day when her blueyonder account was playing up. I got her to log in to webmail it worked fine got her to remove the account from Outlook restart Outlook readd th account to Outlook and restart again and lo and behold it worked. It's single most common fix I've seen of " EMAIL issues" in my 30 years in the IT industry. There are times when we do have issues with the servers, but we see customers reporting the same issue en masse when that happens.

Re: It's back - the problem that never gets fixed "unrecognised password"

If I experienced it on a single machines at a time, I might agree with you. However, when it occurs it usually affects every machine I have my TalkTalk account configured on - at the same time. This includes my Android phone.

When it happens it can last for hours. And it often affects a friend who is also on TalkTalk, again often at the same time.

That says to me TalkTalk have an authentication issue. It may not affect lots of users at the same time - sometimes it does - but that doesn't mean it is suddenly lots of independent users all experiencing an Outlook problem a the same time. The common factor is always TalkTalk. Again this points to TalkTalk.

The other thing is re-entering the password almost never works. Removing then re-adding my account involves a very long re-sync time with IMAP so is utterly impractical. It also rarely works. The "solution" that works most reliably - if very annoying - is waiting. Then the problem goes away, again on ALL my machines at the same time. That doesn't sound like an Outlook issue to me.

It is a real pain when it is a sufficiently "hard" error (i.e is present when it next tries to sync) to affect Outlook for Android. That has a major flaw in it which makes this problem almost impossible to recover from except by deleting the account from Outlook, waiting a while and adding it back in. Sometimes it an be over a day before it works again. That doesn't seem like a "transient Outlook error" to me, although it does highlight this real issue in Outlook for Android where it appears corrupt something in the account data when it hits an authentication issue with TalkTalk IMAP.