I am receiving multiple copies of emails. How can I stop these please

Every time I log on to emails I receive about 1000 messages, all copies of existing and delted emails.  I now have well over 30000 emails.

jbuchanangb
Philosopher
In response to Varushka

You have reopened a very old thead but never mind.

Using Live Mail, please confirm that you are accessing the e-mail using the POP method.

With this method each item can be left on the server (marked as read) or not, dependjing on a setting in Live Mail.

Only when a complete mail session ends do all the messages which have been downloaded get markes as "read". If the session terminates incorrectly, they will be left "unread" on the server, so next time you connect here they all come again.

It is possible that among all the messages there is something corrupt which causes the session to terminate incorrectly.

As long as that one is still on the server, you are stuck with the problem. 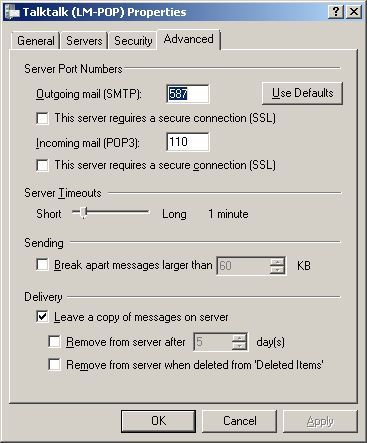 You could try changing the setting "Leave a copy of messages on the server" so that it doesn't leave a copy. This might fix it on the next time you get all those messages, by deleting them all from the server.

If this doesn't fix it it might be necessary to resort to accessing the mailbox using Telnet.

This has been happening to me for the last four days. I keep deleting the duplicates and they keep returning, I have emptied my junk mail and deleted mail numerous times only to have all the emails sent to me AGAIN and AGAIN. How can I stop this happening. I use Windows Live Mail

I use Thunderbird and have the same problem, also happens on my mobile. so clearly a Talktalk issue. Stops when I move the email from my webmail inbox otherwise keeps on happening

This is happening to me as well, afraid to open email as every time I do it downloads 750 previously binned emails.

jbuchanangb
Philosopher
In response to Vivien11

I only know how to delete them 50 at a time. With the old AOL based e-mail you could delete the entire contents of the Inbox if you wanted to.

Maybe someone else here will have a better idea.

Anyway FWIW, to delete 50 at a time, use Settings-Mail to change the number of messages shown on the inbox screen to 50.

Then when looking at any page ful of 50 messages, tick the box in the blue bar above the massages, an this will cause all the boxes below it be ticked, then click Delete in the heading bar.

I am using Webmail

Welcome to the forums. There are skilled volunteers here to help you. I have been working with e-mail since it was invented.

What method are you using to access your e-mail? Are you using web mail or an e-mail program, such as Outlook or Thunderbird?

Based on your reply I will help you solve this problem.

I joined in the discussion earlier.

At the time my IPad had downloaded over 3000 old emails THREE times.

Since then, my IPad yesterday downloaded over 3000 emails..FIVE Times.

My desktop is currently multiplicating many THOUSANDS of emails.

I have turned off the Windows Live Mail Service, and my IPad.

Last night I spoke for 26 minutes to my LOCAL Customer Service Adviser based in MANILLA!

She advised that they were receiving thousands of similar complaints.

She told me to send examples of the duplicated emails to :- abuse.ttb@talktalkplc.com, so that they can investigate the complaint! IWhat good will that do? I would love to send them 30,000+ emails to block their system and stop them working!!!! Apple won't allow block deletion of emails, and Windows Live Mail freezes when I try to delete large quantities. I have wasted hundreds of hours deleting emails, which keep returning.

In addition to the unwanted email downloads, lots of current emails are only headers with no content. I have also been blocked from a site to which I have subscribed for years. I am unable to contact them by any means without receiving a message that starts with ' SERVER ERROR 403-Forbidden:Access is denied you do not have permission to view this directory using the credentials you supplied'.

I am still receiving emails from Baba-mail, but I can't open them.

Who is going to pay for my time and for the six months of ridiculously slow SUPER FIBRE Broadband service that I suffered until they eventually listened, and replaced a faulty fibre to copper conversion card in a roadside box just round the corner from my house?

I am a VERY unhappy TalkTalk customer.