I'm having the exactly the same problem using Outlook 2013. Worked until sometime yesterday but not at all since. Tried repairing my Outlook account settings incase they were corrupted but couldn't connect to Lineone server.

The Lineone Mail settings are:

Let us know if you're back in action.

Can someone confirm the settings for Gmail using pop3.

Not sure mail.talktalk.net will work as it's a lineone.net account.

Is there still an outage?  I cannot receive mail using Gmail.  It receives other, non talktalk accounts using pop3 so it sounds like a fault at Talktalk.

Hi Gondola I cannot find how to change the account type to IMAP (it's set to POP3 and greyed out so cannot be changed). I've tried changing the other settings as appropriate but no luck. Outlook could not log into server when testing new settings.
0 Likes
Report Inappropriate Content Reply

These are my settings, not changed in years.

What should i alter?

Mail is sent through: smtp.tiscali.co.uk

I've just tried setting up a new Outlook 2013 account manually using the settings you suggest but when it came to testing the settings it was unable log onto the server. Outlook 2013 is also able to 'repair' accounts but that process is also frustrated by not being able to find the server but works perfectly on my Tiscali.co.uk account which is a POP3 account. There must be something at the Talktalk end that has changed or is not working that is not being admitted to? This on top of the price hike on my so called fixed price contract is making me seriously consider moving elsewhere.
0 Likes
Report Inappropriate Content Reply

Everything else should be as the table shows. All mailboxes managed by TalkTalk Consumer are operating on the TalkTalk Mail platform and will be able to use secure mail and the TalkTalk.net mail servers.

If still having trouble then screenshot the outgoing server and advanced tabs, image edit to obscure the first part of the email address and upload here so I can see what you see.

I too had problems with my wife's lineone pop3 email account, with incoming emails stopping roughly 24 hours ago. Outgoing emails remain operational.

My successful solution was to change the incoming email server setting from lineone to pop.tiscali.co.uk using port 995 and SSL set to Yes.

For outgoing emails I had no success with either TalkTalk or Tiscali smtp servers so reverted back to my original lineone smtp setup.

If TalkTalk are going to require us to migrate old lineone email accounts over to TalkTalk or Tiscali servers we will need a reliable tested solution and plenty of notice. The setups being discussed today are TOTALLY different from previous advise provided by TalkTalk.

Thank you Phil Reeves that seems to have worked for me also.
The question remains: Why doesn't TalkTalk know that that this is the solution to a fault on the Lineone server and save us all the heartache and time I've spent on this today? Thanks TalkTalk.
1 Like
Report Inappropriate Content Reply

The settings for lineone email have previously been to use the tiscali servers. i.e.

The TalkTalk.net servers are the exact same servers as you'll see when you ping the incoming mail servers

You'll get exactly the same result whether it's tiscali.co.uk or talktalk.net

Look at the TalkTalk advice for Email settings - IMAP & POP3 and you'll see it's the same advice I'm giving. There is no different advice for lineone users.

So, you were both on legacy settings and are now on the previously recommended tiscali incoming server settings.  The outgoing smtp.lineone.net server name resolves to the smtp.tiscali.co.uk server. So, again it's exactly the same tiscali outgoing server.

The outgoing talktalk.net server is a different server but is specified as a permitted server for tiscali mail and can be used.

I can only deduce that when you changed the settings to talktalk.net servers that you didn't accept the new security certificate that's needed for secure connection security.

I have the same problem using Outlook Express with Windows XP.  I need to keep my lineone.net address for a few contacts, and have to pay TalkTalk £50 pa for the privilege!  It stopped letting me send emails from that address several months ago, and now won't even receive them!

Yes i agree entirely. I am currently in a dispute over their breach of contract for raising the price within one month of my sign up for an 18 month fixed price contract.

As for lineone mail, I am slowly weaning myself off it and emailing all my lineone contacts with my new email. Then it very likely to say goodbye to lineone AND Talktalk.

Currently I can send lineone emails (via gmail) but cannot receive.  As I mentioned I changed nothing, and yet Talktalk insist neither have they. I know who I believe.

Outlook Express (OE) and Windows XP are not supported products as they're way out of date and cannot provide you with the security you deserve.

Like the other users recently saying they're not receiving mail I'd expect that OE is still using legacy out of date settings.

If you have got a newer device other than a Windows XP computer then sign in to your lineone mailbox using an up to date browser like Chrome, Edge or Firefox.

You should be able to receive and send lineone mail messages.

You can also sign in to your mailbox using a mobile device browser or use the email app on the phone or tablet.

Good old Talktalk - that does not work!

This weird page appears - Not found - continue button does not work either! 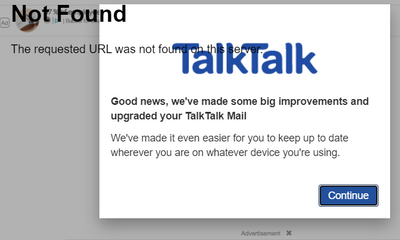 Is this the first time you've signed in to TalkTalk Mail via webmail? i.e. via a browser.

What device are you using and what's the operating system and browser?

Bizarrely the link works in Edge (which I hate). However once I have accessed the inbox, in Edge, Copied and paste the URL into Chrome and that works!

The Continue button should take you on a one-off tour of TalkTalk Mail.  I don't know why your Chrome browser would be blocking the URL so what I'd suggest is to disable all browser extensions because one of them, perhaps a Tracker blocker, Ad blocker or Internet security extension is not allowing you to proceed.

Edge is now based on the Chrome engine. But clearly doesn't have the same extensions loaded so was able to proceed.