That's it, really. Add screaming.net to the list of broken domains - and although Gondola reckons sending smtp should be OK, I'm afraid it isn't.

Update: It doesn't work in webmail either.

Hi NickS_2, thanks for taking the time to post and let us know its working normally again.

Thanks for confirming. The TalkTalk Mail platform is clearly picking up the DNS record as normal this morning.

All working this morning. 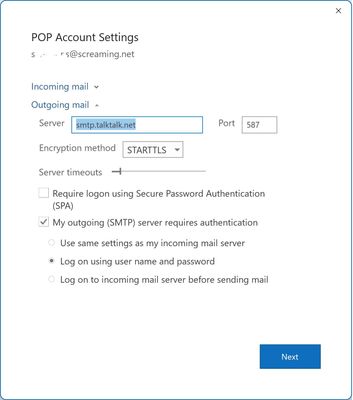 I can see that one of the tiscali DNS name servers is now responding.  Is your mail now back in action?

Yes, webmail will not work because that will go via the DNS to find the smtp.tiscali.co.uk servers and as the DNS is not responding the sending will bring up a TT420 error indicating the sending mail servers cannot be found.  In my opinion the TalkTalk Mail platform ought to be sending via the smtp.talktalk.net mail servers as a default.  But that's not been configured.

There's no issue with a mail client sending via the smtp.talktalk.net servers. Mail will be sent.

What happens when the mail is received by a mail service is entirely dependent on how the recipient authenticates the incoming mail, or not. So, that mail could be received ok and arrive in the Inbox, received but flagged as potential spam, bounced back.

I was using the talktalk host, have been since the last time we had a mail issue. Can't even use webmail as a backup this time.

See my Current issues post top of this email forum. I've already included screaming.net and a comment about sending mail via the smtp.talktalk.net host name.