I just wanted to put this on record.

At the end of March the fibre broadband download speed that we had been receiving for several years suddenly decreased by 25% from 32 Mbps to 24 Mbps. The SamKnows analytics chart reproduced below shows this clearly.

I complained about this and, eventually, was put in the hands of someone from the CEO office. I was told that they didn't know why this had happened. When I asked for the speed to be restored to 32Mbps the TalkTalk Technical Team told my interlocutor that this couldn't be done because this highest download speed that my line can support is 24.6 Mbps.

I showed them a chart like to one below and not only could they not explain it, they had never even heard of SamKnows (https://samknows.com/).

Like I said, I just wanted to put this on record.

Hi @BrogdenFields that's not nice! Your post has been flagged for assistance and you should hear during the day. I'm sure one of the excellent OCE team will be able to make sense of this, and they all know and revere Sam knows!

I don't work here and all my opinions are my own.
4 Likes
Report Inappropriate Content Reply

Thanks for your message, it's nice to at least get some sympathy 🙂.

I doubt that the OCE team will be able to help. I had several fruitless discussions with the online support team before raising a formal complaint. I then had several telephone conversations with the person from the TalkTalk CEO Office who handled my complaint, and put them under considerable pressure, which I didn't like to do but was getting nowhere (frustrating).

I have the final letter from the CEO Office in front of me and I will quote two passages from it:

"Sam Knows is not an accepted device by Talk Talk as we do have our own systems to check these speeds."

"I did investigate this with the Technical Team, who did investigate your speeds via Open reach and they informed us that you are gaining the permissible speeds on your line and that you will not reach 32mbps these speeds are; Highest Download Speed is 24.6 Mbps ..."

I thought that it was as plain as day that the SamKnows data showed that my speed had been 32 Mbps and suddenly dropped to 24 Mbps, but it seems that the real explanation was that the speed I had been experiencing was impossible. Perhaps my router read this somewhere and decided to stop doing things that were impossible and behave like a good normal router.

I should mention that before the incident I was had been using a Billion BiPAC 8800NL which I purchased several years ago to replace a flaky TT Super Router (discussed on this forum at length as far as I recall). The BiPAC performed flawlessly but as part of the initial discussions with TT online support I was persuaded to pay £30 to get the newest TT router, which works OK but is no better than the BiPac, and it didn't restore the speed to 32 Mbps. Perhaps it's a router conspiracy?

Is this complaint with the CEO's office now closed? Would you like us to take a look?

It's closed as far as the CEO office is concerned. I only raised it here because I found the letter and thought that others might be interested. But thanks for your offer.

This is getting worse. To re-cap; last year my download speed dropped from 32 Mbps to 24 Mbps as shown in the chart below. When I complained about this I was persuaded to replace the Billion BiPAC 8800NL that I had been using with a new TalkTalk WiFi Hub Sagemcom-FAST5364 (at a cost of £30). This didn't improve matters, but I was told by the TT CEO Office that the previous speed I had been getting was "impossible" so I had nowhere to go. Since it didn't seem to make much difference I carried on using the TalkTalk WiFi Hub, shown in the chart as "Old" TalkTalk WiFi Hub.

Over Christmas I started getting intermittent loss of broadband internet connection, so I reinstalled the BiPAC. And the speed increased as shown in the chart below. But I was still getting problems with intermittent loss of broadband internet connection so I complained. This time I was sent a "New" TalkTalk WiFi Hub FOC. But this is worse than the last one and struggles to get 20 Mbps. It has since updated itself to firmware version SG4K10002808t, which I think is the latest, but the download speed is still struggling to get over 20 Mbps.

I am not sure what to do; I will probably try reinstalling the BiPAC. 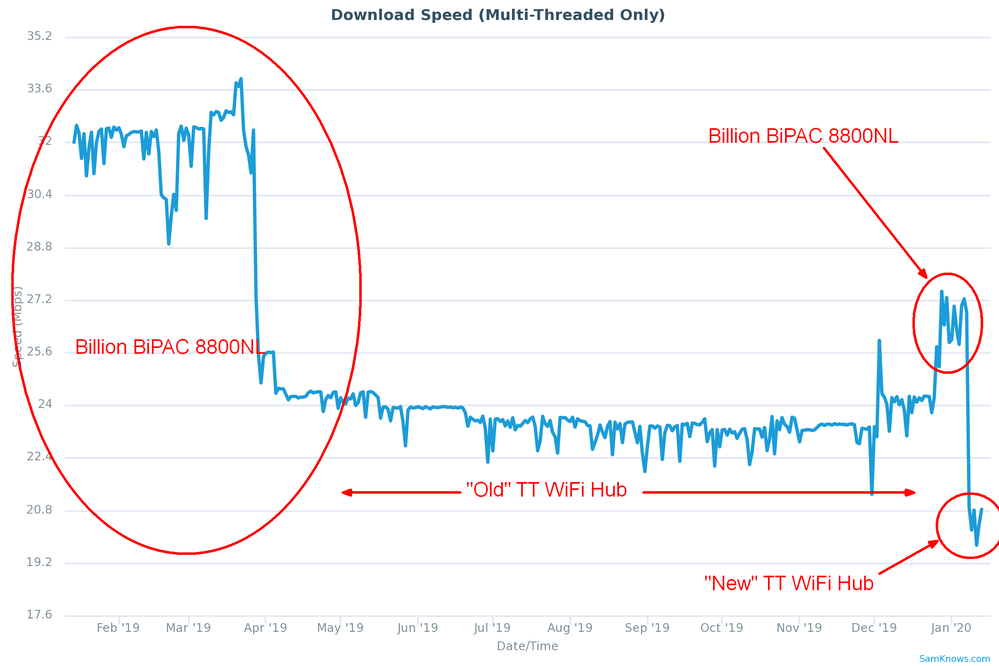 There were a high number of re connections showing on the line around 16/01 till 18/01. The connection appears to have remained stable since then. When did you last experience a drop in connection?

Thanks for getting back to me. Its difficult to answer your question because the problem seems to be fleeting - the connection drops and then re-establishes itself. For example, the WiFi Hub says : Connection up-time Connected since 4d 21h35m43s, but the log says :

It's full of these, I have only reproduced a few. I don't know what the messages mean, I'm sure you do, but the connection just "feels" very poor. It makes watch TV catch up impossible, which is frustrating.

The speed might have improved a bit as the new router has settled in; it says Current speed Download 23.0 Mbps, although when I run a speedtest it doesn't get to 21 Mbps.

The connection also looks stable for 4 days from here too. In regards to TV catch up, is this using the TV box or a smart TV? Is this the only device experiencing an issue at the moment?

Thanks for getting back to me. It's a smart TV.

If the connection is stable, why does the WiFi Hub log show error messages "DNS name resolution failure" every few seconds? That doesn't seem right to me.

I don't keep an eye on it all the time, but no, the light always looks steady white when I do look at it.

OK thanks. Do you experience the problem on devices connected to your router by Ethernet cable?

My PC and the smart TV are connected to the router by Ethernet cable.

I'm currently looking into this and I will post back as soon as I know more.

Would it be possible to retest when next convenient and let us know if you're still seeing these DNS errors and experiencing performances issues as we believe that this issue may be resolved now.

In the log this morning between 09:51:20 and 09:55:14 (i.e. a period of just under 4 minutes immediately before this message) there are 17 "DNS name resolution failure" error messages.

Ok thanks for re-checking. I'll speak to our Products Team and will let you know.