Could somebody please advise what my best course of action is.

I am getting real slow internet at intermittent times. (2-8mbps)

When I check my connections on https://www.talktalk.co.uk/help/servicestatus/devices

it shows that 10 of my devices are having issues connecting to the internet.

More interestingly it gives me a list of devices that are "Active devices working as expected".

On here are all my neighbours devices aswel. I have spoken to him and changed my password but I am convinced that he is not on my network. Also if I login directly to the router his devices are not there.

When my internet goes slow my devices start asking which Sky router I have to help on troubleshooting. Also when the internet is slow I go to speedtest.net and the provider has changed from talktalk to Sky.

While also speaking to my neighbour he has had slow broadband so had Sky to increase his speed to aid with this. Has something gone wrong at the box?

I have called customer service but they were poor. I tried to explain the problem and got nowhere.

I'm sorry for the delay. I've run a test on the line which hasn't detected a fault and the sync speed looks consistent. Can I just confirm, are the speeds also low if you connect wired?

Yes hardwired is affected when the internet slows down. Right now both Xbox's will not connect at all.

I have attached some screenshots. What I do not understand is why on "Active devices working as expected" I have my neighbours devices. Maia and Wayne live next door. On my router directy these devices do not show so where is the talktalk site gathering this information?

More importantly my devices all show as needing attention. 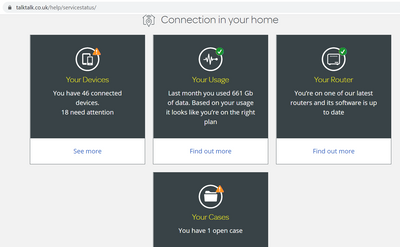 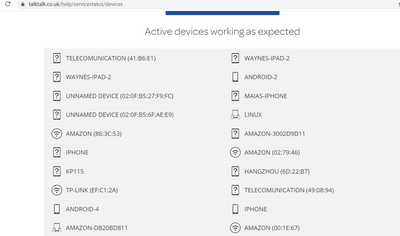 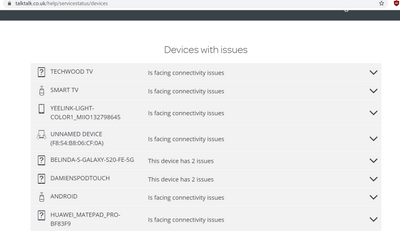 Also here is an image of what is happening now. It is sending me to a Sky connection diagnosis page. I am not on Sky but my neighbour is. Problem is intermittent and disappears at times. Speedtest also now shows Sky on speedtest.net and is not talktalk. 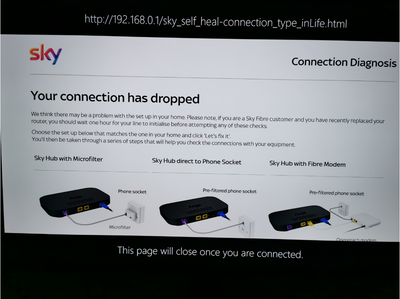 And here is what the phones are now displaying. Note the Sign in to Talktalk at the top and Sky connection Diagnosis.

I'm sorry for the delay. Can I just confirm, are the devices still listed after changing the wireless password and also factory resetting the router? Which router are you currently using? (make and model) Have you ever tested with a different router?

Hi. The devices stay after resetting the router, password and even changing to a different router all together. Internet was fine yesterday and is now back to slow speed test and the sky issue again.

The devices nextdoor never show in the router itself but always on the talktalk support page. Where is it getting this from?

Also when my speed test goes slow suggests I am with Sky all of my homeplugs go down aswel.

Could somebody please advise. This is a serious intermittent problem now.

Can I just ask, what model of router you are using ?  Is this a TalkTalk router or your own router from a previous provider etc.  Reason I ask, in your earlier images (Post 4 above), at the top of the image, the address is 192.168.0.1/Sky_self_heal......

This is not an internet web page but a stored page within the router itself.  Our routers also have a similar help page if there is a connection issue.

Hi I am using a talktalk WiFi router. That is what's confusing me. Plus the fact I've got all my neighbours devices apparently on my line.

If you look in the earlier post it's the talktalk support page that's mention these devices but connecting directly to the router does not show these.

OK, can you find out if your neighbour is also using any type of powerline adapters ?

You cannot connect to your neighbours router over wifi, unless you know the password and have been connected before, or you connected a cable directly into his router.

If he is using powerline adapters and you are using powerline adapters, it could ne that there is some bridge somewhere in the electrical system passing the connection from your adapters over to his adapters, and thus onto his router. - This could explain why your neighbours devices show in service centre as they could have been at times connecting via the powerlines to your router.

To test this out, you can unplug the adapters from their sockets for a while and just test with your devices through wifi / wired to your router.

Thanks for replying. I understand how networking works and is why I am at a loss.

To try and narrow the issues down I changed password and unplugged the homeplugs and all devices on the network.

I only left 2 devices connected. My laptop and my mobile phone. Issues still persisted.

Any more ideas I am willing to try but its getting annoying now. The homeplugs have been in for a couple of years. If I cannot use wireless or them at times I have not network at all.

You mention that you have changed your router password - has your neighbour been running a password protected network as well?

Has he changed his password - or if he does not have a password can he set one on his router?

When your network starts playing up, does his?  When you have an issue, do you immediately check with him rather than rely on memory?

The image of your phone screen may provide a clue -

In the top left of the screen you seem to have two network icons.  One bold with what looks like an exclamation mark alongside (possibly indicating that it has an issue) and the second faint with a question mark superimposed.

Googling suggests a potential common cause - your DNS settings.  Have you changed these at all - or again has your neighbour?

Can you confirm that the TalkTalk router details shown on this screen exactly match the TT router that you are currently using?  It won't explain the Sky diagnostics shown, but at least makes sure that you are connecting through your router and there is not a third router (in another home, say) which might muddy the waters even further.

Do you or your neighbour use any of your devices as a wifi hotspot or tether?

It is possible for a device to connect to two routers - though not usually at the same time.  How close is the router in your home and the one in your neighbours'?

I live in the middle of a terrace of three and each of us have wifi - depending where I am my iPhone connects (or tries to connect) to one of three routers and changes as I move upstairs and across my bedroom.

You have checked the connections in your router - and none of your neighbours devices show.  Has your neighbour carried out the same checks?

Have you looked at the Network & Internet settings on each machine - including your neighbours’?  The latter may be difficult of course.  Have you deleted all the network settings so that the devices can reconnect afresh?  Again, ideally your neighbour should do this too so that you both start from the same point.

I would suggest that there is a conflict between your two routers and depending on changing conditions you are swapping from yours to his.

As well as changing passwords - you have changed your router and I presume that you have also changed all your devices or you would not connect at all - have you changed channels on your router?  If your two networks are close and trying to connect on the same channel your devices will get confused as the transmitted signal strength will vary depending on several factors such as weather conditions and what physical items are between the routers and their associated devices.

Just another final thought - you say 'neighbour'.  Are you and Wayne & Maia in two physically separate buildings or possibly in two flats in the same building?  Do they have powerline adapters? I'm thinking that your powerline adapters may be connected to the same physical wiring and the same phase.  Generally, with a three phase supply from the substation each house is connected to a different phase - the first to phase one, the second to phase two and the third to phase three.  House four would be back to phase one and so on but one building converted to two flats may share wiring.  Do any status lights on your adapters change when you have these problems?  If so, how?

That's quite enough to go on for the time being!!