@JAMSROO7 If you are having broadband speed issues please start your own topic.

Sorry for the delay, we'll let you know when we have any further information

I did some more test last night/ this morning to see if anything has changed. It hasn't, speeds still very bad at peak times and showing clear congestion on single threaded and multi threaded download speeds. I disabled WiFi on the router during the tests and also made sure only one ethernet was connected. I also used task manager to check that no other applications were using bandwidth.

17:15 (Single threaded download speed slower than multi but not too bad) 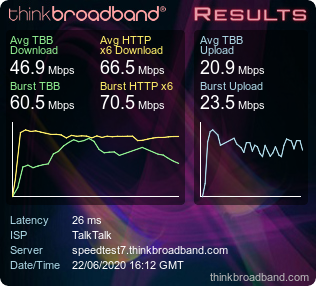 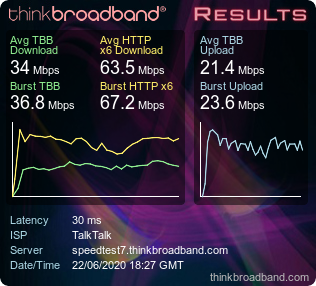 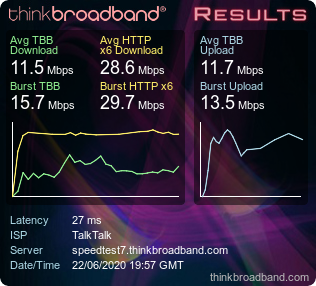 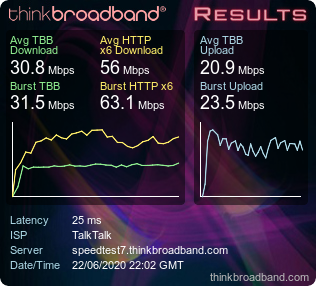 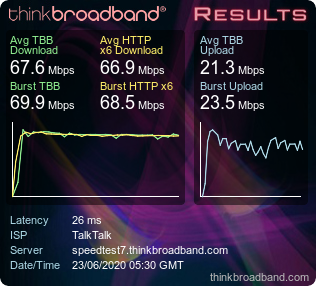 Thanks for the update. I'll try to find out if there's any update from the network team

I'm really sorry for the delay. I've escalated this further and I'm hoping to hear back today.

Any luck hearing anything OCE_Michellle ? Is there a point to this where I can leave my contract early? I saw a webpage somewhere with a TalkTalk promise that said if a fault is not corrected in 30 days, then I can leave penalty free.

It's getting really annoying now as I play Stadia that uses about 30-40mbit/s and at night I just can't use it.

I also tested last night and the issue is still there, major losses between 9-11pm but stil bad between 6-12
0 Likes
Report Inappropriate Content Reply
Highlighted

I also don't want an engineer visit because clearly from 12am to 6pm my connection is pretty damn good, nothing wrong there. It's purely from 6pm onwards and en engineer just wont be able to be here at that time or see the problem. The router also reports a good speed, but it's the actual throughput that is the problem and I'm guessing it's an issue somewhere in the network.

I'm really sorry for the delay. I've still not heard anymore so I've escalated this to a different team. It's possible that they may give you a call in regards to this. If they come back to me first then I'll post back straightaway.

Ok, could you give me more information about if I'm entitled to leave my contract early, penalty free, because this clearly has not been fixed in 30 days. We have been waiting 17 days just for a reponse from the network team and we didn't even get that. Thanks

I've been advised that this has been assigned to a member of our tech team so hopefully you will hear from them soon. If you did want to cancel then I'd recommend contacting our Loyalty Team directly to discuss this further.

Our Tech Team have come back to me now and advised that they have spoken with our Network Team and following their investigation they can't see anything on our side that would be causing the slow speeds and latency at peak times and have suggested a possible wifi congestion issue.

I've explained that this also happens wired so we have 3 options we can take. I can see that we have never tested with a different router so if you would like to try this I can send one out ASAP to test with. We can arrange an BTOR engineer visit to the property, however I can see from your last posts that you don't want an engineer visit, or I can raise a complaint and request that the complaints team call you to try and resolve this or advise you what options you have in terms of leaving?

The problem is an engineer would come between 9am - 4pm, see that there is no problem and it will be a wasted trip. If they want to send an engineer to check the cabinet connection and maybe switch DSLAM, then that is fine with me, but it's useless to have someone come into my property, when my connection tests come back clear and my non-peak time speeds are as fast as they can go.

I have given you guys days of hourly tests, clearly 100% showing peak time congestion on your network and you come back with saying you can't find any problem.

I know this is not your fault at all, but I just don't think your network team is looking into this thoroughly enough. The fact that they just came back and said it's probably WiFi congestion, shows that they didn't really look into the complaint very well, you told them the tests were ethernet. Is there a higher network team that would have more knowledge about these things? Maybe switching DSLAM at the cabinet would help for starters. In my personal opinion, this is just TalkTalk covering up congestion on their network from full cabinets.

Does the router box fit through the letterbox? If so, yes please send a replacement and I will give it a go.

My contract ends in September, so if it's still on-going I will just switch to BT then.

The replacement router is on its way, please allow 24-48hrs for this to arrive.

Please let us know how the connection compares with this router.

Just to add to OCE_Debbie's post, as the line test is clear we only have the option to book an engineer visit to the property, however as you've also advised they may not be able to replicate this as it happens after 6pm.

If there is no improvement with the replacement router then we can raise a tech complaint for you and arrange for someone to call you directly.

I just want to post a link to Plusnet's forum https://community.plus.net/t5/Fibre-Broadband/When-congestion-is-given-as-a-reason-for-speed-drops-h... this customer had congestion issues and the staff persisted with the network team even after they came back saying no problems. After a 7 page adventure, they finally changed to a new VLAN and the problem was gone.

I don't even know what there is to talk about on the phone, it always seems like TalkTalk will push the blame onto the customer. I've given you the proof of congestion on the network. Your network team clearly wont do anything about it, probably because I'm the only one on my street to complain about it. You should be pushing them to investigate this more.

I'm not putting any more effort into this now though. TalkTalk is using it's own backhaul and if they can't monitor it correctly I'm changing to BT in September, along with anyone else also having the same issue.
0 Likes
Report Inappropriate Content Reply
Highlighted

I've been speaking with one of Network Engineers yesterday afternoon and they think they have found a potential issue. They are looking at this and have told me they will come back to me with some more information as soon as possible.

I have the new router set up and turned on now. Will try to some speed tests today/tonight and see if there is any difference.

For reference, here is the DSL stats:

It's interesting to see that my noise margin is 3.9 and from what I heard lower noise margins create higher sync speeds if the line can handle it. But I do wonder if at peak times, maybe the DLM is not changing my noise margin up a little to create a more stable connection from the crosstalk, because during these problems my sync speed always stays the same. I also thought the target noise margin was 6db but maybe openreach have tried to lower it even more. Just a theory though.

I will check again later maybe and see if it changes when there is congestion.

I'm getting a bit fed up with this now, so decided to do a bit of investigation myself.

There doesnt seem to be much problem with latency, it's all simply the single threaded download speed, which for most households is the most important due to Netflix and streaming etc. However it does affect the max download speed in the middle of peak times and packet loss as shown below. 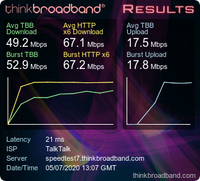 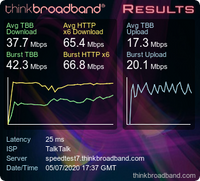 7:30PM (Single threaded same as last one, x6 speed is getting lower.) 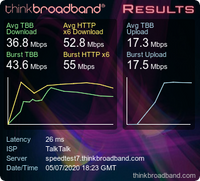 8:10PM (Both single threaded and x6 speed is now more than halved) 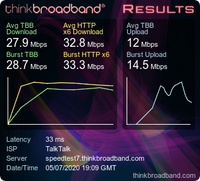 I checked my DSL stats at this time and the noise margin is still the same (3.9db). No change. Sync rate also no change.

I decided to restart the DSL connection and check the line stats again, interestingly the noise margin actually went down to (3.6db), everything else is the same. Did another speed test, but got the same result as the last one. Also still connected to the same gateway. ae50-ner001.loh.as13285.net [78.144.1.21]

Then I tried turning off the router for 30 minutes. To see if it would switch gateway, it didn't. Checked the router DSL stats again and once again everything is the same, except the noise margin (SNR), is now even lower (3db).

9:20PM (Speed results are now really really bad, could this be as simple as the SNR value?) 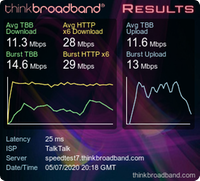 I used a program to perform multiple UDP ping tests and this was the result. Large packet loss. 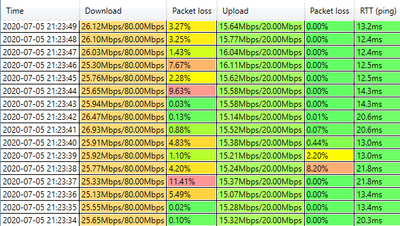 I then did a ping test:

I then did a tracert to find out where the packet loss is coming from:

Looked into it further using MTR software and this was the result. 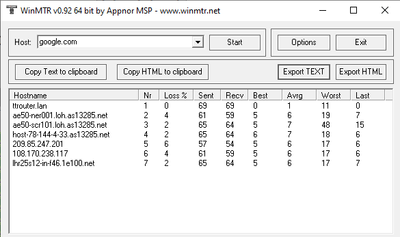 A few things I would personally want to check, if I were the mods/tech team. First try switching me to a different gateway or checking for issues on my current one ae50-ner001.loh.as13285.net. If that doesn't work, try upping my SNR margin profile to 6db or 9db, because it does seem odd that the SNR actually goes down at the same time the speed drops and the packet loss goes up, would of thought the DLM would increase it. The low SNR, although giving me a high sync rate, may be causing an unstable connection and packet loss due to crosstalk at peak times. I must currently be on the 3db profile. It could also explain why a single connection is less than the httpx6 multiple connections.

Can a mod please request for my SNR margin profile be set to 6db, or even 9db and at the same time switch me to a different gateway? We can then test it and either it will be fixed, or we ruled out two points, that would then leave only the exchange or the cab.

I would post another test at 12am to show the speeds as normal, but I need to sleep now, you can see from my previous posts that this is a constant pattern though. Maybe I will have time in the morning to do it.