Ive taken up the £2.50 fibre speed boost but I'm not getting anywhere near the promised speed.

Prior to this, I was getting 39-40 on the faster fibre plan, which based on our location from the cabinet, was pretty good. I was therefore hoping to see something similar with the boost, ie, towards the higher end of the promised speed range.. tests are coming back at around 49mbs so quite a lot less than I had hoped.

I have turned the router (I have the latest TalkTalk wifi hub) off for the recommended 30 mins twice, but don't want to do this too often as I believe it can cause DLM to play up and actually reduce the speed.

My question is.. Does it take time for the speeds to start improving? (given that my previous package was delivering near the top end of the scale via the same equipment)..

Your speed is mostly determined by the length of your copper line to the cabinet.

What speed range were you given when you upgraded ?

Thanks for your response Martin.

The suggested speed in the upgrade was 59-80.

You say “tests” are these wired, or wireless? What is the sync rate as shown on your router?

I too took up this offer and went live on the 9th May. I turned my router off over night and when I turned it back on ran a speed test and was getting 74mbps dl. However within 20 minutes this had dropped back down to 14-20 mbps where it has stayed ever since.

I've run a test on the line which hasn't detected a fault, however I can see a few re-connections. Just to confirm, are you rebooting/switching off the router?

I'm sorry to hear this. Please can you create your own thread and we can look into this further for you.

That's worrying, I had done the recommended turn off a couple of times after I was aware that the service was 'live' but definitely not done any more as I am aware that this in itself can cause a problem.

I haven't run a test since Saturday but each one I had tried, was only getting me a max of 49 to 50 mbs and I was expecting better.

What do you think the issue could be?

Please can you leave the router connected at the test socket for 48hrs without rebooting the router. We can then check the connection stats again to see if there are any further re connections showing on the line.

My phone is plugged into an older style BT socket. ie, it has a face plate with a single outlet which connects to the phone via a microfilter. I unscrewed the plate and this has a plug built into it at the back which then plugs into a socket which is integral to the connection box, if that makes sense?

I have taken the faceplat off and in doing so, my broadband connection was lost (until I plugged it back in).

Anyway, Ive run a couple more speed tests and its crept up slightly to 52mbs, still a lot lower than I had expected. My question at this stage however, are you able to check whether there have been any further disconnections (apart from the one I referred to here)?

Will the speed improve any further as the exchange manages the connection in the coming days? 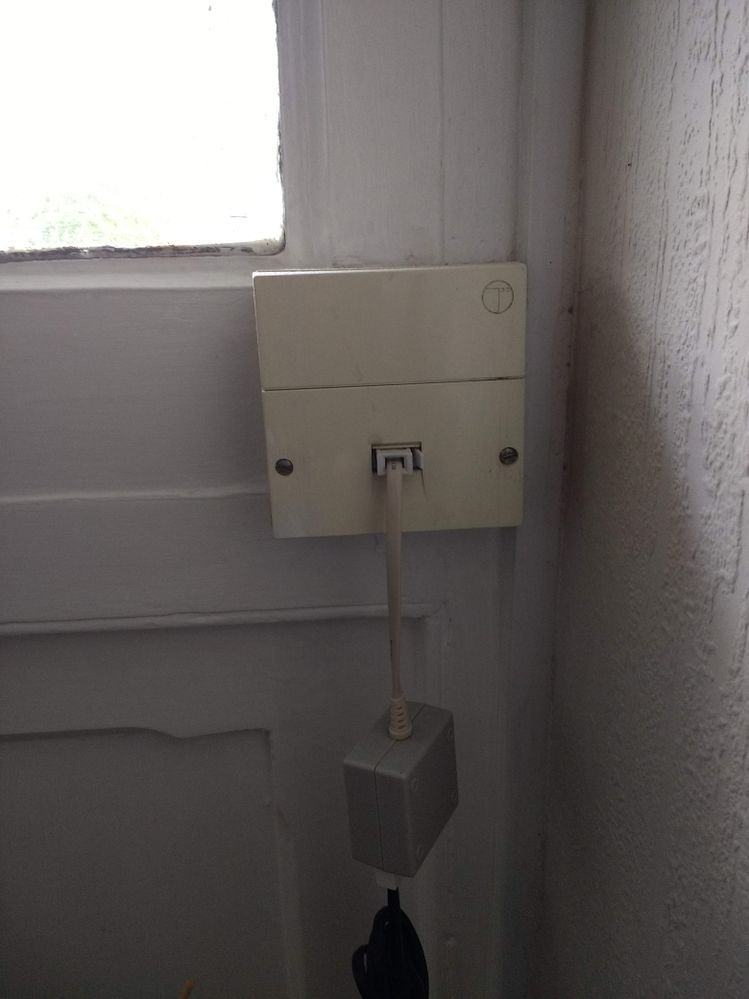 When you removed the faceplate the socket underneath that the faceplate plugged into is the test socket. Is this the only telephone socket in the house or do you have other extension sockets?

Yes, the faceplate connects into another socket via a male connector mounted on the back of the plate.

There are 2 extensions wired into the box behind the faceplate;

One goes to a sky box (I never have anything plugged in here but it works ok with a landline when I test it).

Another wire goes to a wall socket (into which I have a further microfilter plugged in) with the cable to the router attached.

I hooked up my laptop via the mastersocket this evening.

In the router dashboard, it give a connected download reading of 68.9mbps & upload of 20mbps

Still not as fast as I had hoped after adding the boost.

Hi Chris, yes, that's correct.. these were the 2 sets of readings in the 'dashboard' of the actual router, the tests (which I assume relate to the speed that would apply to streaming/downloading etc) were lower than these readings.

This really indicates that there is an issue with the extension wiring if the sync speed is so much lower.

When you connected the router to the test socket did you have anything else connected in addition to your router?

With the router connected to extension socket do you have any other devices connected to your telephone sockets?

I have ordered a faceplate splitter and will move my router to our hallway, near the main socket to do away with the extension. Will update once this is fitted. Thanks

0 Likes
Report Inappropriate Content Reply
This widget could not be displayed.