Hi, not posted on here in a while, but i'm getting fed up of my fibre connection getting disconnected practically every night for 2-3 times, i've noticed around in the evening onwards. I'm an avid gamer, which games on PS4 & Xbox, and my connection cuts out on important times while playing, which is really irritating now. Can you take a look at my line please before i go mad, its happening every day, and its never stable, or stays connected for a full day or so. most times when it disconnects, i got to wait up to 10 minutes for the white light on the router to fully sync.

I'm really thinking of changing soon, cause my 12 month contract was up month ago, and i'm paying enough as it is every month for this unstable connection. I hope it can be sorted asap cause ill be changing hopefully soon.

I'm sorry to hear this and I'll take a look now. I've run a few tests on the line which haven't detected a fault, however I can see quite a few re-connections on the line over the last couple of days.

Are you experiencing any issues with the voice service such as noise on the line or no dial tone?

Does your master socket have a test socket?

Have you ever tested with a different router?

Thanks getting bk so quick. those re-connections are whats making the line unstable, i never touch router much. No problems with the voice, seems fine, i can hear other people on the other end ok. These re connections only happen in the evening onwards. i was having similar problems back last year when i posted on here, it was disconnecting after 10pm onwards then. I had an engineer out, he looked at the cabinet, and changed the socket at front of the master socket to one of the new ones, those filtered plates at front.

Since then it looks like it sorted it, didn't hardly get disconnected, it was nice and stable, but looks to be bk doing the same again as before. Yes my master socket as test socket, that's what it was plugged into before the engineer come and changed the faceplate, the phone and internet lead as been plugged into the new filtered faceplate ever since, ive not touched nothing.

Yes ive tested with a few routers, one you sent be bk last year. Ive currently got the Wifi Hub connected.

Thanks for the information. Would you be able to connect the router to the test socket again and leave it there for a couple of days, just to see if it makes any difference to the disconnections

i can try, but how all of sudden its doing it again, its all been connected to the filtered plate ever since the engineer swapped it, it was fine for months and months nice and stable.

Have you recently added or moved any equipment on the line? If the connection is still dropping at the test socket (with 2 different routers) then the next step would be to arrange another engineer visit to investigate this further.

No nothing, haven't added or changed anything, its all the same equipment and leads etc. Right ill get it connected to the test socket later see if does make a change or not, i don't think it will, we will see, ill get bk see if makes difference. Ive got to find a filter now to connect it to test socket. 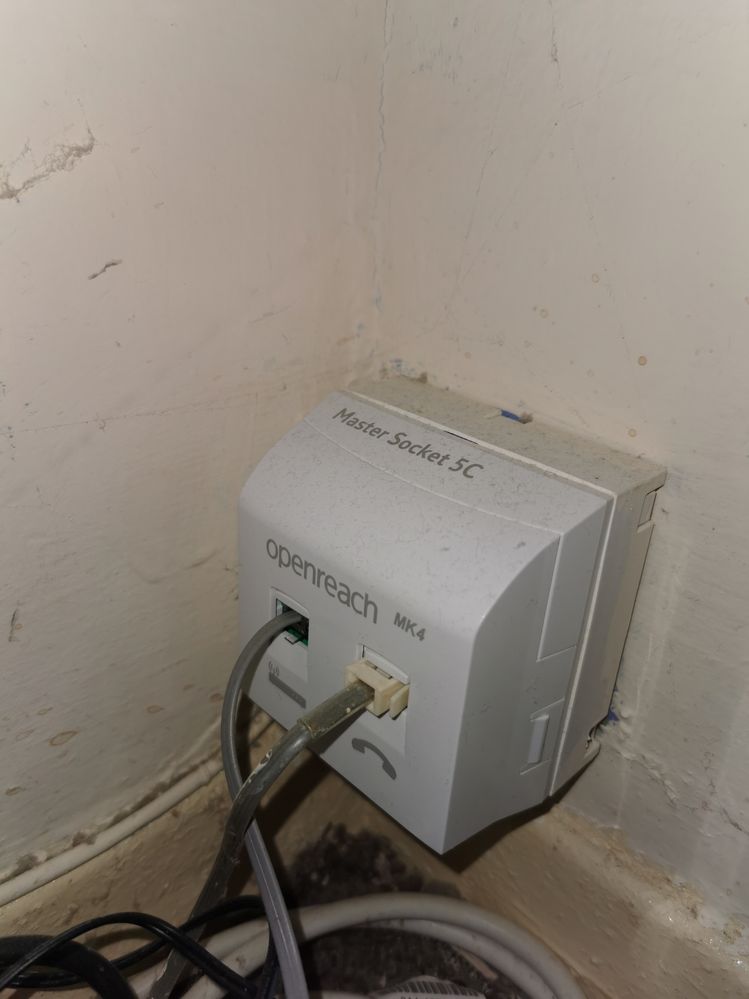 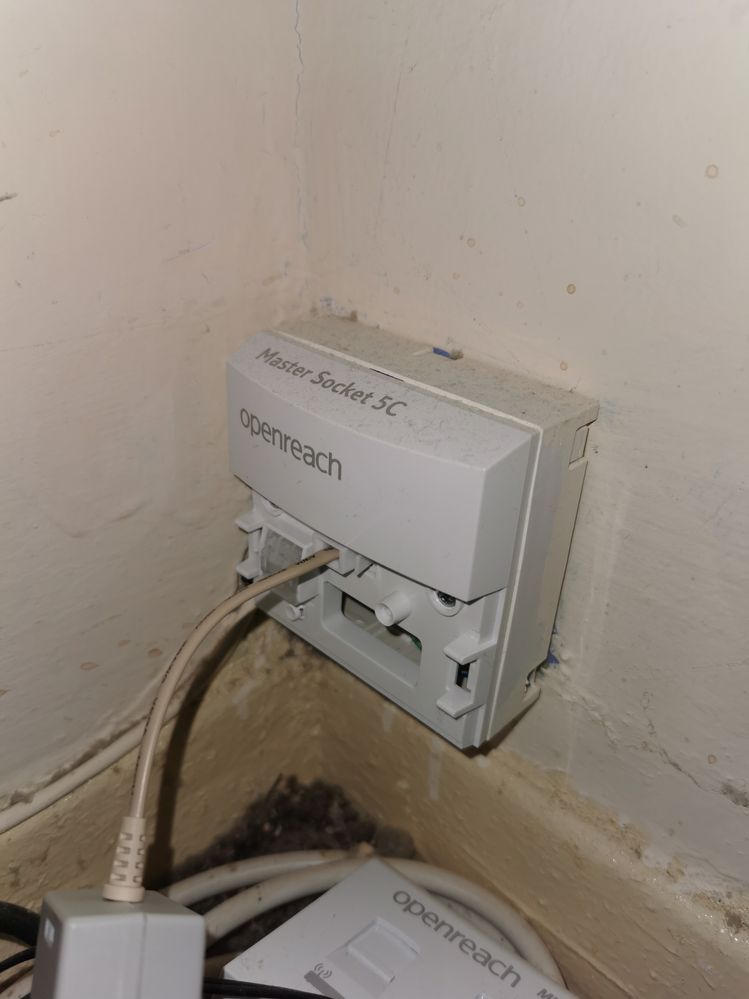 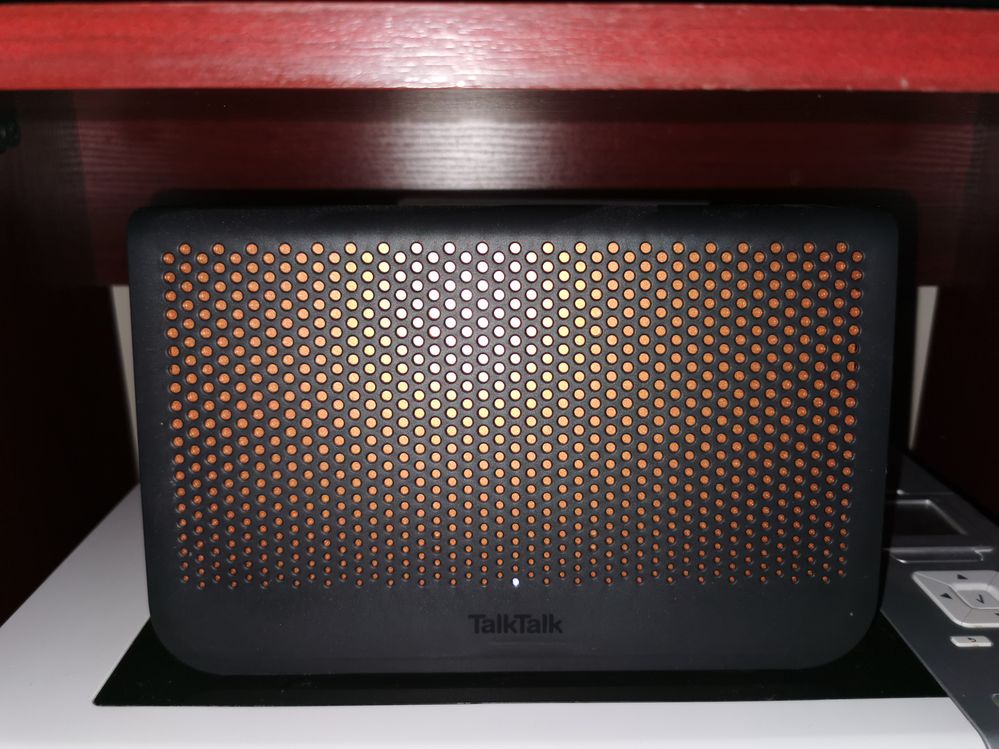 Thanks for trying this, I look forward to hearing how you get on 🙂

Right, since plugging it in to the test socket earlier around 11ish in morning, from around 5.30pm to 6pm, it as disconnected 3 times in the space of 30 minutes, so something's defiantly not right here. I can actually see the orange light on router flashing the dreaded orange. So since I've plugged it in to test socket, looks like it's gone worse. I'm sending this message on my 4G Mobile, cause the router disconnected 3rd time at the time I'm sending this.

Edit, it have yet again lost connection, so thats 4 times in the space of an hour, not right at all, even worse being in the test socket.

The line tests are not detecting any faults.

If you have tested with a different router, cable and filter at the test socket then the next step will be to arrange a Openreach engineer visit.

My relative across the road, she's also on TalkTalk, and she rang me she was also having problems, so could be area issue, but it was all good up until 5.30pm onwards, before having all these disconnections, its been up for 12 and a half hours right now, when i checked the router stats, like yesterday, its fine in day, then it goes pair shaped in the evening.

Not tested with different router for awhile, seems to be ok with it in morning, its just the evenings i have problems. ill monitor it over weekend, see how it goes from there, and get back.

How has the connection been over the weekend?

Sorry now getting bk, that week on the friday, i remember losing connection at around 5pm. But since then its pretty stable, its been up nearly a week now, no disconnects, but only thing is, i got a much lower sync speed, and actual speed since losing connection last time. DLM haven't kicked in since then and my connection as been stable for nearly 7 days, (a week). anyway of getting the sync connection up to what i usually get and what my line is cable of. 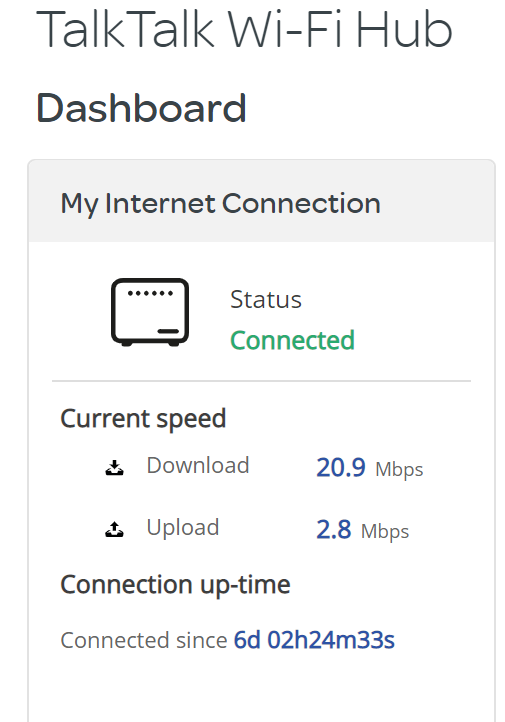 I've checked the connection stats and your line is in sync at 19.6mb. What speed were you receiving before you experienced this fault?

Thanks for confirming this. I've run a few more tests which are still clear and the connection does look stable. Do you still have a different router that you can test with so we can see how the sync speed compares?

Yes i still got a few spare routers to try, but shouldn't DLM adjust the line if its stable for around 48 hours or so. The router and this sync speed i currently got, is still currently stable, its been up nearly 11 days now without no disconnections as seen in the picture below. Cheers. 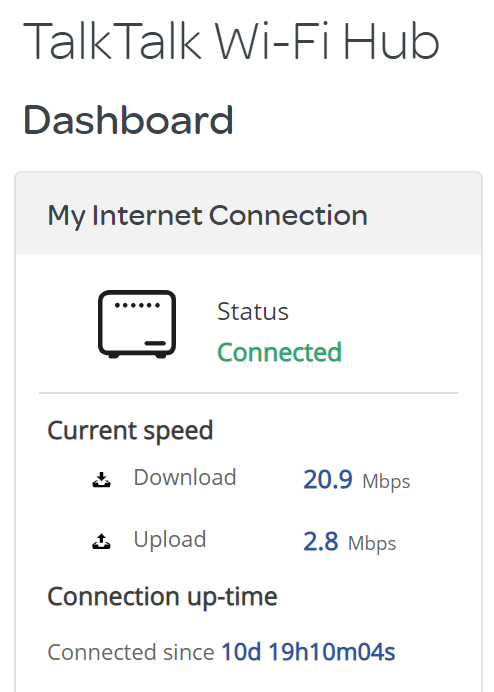 Please continue to monitor, and keep us updated.