Thanks for keeping us updated. Please let us know how the connection compares and if you do experience any further issues.

Hi folks.
A BT engineer went to the cabinet this morning and stated she had renewed all of the cables on my line. She stated she had increased the speed for me and put me on an 80/20 line. I found that a little strange because 'most' of the time I'm syncing at max speeds, its just dropping out frequently throughout the week. She also mentioned that we need to try another router and I informed her that we've already tried that.
She rang just after 8:10am and I was just leaving for work at this time & missed the calls. She also stated she would've entered the property to check out the cabling there but its my fault we didnt answer 😉
It's fair enough because it was also pointed out this wasn't technically a home visit so myself or talktalk wouldn't know to give us a head's up they want to come in!

So, I think its fair to say we'll see how it goes over the next 48 hours. if there's still drop-outs then BT recommended a home visit to check the internal cabling within the apartments and our property..

Sadly despite BT 'renewing' the cables for my line in the cabinet, it is still dropping out. It has dropped twice within an hour and I've attached the speeds / times. The speeds have also degraded.

At this stage I don't think there's anything else they can do from the outside and a home visit is probably required...

Can we request this with BT please? 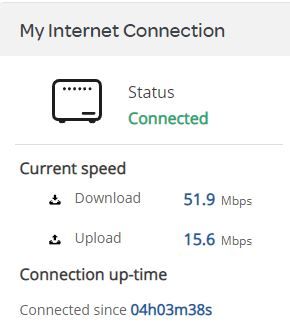 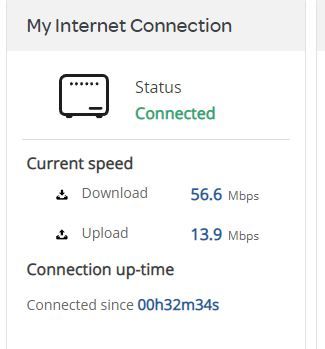 Thanks for the update. Does there appear to have been any improvement at all since the engineer visit?

I appreciate its been a short time  frame but its doing exactly what its being doing for a month. Inconsistent drop-outs and the speed is bouncing around all over the place, hence my suggestion for a home visit on the basis of my last post.

I've passed this on to our network team, if you don't hear anything later today can you bump the thread tomorrow and we'll check for updates

Our network team have logged this back out to Openreach for further investigation. If you don't hear anything beforehand can you bump the thread on Monday and we'll check for updates

Hi folks
The BT engineer showed up at 7:30am on friday... slightly frustrating because I was still getting some beauty sleep and again there was no notice of appointment.
alas, I wasn't too fussed because if it fixes the internet then thats fine by me... lol

Anyway, the BT engineer came in and replaced the master socket with the latest gen.
He ran several tests and showed me - it was reporting that the line quality was excellent and nothing was necessarily wrong.
he said the socket replacement has the potential to fix the problem.. otherwise its the internal cabling.
Unfortunately we were unable to get to the distribution point within the building so he could look at the cabling in the apartments utility room.
I phoned our property maintenance and they said they need someone on site before we enter... so if we need to do this, we must arrange a suitable time with BT.

In terms of the connection, it has dropped out a few times over the weekend despite his work, the speed has increased steadily so i'm not sure if this is just DLM...
i have a text from friday @ 16:26 which states 'we need to send an engineer to your home to resolve your service issue, call to book on 0345 172 0050'... i am not sure if this is just a delayed text, can you tell me please or this another visit?

either way the best I can do at this stage is probably give it a few more days to monitor it.

the bizarre thing was his tools were saying it was only pulling in around 67mb yet the router was reporting max speeds at the time. he ran a speed test from the wifi and he managed to achieve higher. BT have some amazing equipment but this was completely baffling.

I've asked our Network Team for an update and also the engineers notes. I will post back on this thread as soon as I receive further information.

I'm just sending you a Private Message to confirm some details so we can arrange this visit.

Thanks Debbie
I have replied to your PM. Please let me know when they will be pencilled in.
Btw - i have been able to gain access to the utility room with the BT box in for when they arrive.

Thanks for the Private Message.

I have passed your availability for an engineer visit over to our Network Team and I will post back on this thread to confirm the date and time of this visit.

Hi Debbie, do we have any confirmation on times yet?

connection has slowly built back up to max speeds but it has only been connected 20hrs last time i looked so it still seems to be dropping connection.
0 Likes
Report Inappropriate Content Reply
Highlighted

Karl
Thanks for letting me know. Thankfully my other half is in today. I gave availability on Monday on the basis I could get time off work and obviously with it now only being a few hours notice I can't be there personally.
nevermind ...
I guess they will call me if there's any issues and they have access to the utility room now.
0 Likes
Report Inappropriate Content Reply
Highlighted

I've contacted our Network Team in regards to this and I will post back on this thread shortly.

This fault will be passed back to Openreach. The engineer will need to go to site again and need access to this DP.

The engineer may just turn up rather than come back to us to book a site visit and so we just need confirmation before we raise this out if you have access now on demand to the DP? (utility room)

Thank you. I have advised our Network Team and I will post back on this thread as soon as I receive further information.

This fault is back with Openreach. The engineer may just turn up rather than come back to us to book a site visit.

I will monitor this fault ticket for further updates.