Hello. For the past week my Internet has been cutting out and turning back on multiple times in the day. It seems to happen atleast twice a day, also the Download Speeds have gone way down. My normal Download speed was 28mbs but now has dropped to 12mbs.

My Router is a D-Link Model DSL-3782 and just now I have removed the Wall Socket Front Case and started using the Master/Testing Socket.

I've ordered you a different make and model of router for testing, please allow 24-48hrs for this to arrive.

I have received the new Router and have installed it into the Test Socket. The Download is still the same as before 12mbs so nothing has changed with this new Router, but the Upload speed has dropped from 5mbs to 2mbs with this new Router installed. I have sent the Old Router back to TalkTalk with the pre-paid bag that was provided, I may have jumped the gun with that one if you ever wanted to compare the two.

I've also discovered a problem I've been having for Months I think, which is static & crackling on the Phone Line. I always thought it was just the Phone as it was an old cheap thing, but after I replaced it with a new one the static & crackling was still there. This new router also cuts out and resets, it has cut off and restarted 3 times just while writing this post.

While I've been writing this post, I've notice the Router cuts and restarts not long after using the Phone, this also happened with the old Phone I replaced so the problem isn't related with new Phone. This happened while the router was in the normal master socket and the testing socket.

Edit: The Router just cut out and reset 2-3 times in a row and I haven't touched the Phone so I've got no idea. When I installed the Router with also the Phone plugged it worked fine for atleast 2-3 hours then now it just cuts out and restarts. I can't make heads or tails with it. Just an Update.

Thanks. Waiting for your reply.

Noise on the line can affect the BB connection so we have to investigate this first. Is the noise on the line still present if you test with a corded handset at the test socket, with the router removed from the line?

If the noise is still present then the next step will be to arrange an Openreach engineer visit to the property.

I've connected the corded headset directly to the test socket and noise/crackling can be heard on the line.

Waiting for your reply

How is the BB connection if you connect the phone, router and filter at the test socket?

Last night I remembered My TalkTalk account and used the Line Checker to do a Line Test, which a fault was found. The page stated they would send an Engineer also they E-mailed the somewhat full details. 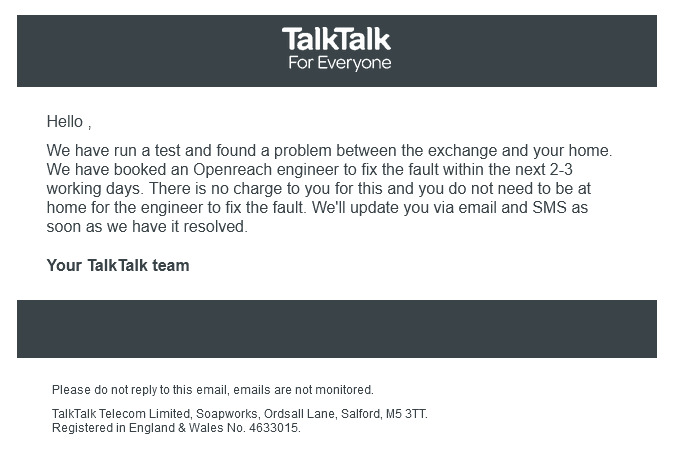 An Engineer came to my home (Which I wasn't expecting so fast, so I almost missed the door) he checked my Router ect inside my Home which was all fine. He had a feeling the fault was located at the Telegraph Pole on the street (which is not on my property obviously, I'll explain why I brought that up later)

The Engineer climbed up there and confirmed the fault. As they never go up there unless there's a call out, the box on the pole had Spiders,Cobwebs and Moisture which has caused everyone's lines to erode,rust and break. He pulled back the wiring until the new/fresh wiring could be seen and fixed the problem.

The Phone line is clear of noise/crackling and the Internet speeds have returned to normal.

Now for the Engineer Charges, I bring those up due to past experience. The last couple of times an Engineer was called out years ago, and the fault found outside my property(exchange ). So going by Talktalk's policy if I remember correctly, I would only be charged if the fault was found within my property, which it wasn't.

I only bring this up due to still be charged both times in the past when they confirmed I wouldn't be. Back to the present time, I didn't call for an Engineer, TalkTalk did, also it's written in the E-Mail that I won't be charged.

But anyway I'll probably be making another Thread about that soon if history repeats it's self, I'll be watching my Bill to see if that Charge pops up.

Thank you Debbie for helping with this issue.

I'm glad to hear that the fault has been located and resolved. Thanks for keeping us updated 🙂 As the fault was resolved externally at the pole then engineer charges shouldn't apply. If you do receive a charge for this (hopefully you won't) then please let us know and we can look into this for you.

The problem has came back. Once again there's crackling/noise on the Phone, the Internet cuts off when the Phone is used to make or receive and the Download speed is slowly going down.

The problem is, not long after the problem was fixed our home decided to go with another ISP due to lower prices. Trouble is the activation date is 08/10/2020.

I have a feeling is going to be one of those "Not our problem anymore" Just unlucky with the timing when the problem came back.

8 months this has been going on, last 2 weeks have been dreadfull, no internet again. Had 3 new hubs in recent months, numerous engineers still same rubbish.

I'm sorry to hear that and I hope everything goes ok with your new ISP.

Steven Heap - I'm sorry to hear this. Please can you create your own topic and we'd be happy to take a look at this for you.