You're reading wayyyyy too much into the negative Power levels on the upstream.

I can tell from the power levels you are connected to a Huawei DSLAM.

This gives Retransmission and therefore no additional latency from interleaving.

Short lines with good upstream like yours report a negative dBm, as that's exactly what they are using.

The power level is stated using units of dBm. That is decibels relative to one milliwatt. A ratio of measured power relative to a standard power level.

In simple terms a negative dBm is simply less than 1 mW.

You're close enough to the cabinet that that's enough power.

The full 20Mb sync shows it isn't causing an issue.

Any routing issues to game servers you have are unrelated to the upstream power.

For the staff to diagnose this you need to post Pings and Tracert's in plain text for the OCE's to pass on to the Network Team to look at.

So your saying I'm close to the cabinet so my power levels can be out?  I am close to the cabinet yes, but my upstream power level looks to be very very weak indeed. I tried to copy and paste from the command prompt but when I hit right click it fills the cmd prompt up and does not copy. I did some searching of how to copy from command prompt and didn't see anything.

Can you link to whatever source you are using to determine your upstream power is "out".

It's using enough power to get enough bits per tone for to reach the maximum sync, with over 9dB of noise margin spare.

I'm not disputing your routing issues, but there is absolutely zero wrong with the power levels or you would not have maximum sync with a bunch of spare SNRM.

Have a look at this table: https://www.rapidtables.com/convert/power/dBm_to_Watt.html

The fact the dBm is negative is neither here nor there.

In case you weren't aware you left your landline number on a screenshot in post 2.
You or an OCE may wish to edit/remove the image.
0 Likes
Report Inappropriate Content Reply

I am a professional halo player. Search me on youtube halo Jimbo. I have flown to the states 5 times and competed. And also competed around Europe and the UK. Most recently at the Birmingham NEC arena. I know there is something wrong with this connection I don't need proof. I am the proof. I'm telling you the upload stats are out. I'm not asking if they are out I'm telling you they are out. I'll give it 2 more days and I'm calling to leave. Period

Is there no attenuator I can be sent?

No there is no such thing.

This is not cable broadband.

You are syncing at the full rate. Your physical line needs nothing.

My car does the clock so I'll never need to maintain it? That's your logic

Is there any way to increase the power level? My brother tested the connection a few days ago with the following tool. He told me they were out. 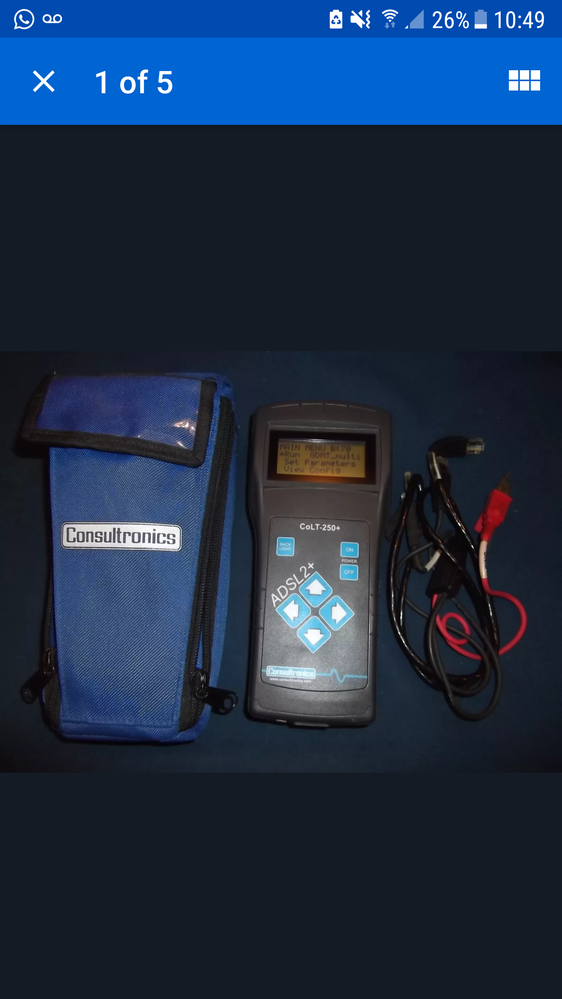 Your lightbulb works perfectly so there's no need to replace it, if you want to use car analogies.

If you have issues with your broadband service then focus on those.

You are incorrectly interpreting stats and figures within the modem/router and making assumptions.

You receive the full sync.

Your line attenuation is only 8dB which shows your line is a very short distance to the Fibre cabinet.

You have a very healthy SNRM (Signal to Noise Ratio Margin).

There is zero from the stats that you posted that show any physical issues with the copper line between your home and the Fibre cabinet.

Quite the opposite in fact.

Any issues you have such as routing to game servers are unrelated to the stats within the modem.

They will be issues within the Talktalk network.

There is physically nothing that could be (or that needs to be) done to your line to improve the xDSL signal.

The Colt 250+ you pictured is only an ADSL2+ line tester.

Your connection uses VDSL2 which that device does not support and would give no power levels of any kind.

It wouldn't give any useful readings.

I guess It's backwards compatible he knows what he's doing. He worked for b.t.  for 4 years,that's not the exact one he used. He had a red one with yellow wires coming out of it. The upload power level is out, I stand firm on that. Regardless of my distance to the cab. You know it, I know it. If anyone else is reading this take a look at my upstream power levels and comment please. Talktalk are trying to palm me off, thus refusing to do anything about it. I happen to have my brother here whom is willing to speak to you about it. Here is his number *removed*. He doesn't mind his number going on here. Call him and you can have an exchange. Regards gareth

For anyone who is interested, I posted earlier in the chat my upstream power level. Look at how low it is hahaha. Minus 10. Lots of issues gaming. Pages slow to load. No reply from tracerts and yet "everything" is ok 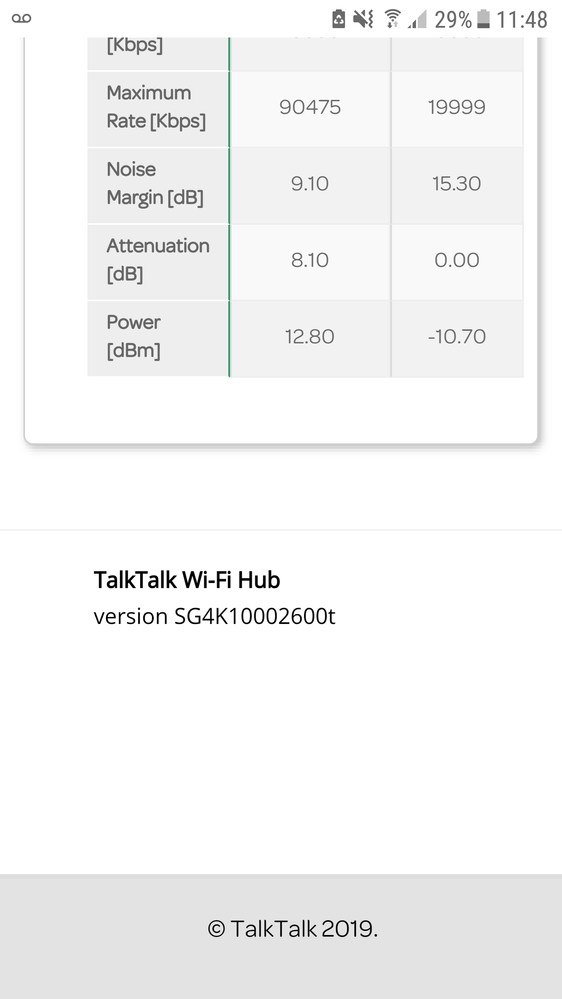 I have tried Googles, open dns, cloud flare, it does make a difference when gaming and loading web pages but only for an hour or so. Any change in the router seems to optimise the connection for a very short period before reverting back to trash. Thanks tho buddy

To the electrically uneducated it may appear to be, but it isn't.

This gives you the full 20Mb that is possible.

I only receive 12Mb upstream.

My brothers line is much long than yours and mine.

As you can see from those figures having a higher upstream power level does not mean you get a higher sync speed. It does not mean the line will perform better in anyway.

Having a higher upstream power means you are further from the cabinet, more power is needed to send the signal.

The power levels are dependant on the line length and cannot be adjusted. They are calculated automatically when your line is initially syncinng.

The Exfo Colt-250+ cannot be backward compatible with VDSL2

Something that is backward compatible is made for a newer standard but still works with an older standard.

The Exfo Colt-250+ was designed and manufactured before VDSL2 was invented.

It will only work with ADSL, ADSL2 and ADSL2+.

It would give zero readings as the Huawei DSLAM you are connected to is not configured to use any ADSL modulation.

No reply from tracerts and yet "everything" is ok

Nobody said everything was okay.

I believe you have routing issues for your gaming. It's a fairly common complaint.

It is not related to your upstream power levels though.

I have since left talktalk. I have gone back with sky. I join sky on the 15th June, Power levels were much higher with sky. And the connection was fantastic. You really do get what You pay for. Goodbye

Sky use the same phone line, same DSLAM, same port and will have the same power output 🙂

It won't be an issue with Sky either. Have a good day.