Despite many callouts in the past, there is usually a passable degree of CRC errors on the line.

Would line speed drops in wet weather suggest there is some grounding on the line?

There's no flooding on it's route to the box the engineer told me i'm connected to.

I don't get the best speed despite paying for Fibre. I get 19Mb on average due to the line routing.

Just wish someone would re-route my line! A friend gets 76Mb, less than half a mile away on a completely different circuit.
So how fast is this governments incentive to get the country to 1Gb going to happen? 😁 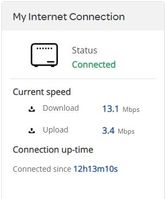 As s side note to any technically minded readers...
How would I read the modems pages through a script? since the silly thing outputs all it's pages in javascript? I used to log my last modems speed using a curl script that read the HTML but it doesn't seem to work this way on talktalk modems. Any other methods I could use to just get that line speed data? for local records.

Wet weather causing problems is a line fault & needs rectifying. I have asked one of TalkTalk's OCEs to pick your thread up and investigate it for you.

The forum is not real-time 24/7 support, so depending on how busy they are & how many are working at any one time, this can take 24 - 48 hrs (excluding weekends & limited cover on Bank Holidays). Alternatively, you can call the call centre or use online chat. The posts are responded to in time/date order, oldest first. So the fewer entries you make on your thread now, the sooner they will pick it up.

In reply to your side note have you looked at "DSLStats" (Google it). It may give the info you want depending on what modem you are using.

I'm sorry to hear this and I'll take a look now. I've run a test on the line which hasn't detected a fault. Is it raining at the moment? Is their any noise on the line when it rains?

That would be too easy a fix to just download some software 🙈
Doesn't support the modem Sagemcom F@st 5364. Some telnet response would be nice .. at least some insight into how the ISP looks at the device. Just want those several digits lol

A new modem is on its way ,but I bet it's not going to speed things up. I know for sure it's the line routing outside my house. So I'll have to pester Openreach to move it and once I've won the lottery I'll probably be able to afford the cost

I'm now at 10MB/s and after yet another conversation with the "Help" I'm told I'm in a "stabilisation period" of X (10?) days (couldn't understand the guy over the phone).

I've been told Hours, a Day and now this. Incrementally getting larger with every contact. SO WHAT IS IT? I'm tempted to contact again to see if it's a Month.

What does it take to either get an engineer to do a full CRC test or have Openreach install FTTP lines? There's 15+properties that would also get it at the same time. Fibre is in this area. a 5 minute walk would result in a 70MB/s increase. I understand the copper line distance issues.

Which is why I keep asking about at least re-routing my line to a more optimal route.

I'm sorry to hear this and I'll take another look now. I've re-run the line tests which are still clear, however the connection looks unstable at the moment which will affect the broadband speed. Is it raining at the moment? Is their any noise on the line when it rains? Does your master socket have a test socket?

Yes its been raining all day and that seems to be a common factor in speed reduction.
You reminded me that I can use the test socket since I have some new microfilters. It's the NTE5C mk4 socket. The faceplate pulls off far too easily tbh.
and I had to source a phone to test with. It's VERY noisy.

Finally have an Engineer booked.

Line is at 8.8MB now, so I'll maybe have dialup speed by the time they get it checked. These days 8.8 is perceptively just as slow tbf

Sometimes tech support just needs to take the customers word on the fix, because in this case I've had the exact same issue reoccurring for years.

In the event of a data breach with your chat logs, there'll be hell to pay! There's far too much personal information asked every time during the chats with different people. What's the point of being logged in?

One last note on this.

It fixed its own speed after 24hrs without rain .. and .. obviously just before the engineer arrived.

There's noise on the line in bad weather, so that's going to be a real pain to get diagnosed!

I've checked the connection stats and your line is showing in sync at 11mb. Is there noise on the line at the moment?

Did the engineer complete any work on the line when they attended?