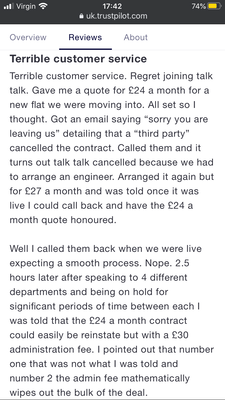 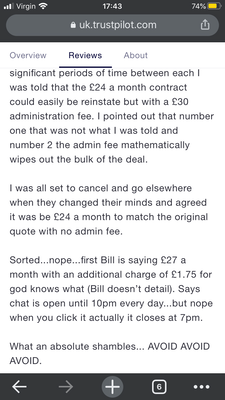 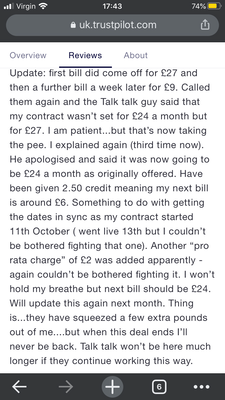 Michelle invited me to share here or in twitter. I’ve choose here in the first instance. Curious as to how talk talk now handle this. Wondering if it’s just for show on trust pilot or genuine.

Suggest you search in the box above for "understanding first bill"

Pro rata charges are always there at the start, and often when you change something like a boost or renew your contract, @Tartanarmy1.

The first bill is produced after you go live, and, rather than backdating the bill to day one as the start of your month, you are charged for the new month ahead of the bill being made up, plus the few days before that added pro rata. This should henceforth all be fine.

Upsetting to get messed around so much at the start though!

Ok perfect, I’ve spent enough time of my life on this without searching a forum. I was invited to share my story here and appreciate the offer but really my bill should explain properly in the first place.

anyone got any idea why I was told £24 four time yet was charged nearly £28?

What’s even more annoying was the talk talk sent me a letter saying I was getting speed boost for “free” yet then charged me £2.50 for it on the next bill. The talk talk customer service guy was baffled.
0 Likes
Report Inappropriate Content

As others have said your first bill will be different from the ongoing price because it covers from when your service went live plus another month in advance charges. Complete your community profile with your phone number by clicking here and wait for the support team to respond.

Except that’s not what happened. My monthly package was failed to be updated 3-4 times. My original contract was cancelled “by a third party” who was actually talk talk . And I was lied to when I was told to call up on go live to have the original quote honoured. I had to argue down the phone and threaten to leave before they honoured the original deal. Shouldn’t happen
2 Likes
Report Inappropriate Content

I'd guess an admin error, not ideal but deals change all the time so things sometimes happen...Anyway sounds like you have your £ 24 a month deal or have I misunderstood?

Apparently I do...but that’s what they said the 1st, 2nd and 3rd time. So that’s three admin errors, conflicting advice, contradictory letter, a “third party” cancellation and 5 hours total stuck on hold trying to sort it. Now add in a trust pilot review and this forum post and I still have not got a satisfactory explanation. Not good enough.
2 Likes
Report Inappropriate Content

Oh and my deal didn’t “change”. Talk talk offered me it, I accepted, they cancelled, I contacted them (cancelled as an engineer had to come apparently) they said I would get the deal (again) and all I had to do was contact then when live. I did and then they said no deal anymore, then after I moaned they offered me the deal but with a £30 admin fee, when I pointed out that makes the deal pointless and was going to leave they offered me it again. THEN didn’t actually apply it and charged me as if I wasn’t on a deal. I called to complain again and now I am told I am on the deal. We will see. How anyone thinks this is a reasonable

way to conduct business is mental.

No one is saying its reasonable. It sounds like something has either not been explained properly or has been actioned incorrectly but equally TT are clearly trying to sort it out.

Hopefully an OCE can confirm you are now on the correct billing because other than that I'm not really sure what you need help with although please be assured that there are many people here, including myself, who will try their best to help as best they can.

“We've had notification from another company that you'd like to cancel your TalkTalk order for account number xxxxxxx. We're sorry that you've decided to cancel your order. Please call us on 0345 172 0088 to ensure your cancellation is completed.”

I got this email to start off with. I feel like I’ve been led down the garden path, all designed to try and offer a good deal and then find a way by hook or by crook to avoid letting me have it as soon as I sign up. That extract from the email is plain wrong. Third party? Who? I cancelled? No I didn’t haha I was desperate to get the WiFi sorted out for moving in. I’ve also got the letter as physical proof what I was told and what happened were completely different. I don’t need help as such, I’d like an explanation. If I were vulnerable or whatever else I perhaps wouldn’t have the capacity to keep going with this and end up being taken advantage of. If it’s happened to me you can bet it’s happened to others. Processes clearly need reviewed.

You know the more I think about this the more I realise it’s all smoke and mirrors with talk talk. I have another letter saying “£30 admin fee” and then “credit towards admin fee”. Now I was told there was no admin fee. When I’m fact there was but I have been given credit to negate that. Key point here is that they are clear to point out the admin fee, but in writing failed to tell me specifically how much credit was added. Why? Just say £30 credit?.

why send an email saying another company cancelled my talk talk when it was in fact talk talk? Why not just say “sorry we have cancelled your order because you need to book an engineer”. Why say it was me when even talk talk themselves know that THEY cancelled it? Beggars belief.

I’m not looking for money, or help or even an apology. What I am looking for is an explanation. I am fortunate in that the price per month could be £60 and I’d not notice it - I am lucky. But some people need every penny they can get. It infuriates me to know that others out there will have been misled. I know there are bigger things going on in the world but my experience of this has led me to this point. I look forward to an “OCE” whatever that means responding to this post. Perhaps I’ll get two letters telling me OCE means different things in each letter.

Talktalk has a habit of sending out generic emails/letters, which means they won't make much sense to recipients.....I  think the only thing you can do in the end is run things past the OCEs every time, to check a contract has been set up correctly.

Make a habit of taking screenshots at every stage of a transaction.

When it comes to the £30 admin fee, these have crept into the list of possible charges this year. It's not easy to find out where/when they apply as for many of us these didn't exist when we last set up a contract.

It is basically bookkeeping and confusing when you are on the receiving end of it all without explanation.

Some of it is probably unavoidable, but I hope an OCE will feed back your comments about the misleading emails.

Thanks I hope they do too. They’d be best spending a few hours creating some clearer generic emails. Surely not too difficult for a telecommunications company? Communication is key after all.

Hoping someone from talk talk can explain? I have an 18 month contract so time to change my mind still.

edit: seems like lots of other people have had OCE’s reply today. Must have missed mines by accident.

The OCE haven't missed your post, they work on oldest time/date first, so each time you post again you move yourself to the back of the queue. Sit tight and they will get back to you.

What an odd system to impose. It shouldn’t surprise me by now. Who works like that! I work in a hospital and if every time someone updated a patient note we wouldn’t then automatically move them to the back of the queue haha. We would factor in the fact that notes can be updated and it doesn’t mean everything is hunky Dory.

Makes me wonder how many replies and views my post would need to get before I get a reply. Perhaps decades from now the oldest date/time rule will be stuck to so rigidly that my query is still pending.
1 Like
Report Inappropriate Content
This widget could not be displayed.