I have had TalkTalk fibre for around 7 months. I have moved home and had a new line installed at the new address yesterday.

When the installer came he said that the connection in the house would be great as it was new copper and we were right next to the cabinet. He said we were on an 80/20 service and he was getting readings saying that we should get 77 Mb/s down.

After the install I asked if I could check the connection before he left and he waited by the door. I got 54 Mb/s using a CAT6 ethernet cable with WiFi off. The ping was 33 ms. He said, "That's cr*p", and had a puzzled look. He had the expression that said he should be doing something to rectify it but he was already on his way out.

What I am most worried about is the ping. It is between 22 and 33 ms on the master socket, using ethernet. Previously I was getting 7 - 11 ms at my old address. 22 ms ping is something I expect from virgin media's DOCSIS 3.0, not VDSL2.

I play a lot of games and this ping is just not good enough. It has caused me to go from having a great in game ping to having a moderate one. People in game are now saying that I appear to be lagging around (Teleporting).

The engineer came very late in the time slot and did not set-up and test the modem on the master socket. I do not think he has done a good job to ensure everything was installed correctly. He seemed like he was in a rush to get out.

I have updated my profile with the details requested.

To avoid delay in possibly having to answer these questions later, I just want to say that the router is wired into my PC with CAT 6 cable. The WiFi is completed switched off as this connection will only be used for gaming. The router is connected to the test port of the master socket. I switched it off at 4 am this morning and left it for 30 minutes before switching on again. I wanted it to re-sync during the quiet hours to gets the best sync.

I've completed a line test which hasn't detected any faults. DLM will be monitoring the connection to get the best balance between stability and performance.

I would suggest allowing DLM time to monitor the connection and adjust the profile.

I did ask the installer when he was here if there was training on the line over the next 14 days, but he said that is no longer done. You automatically go on the best settings.

If it is actually done, will this result in my ping being lowered?

It also doesn't explain the installers response of, 'That's cr*p', when he saw the speed test and his hesitation to leave but leaving anyway without testing on the master socket. I get the feeling he knew he should be doing more but left anyway.

When TalkTalk was first installed on at my old house 7 months ago, I was getting 7 -11 ms immediately after install and a consistent down speed. That's in line with what the installer said about there no longer being a testing period.

Apologies, I'm not sure why the engineer advised this as the line will go through a monitoring process once installed (DLM)

The sync speed also looks good. What speed are you receiving when running speed tests?

I understand how the DLM works. It is constantly monitoring connections, not just new ones.

As for speed you requested, speedtest.net is currently giving a packet transit time of 22 ms to a very close UK server. This can be as high as 33 ms. VDSL2 should ideally be 7 -11 ms and this is exactly how it was before I moved house. I also have virgin media in my new house. TalkTalk is solely for gaming but at this moment Virgin is giving me better pings to the same server. Virign is 15 - 16 ms.

Virgin should be the worst performing of the two when it comes to speed, but at this moment it's better than TalkTalk.

Virgin will have the greatest bandwidth but the worse ping.

On new connections DLM is generally set at the fastest speed and adjusts downward based on the number of disconnections and/or errors in a given amount of time, but this won't necessarily be a profile that gives the lowest ping (fastpath). We can't manually override the profile allocated by BT's DLM system

The ping is getting worse now. 51 ms and 49 ms at just after 4 am. It should not be this high on VDSL2. I've gone from 7 - 11 ms with TalkTalk at my old place, move house and now getting horrendous ping at the new place. I'd say anything above 15 ms on VDSL2 is cause for concern.

I've had the installer on the new line installation day say, 'That's Cra*p' in relation to the connection but do nothing to rectify it. He said it was a new build, with new copper and just across form the cabinet so the expectation was that it should be getting 77 Mb/s down.

This connection is only used for gaming. WiFi is off and connected via CAT 6 cable. The upload speed before seemed to always max out on a test, now it seems to be capped at 10 Mb/s with little burst during test were it is trying to go over 10 Mb/s. 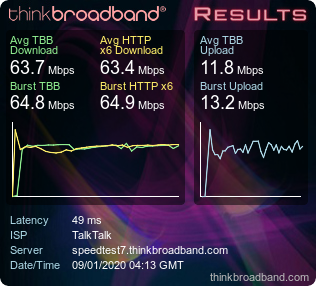 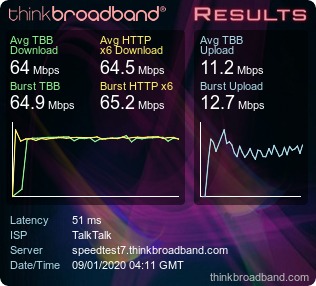 Could you run a wired ping and trace route please and post the results into the thread.

Run a Ping or Traceroute

Ran another test before I did the ping and traceroute to google. Got a 44 ms ping. I have also included the ping I now get in games. Image below.

In the image of the game ping you'll see network ping at 110 ms and an amber warning saying it is borderline. That ping with TalkTalk at my old address used to be around 50 - 60 ms to that server. Server latency was much lower too.

The person who installed this line a few days ago should have set-up the modem for me and tested the connection. Instead they made a comment of, 'That's cr*p', after I asked them to wait while I set the modem up and tested it.

They should have ensured it was connected to the master socket, checked for bad connections and had the DLM reset. Really not happy with this install. 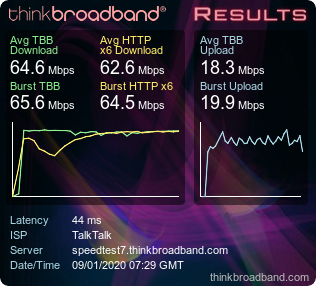 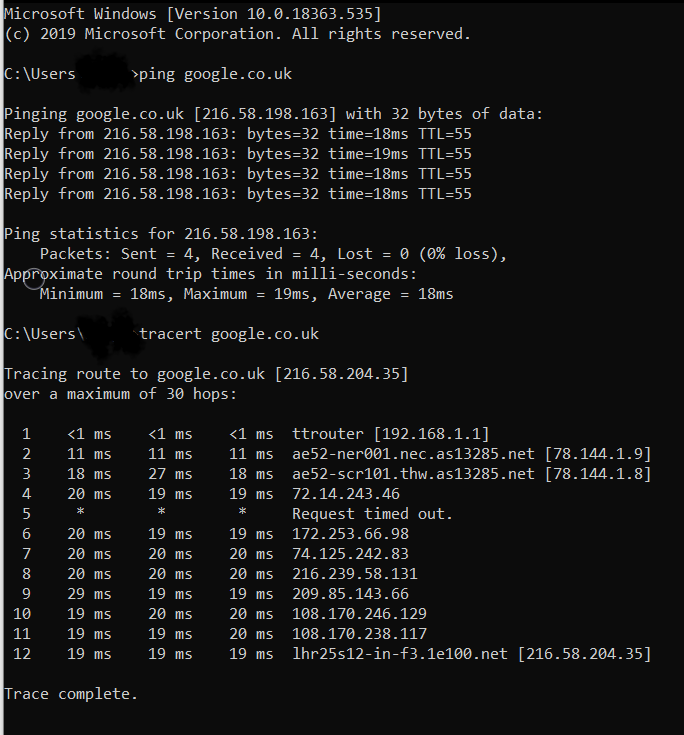 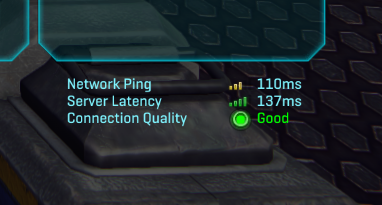 Can you also please explain what the amber symbol means when I look at my connection in the TalkTalk service centre?

Could you try pinging and trace the game server as the trace routes to google look ok? If you run a speed test what speeds do you receive? What symptoms are you seeing when gaming?

The line test is also clear and the connection stats look ok.

The game developer does not publish the servers IP addresses so can't do a traceroute.

I'm just going to leave the modem switched on and tucked away in a corner for two weeks to see if the DLM decides to give me the profile I had at my old house.

I won't be using the service over that time. I'll just use my Virgin Media connection for the next two weeks as it is giving better pings than this new TalkTalk line. If it hasn't sorted itself within two weeks, then I'll call up to cancel.

P.S. Also, please explain why I am getting these IGMP requests every few seconds since the modem was first switch on at the new house? I only have the PC connected to it and even when it's not connected (enet cable removed from modem) it still gets these requests. 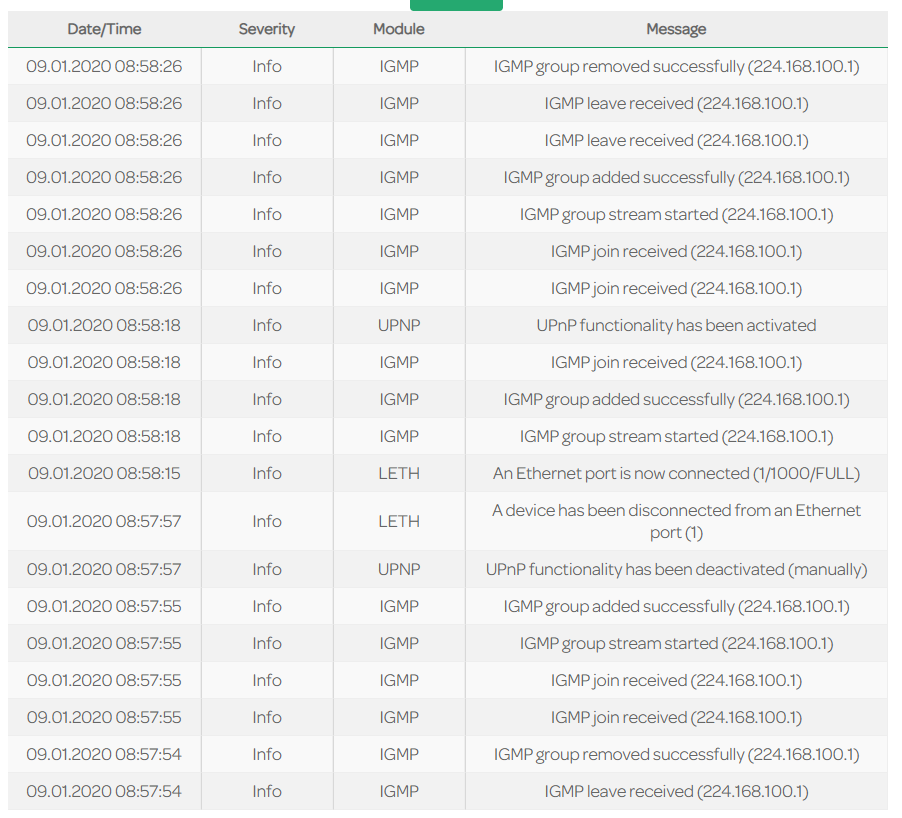 Ok, please let us know how the connection compares over the next week. This is currently on interleaved at the moment, unfortunately we don't have any control over this as this is determined by DLM and the stability/errors on the line. Hopefully this will adjust over the next few days.

The requests above look like they are related to the pings and trace routes.

I'll let you know what it's like in two weeks.

Now that I know there is interleaving on the line, that explains the comment from the installer of, 'That's crap' and the look he had before he left. The look which said, 'Oh, I should do something here', but he was already half way out the door. As he was leaving he told me to plug it into the other socket and it should be fine.

He's messed up this install by not connecting the modem up to the master socket and requesting a DLM reset.

Me having to disconnect it from what turned out to be an extension socket and connecting it to the master socket myself, has caused me to lose any chance of going on fastpath. Now I'll be stuck with some form of interleaving until such times that there is a catastrophic issue that requires an engineer visit, at which time they could request a DLM reset.

This sucks. Absolute waste of money.

P.S. The IGMP requests have nothing to do with pings and trace routes. It believe it has something to do with peripherals connected to the modem. Like IPTV boxes for TalkTalk TV, but I don't have any of those connected. Just wondering why the modem is getting those requests every second of everyday since the line was installed.

Could you bump your thread on Monday and we can re-check how the connection stats compare over from over the weekend. We can also check the stability and if there are any errors on the line.

The modem will be left powered on and connected to the master socket but not used by any PC over the weekend. Lets see what it's like on Monday.

I'm bumping this up as per your request. Can you tell me how the line is looking on your end what interleaving there is?

Nothing seems to have changed. Noise margins are still the same and ping is still too high to game with.