I have recently upgraded to a TalkTalk Wi-Fi Hub (version SG4K10002808t), previously on a TT Super Router.  I run a media server in the home and following the upgrade have found there are some LAN connection issues to the server (Plex). Advice on the support forums for Plex indicates that this is usually attributed to router-based DNS Binding Protection - and that disabling or creating an exception for direct access to the server will resolve the matter.

So, here goes, does the Hub have DNS Binding Protection and can I add an exception to the router settings? Didn't have this issue with the Super Router, but don't really want to downgrade to older tech to resolve this?

For example, on DD-WRT based routers we would add

whereas if we are using pfSense’s internal DNS resolver service, we would add

With respect to the connection speed, I have noticed that the Hub Device Info is telling me that my Maximum downstream rate is just shy of 65K, but that my actual rate is 56K. Wired speed tests at the router tell me I am only getting on average 45K from there.

The line quality info on my old Super Router told me I had a downstream line rate of 65K (was this actual or not?). However, I'm sure we were getting better than 45K on speed tests - as I was getting over 50K on the network?

I don't know if the hub has rebinding protection but if we assume for the moment that it does then you'll need root access to run commands. The only way I know of to gain root access will not work on 2808t firmware.

It's possible that it is a DNS feature for TT so not router related (also possible its not though) so it may be worth manualy setting the DNS to another DNS server but you'll need to Google to find one that doesn;t have rebind protection.

I have already changed my DNS servers to Google (8.8.8.8 & 8.8.4.4), but that hasn't helped completely.  I'm still getting an indirect connection to my media server via wifi (which is an indication that the local secure connection could not be established).

So here's interesting, just swapped back in my old Super Router.  Secure connection to media server established and much better speed test results. The top three are today with the old Super Router, the others are with the Hub.  Why was I losing the best part of 10mbps with the newer router?  I'll leave this now for an OCE to pick up (I know replying bumps it down the list 😁) 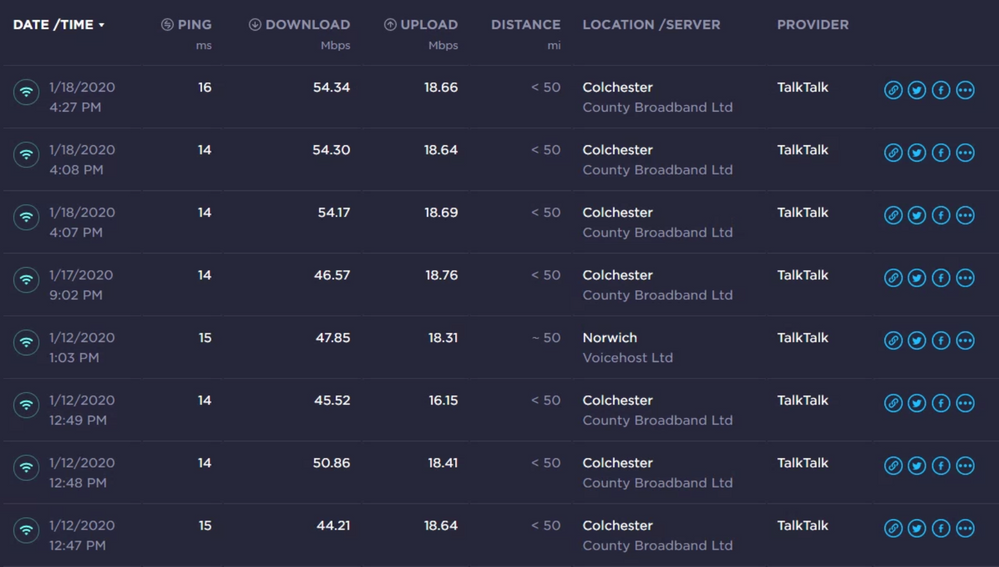 The latest speed tests are high for your current sync speed (57.9Mbps), I don't know why the speed test via the wifi hub were so much lower, were all the speed tests carried out on the same device, connected to the router by Ethernet cable?

Thanks for picking this up.

Yes, all tests were conducted on the same PC connected directly to each router via ethernet cable. Just swapped the routers over and re-ran the tests. The latest (Super Router) speeds are I believe what we were getting before on the SR. The Hub seems to have been consistently slow by comparison?

Could I just confirm, is the sync speed also lower on the wifi hub or just the throughput speed?

Thanks for your question - hopefully, some of this will help you.

When then running a Speed Test on a PC attached directly to the Hub, I was getting around 45mbps.

Which one of these is the Sync speed you have asked about?

On the Super Router I only have a Downstream line rate figure (is that the Sync speed?) - which is currently showing just shy of 58mbps.

When running a Speed Test on a PC attached directly to the Hub, I am getting around 54mbps.

However, I have evidence here from 2018 supporting my memory that we have been getting over 65mbps Downstream line rate through the Super Router? I would obviously prefer to get back to that and hopefully achieve associated improved throughput rates.

Ok thanks for confirming. I've re-run the line tests again and it has detected a potential voice fault. Are you experiencing any issues with the voice service such as no dial tone or noise on the line?

If the voice is clear then would it be possible to re-connect the HG633 router at the test socket for at least 48hrs so we can see if DLM increases the sync speed back up again?

Hi Michelle
(Replied by email but don't see that here - apologies if this is a duplicate).
I'm not aware of any line issues. Calls have sounded the same as they always have? But I can check that when I get home.
The router has always been plugged into the main / master socket, which has had a filtered faceplate on it for sometime. The router is not plugged into the test socket.
Please advise.
Kind regards
0 Likes
Report Inappropriate Content Reply
Highlighted

Ok thanks for confirming this and please let us know how the voice service is. Would it be possible to re-connect the HG633 router back at the test socket?

Apologies for the delay - rather hectic at work.  Yes, I can swap the connection to the test socket - most likely won't be until this weekend, but will do so.

Finally managed to connect up directly to the Test socket.  Downstream line rate up by about 2mbps. We've no phone while this is in here but will leave for the weekend to see if the DLM goes back up.  Question is, if it does, what then? Previous 65mbps was with everything connected up (i.e. phones).

Left it for the weekend - although connection briefly interrupted by a power cut connected to the storm on Sunday.

Stats at the router remained the same - i.e. DLR circa 59 Mbps. Speed test consistent at circa 55 / 56 Mbps 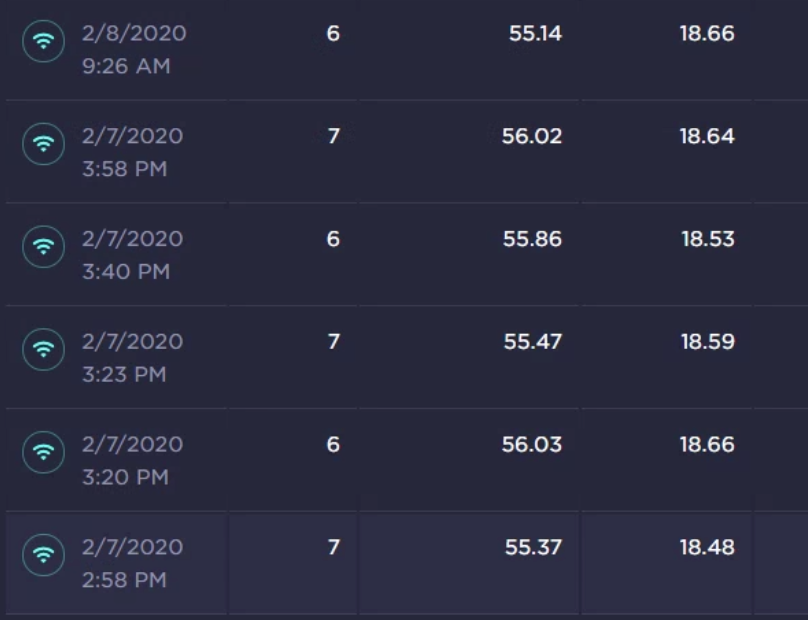 I then noticed that after the power cut on Sunday morning, the DLR had risen to a much higher value

However, the actual speed recorded at the ethernet connected pc is less than when the DLR was lower?

I can't keep the house phone disconnected for much longer - what is the next thing I need to do?

Thanks for your help and attention

Thanks for the update. Is your router still connected to the test socket at the moment?

Power down and now back up.

Do I need to wait to see if sync speed increases?

Thanks for trying that. Could you bump the thread tomorrow and we'll check to see if DLM makes any changes in the early hours of the morning