My wifi hub has now been installed and running for a few days with DLM making no changes, so some sort of interesting stats from the gui that an OCE may want to feed back to the development team.

Downstream noise margin is being reported as 0.00 dB.

Upstream attenuation is being reported as 0.00 dB.

Downstream attenuation is being reported as 25.90 (usually been in the 19-21 range with previous TalkTalk super routers).

But the thing that concerns me is the performance of this "best ever" modem-router.

I have listed the upstream performanc loss already.

With this new wifi hub my max. rate has dropped to 35 Mbps with an actuall of 32 Mbps. This unexpectedly large drop in downstream performance could be linked to the unexpected rise in the downstream attenuation.

But having spoken to someone in the faults team they are happy with this performance level as it is still within my predicted range (but massively less than I used to get). It would appear that everytime TalkTalk introduce a "new, improved" router that my performance levels go south.

But the wifi is better, although I never had any wifi issues, and this new router didn't resolve the issues I was having with the HG633 with V2.00t firmware.

Thanks for the update. I've checked the connection stats and the sync speed does look lower and I can see a few re-connections. Is the connection unstable or have you rebooted/switched off the router?

How long has this router been connected for? Is it connected at the same socket as the previous routers?

Hi Michelle - thanks for the response.

The new router arrived Tuesday (or may have been Wednesday) last week. Immediately swapped out the old HG633.

I have done a couple of reboots since then. The router totally lost the internet whilst I was trying to customise SSIDs, passwords and DNS addresses etc. (so could have been something I did). To recover from that I initially power cycled the router (made no difference) and then I pin reset the hub which recovered everything. I then re-customised without problems.

Yesterday I did a 30 minute power cycle to see if that improve matter - no change.

The router stats have remained unchanged by any of my power cycling etc..

Apart from those outages the unit seems to have been perfectly stable - just a lot slower than I would have expected.

Hi iefbr14, your maximum line speed as advised by BT is 37.6 and you're connected at 33.6. What are your speed tests showing? Are you seeing issues with pages loading or downloads?

The speed tests to my devices are consistant with the currently degraded downstream performance levels.

I have been regularly recording my performance levels using the "My Account" speed tester. The step changes where routers have been swapped should be clearly evident.

Apologies Ady but I think you are missing the point. Why is TT's latest and greatest wifi hub performing at such a significantly reduced level compared to your other fibre routers ? Did any of your promotionl material for this new device state - our best wifi ever, but we will reduce your performance by 30% ?

I appreciate what BTOR state regarding my line speed, but those figures tend to be the "impacted" line speeds which TT in particular use so as not to "over sell" performance expectations. I also believe that the BT estimates do not make any allowance for the installation of vectoring in any particular street cabinet. My performance increased by around 6 Mbps once vectoring was applied to the cabinet. The BTOR engineer that recently visited my house stated that it was one on the cleanest lines he had seen (with respect to length and signal quality). I find it absolutely disgraceful that you think the BT figures justify TalkTalk's abysmal level of concern in this instance.

With the wifi hub my max. download speed is 35 Mbps.

So yes my line is performing within the BTOR spec. - but it is now very nearly 30% slower than the level it used to perform at. And the only difference is the change of TT router. There is something technically wrong here, and you appear to be happy to dismiss it. TT have over the last few years developed a very poor reputation for the routers you are supplying, and here is another instance of a potential router problem and you seem to be happy to brush it under the carpet. Quite unbelievable.

You (TalkTalk) have just charged me £30 for your latest and greatest router and the only difference I have seen is a 30% reduction in performance. I have paid you to provide me with worse performance !!

I'm sorry, but I personally find this totally unacceptable and I would like to know how TT are planning to resolve this situation. I am not prepared to pay extra only to receive a substantial reduction in my service, and TT hiding behind BTOR weasel words is not an acceptable solution.

Do you still have the 635? If you do what happens when you reconnect that? I suspect we'll have to book another OpenReach engineer for you, but getting through the problem of the BT min and max to get it booked will take some doing. Let me know if you've still got the 635 and what it shows and we'll go from there.

OK, here are the numbers from the HG635 (screen print attached).

Max. downstream jumped from 35 Mbps to 39Mbps with the SNR now showing 9.1 - so room for improvement if left online for DLM to kick in.

Max upstream jumped to 9164 Kbps from 6000 Kbps with the SNR now showing 12.2 (up from 6) so again a lot of opportunity for DLM to improve matters.

So why would this need a BTOR engineer as all he can do is look at the line and the HG635 seems to indicate  there are no line issues, and I certainly have no intention of paying for a "no fault found" BTOR callout. This appears to be a "simple" router problem. Wouldn't it be sensible to try another wifi hub out first before involving external chargeable resources ? Send me a new wifi hub for testing which I will return after proving things one way or another. 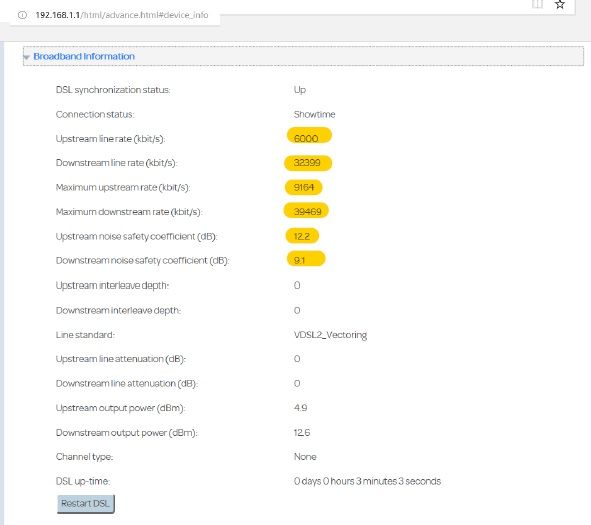 Again - I did not pay TalkTalk £30 for my performance to be degraded in this way !

EDIT - A BTOR engineer visited my house just a few weeks ago to resolve my banding issue. Did his report indicated any possible line problems ? The occurance of my performance issue correlates totally with the installation of the wifi hub.

Are you happy to use the 635 if I refund you for the new router?

@Anonymous Would it not be best to go back to your CEO contact who arranged this for you?

Unfortunately I can't use the HG635 for any length of time as it appears to lose the DNS servers after a couple of hours. It reports not being able to find web addresses which becomes very annoying, this happened with both V1.06t and V1.10t firmware. Resetting the router's DNS addresses resolves the issue (for a while).

But I do have an HG633 I can use. The performance of that was mid way between the HG635 and the wifi hub. With a bit of luck the V2.00t firmware may at some point in time be upgraded to recognises vectoring and I may get full HG635 performance levels back.

This has been a very sad saga.

As you seem to be very unwilling to provide a replacement router then I will accept the offer of a refund on the wifi hub.

I only noticed the performance hit when I went to the wifi hub. Pre-hub I was getting between 43 Mbps and 49 Mbps depending which HG router I was using and if vectoring was being correctly recognised or not. I was using my HG633 in the days immediately before the switch to the wifi hub because of the DNS issues I was having with my HG635.

But today performance recovered immediately when I reconnected the HG635 as per the stats I forwarded. As far as I know DLM only actions changes in the early hours of the morning, a time period not covered by today's router swap.

This morning with the wifi hub - max downstream 35 Mbps, SNR 0.0 dB. With HG635, max downstream 39 Mbps, SNR 9.2 dB. A far better connection was negotiated. Instant change. Does DLM react that quickly ? And I did a quick swap, so no session restart.

I seem to be having the same problem, my HG635 performed better than this new wi-fi hub and the stats don't seem right, not sure if the router is reporting the correct info back to dlm? I'm stuck now on a lower speed than the HG635, i also paid £30 for this.

Cheers, nice to know I am not alone.

I think it is reasonable to expect teething problems with new devices (or hardware-firmware combinations). Look at all the wifi issues that have already been reported with this device.

If wifi problems, is it not also possible that some devices could have performance issues.

Do you have an alternative router that you could connect to the line to check the sync speed?

I did that earlier today at @OCE_Ady's request.

The results were posted higher up in this thread.

Apologies I missed that. I can send a replacement WiFi Hub to check if it's an issue with the router. Would you like me to arrange this?

Debbie, please can you clarify who is managing this thread for TT ?

I had an exchange with @OCE_Ady this morning where I suggested that a new wifi hub be sent for testing. This was apparently rejected and an offer of my £30 being refund was made, which I accepted.

Following this @OCE_Chris seemed to be asking for more performance information.

Now you are asking if I want to try a new router - all just confusing me.

I am willing to test a new wifi hub as that was my original suggestion, you may need to check if @OCE_Ady has already processed the refund.

If possible, a check that the new hub is from a different batch to my current hub may eliminate one possibility (given TT say the wifi issues were batch related).

But please - one TT OCE owning my problem would simplify things from my point of view (and save duplication of effort at your side).

EDIT - If the refund has already been processed can we please stick with that solution. A £30 refund but no new router.

I'm really sorry for all the confusion. I will now look into this fault.

I have ordered a replacement WiFi Hub and a returns bag, please can you let us know if the speed still drops when this router is connected.