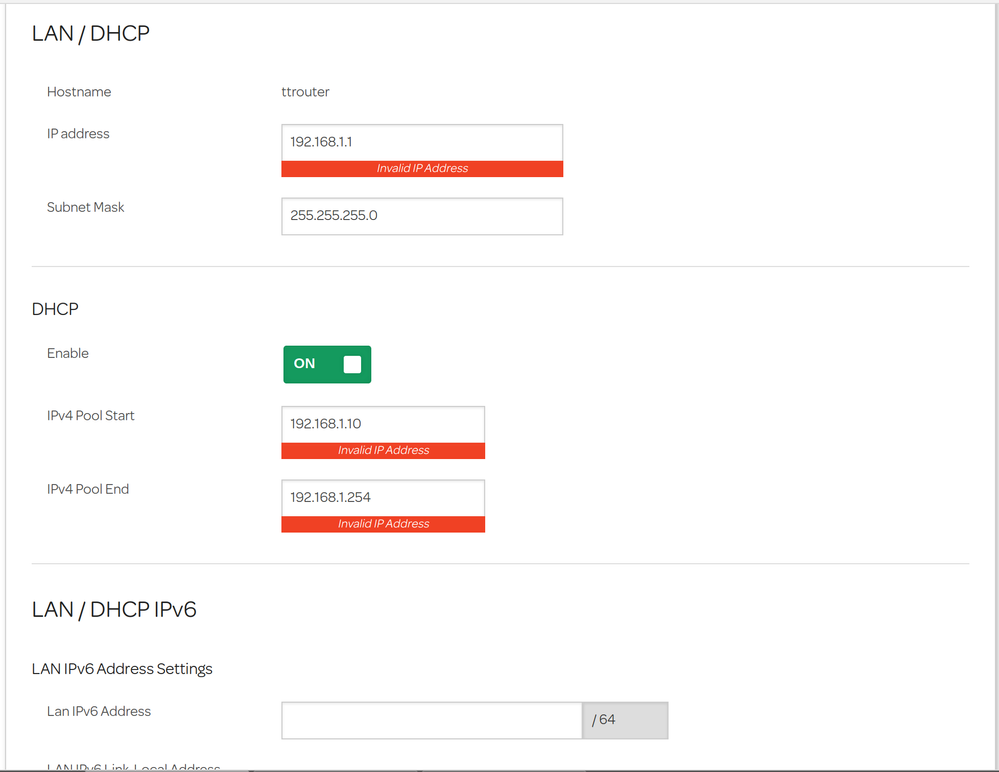 i'll pass this along to the team who are attempting to reacreate the issue.

Literally got to that page. Alter nothing and hit apply
Those who do not learn from Dilbert are doomed to repeat it
0 Likes
Report Inappropriate Content Reply
Highlighted 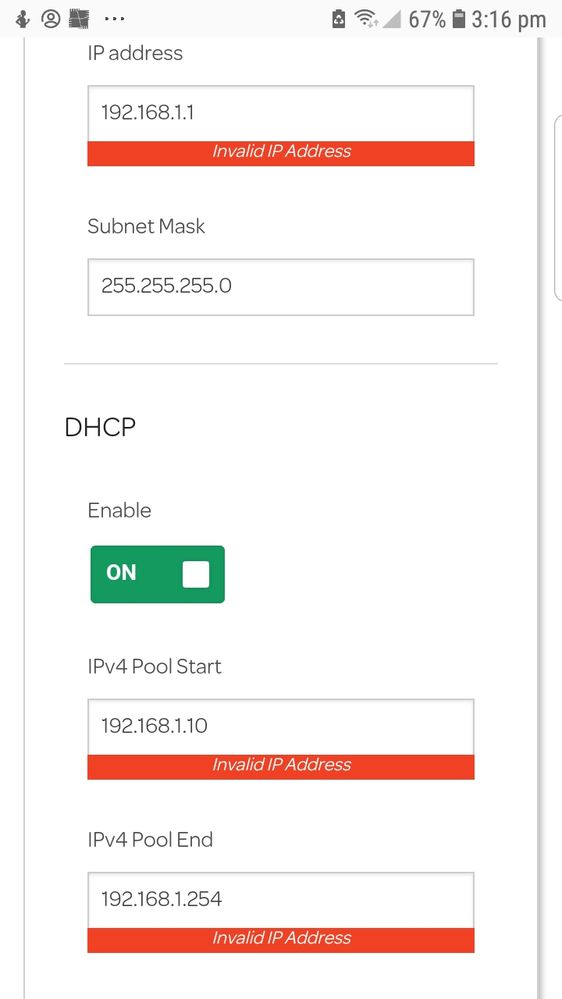 Yes don't touch anything and hit apply and get this

Just had contact with TT via chat and I was astonished to be chatting with someone in the UK who actually wanted to try to answer my questions honestly - how times have changed and I could easily be heading back to TT now.

But not sure this new hub is the incentive I had hoped it would be !  My printer driver only works if it knows the IP address of the printer, it would be a pain to have to advise it of a new address at every power cut (for example).

But wait, my existing tp-link TD-W9970 can have its modem turned off an just do wi-fi from an ethernet feed, so can this super new "hub" work with that, i.e. just work as a modem ?  Or is that another feature they forgot to implement ?

Come to that, I suspect my TD-W9970 will probably be able to talk to a new TT fibre connection anyway, so maybe the above question is a bit hypothetical.  But I do quite like the look of the new hub (how sad am I ?)

Can't you manually configure the IP address info on the printer itself, don't forget to set this to something outside of the DHCP pool address range?

I suspect I can nail down the IP address at the printer itself, if only I knew how !  In fact I may have inadvertently done that right now, after messing with three different routers recently it now seems to come up by itself at the same ip address like it hasn't always done before.  It's not outside the DHCP pool range of any of my routers, but far away from the address that they start allocating from so that clashes are unlikely, especailly as it's "always on" (still on the network in sleep mode) so gets onto the network very soon after the router reboots.

On the 7th September my TalkTalk fibre service went live, which gave me plenty of time to work out how to pin down the IP address of my printer at the printer itself.  So I now have it at 192.168.1.8, and the TT Wi-Fi hub has no problems accepting it at that address.

My first impressions of the new hub are favourable apart from how huge it is, and how long it takes to connect (power-up to connected took 150 seconds just now).  Of course the latter doesn't matter in normal use except when I need to unplug it to move furniture around !

This morning I tried my old tp-link TD-W9970 (because I wanted to know if it worked with TT fibre as it would feel good to have a spare handy "just in case") and it works just fine, connection speeds same as the TT hub, wifi range comparable or maybe even better, and of course it has a few nice features that they left out of the new TT hub, like a "guest network", all for £38 currently.  Of course as TT have remote access to the TT hub they can identify if that's what you are using so they could potentially scupper the use of non-TT modems.

Honestly I cannot imagine any basic-basic modem/router device that couldn't do that. It creates enormous issues for people that have an organized network. It's a 120 pound device...supposedly...why can't it do basic stuff? The easiest thing to do is just use the default firmware with all the proper settings Sagem has given the device and stop this locking policy. Just add a user password and an admin password for someone that knows and wants to change a few things. I always thought TalkTalk wanted to promote security and that cannot happen with locking settings and making you an easy target by having exactly the same settings as anyone else on every network without being able to reserve IPs or change your DHCP pool range, change your DNS or even the most basic, your device's IP!!! Please just resolve these issues otherwise it's a major downgrade from every device available on the market, even the 5 pound ones........

> Please just resolve these issues otherwise it's a major downgrade from every device available on the market, even the 5 pound ones........

A router with a DHCP server that does not allow IP addresses to be set to infinite timeout/always use this address is a waste of space. I've recently been upgraded, and received this Sagemcom router, and I'm very glad I wasn't charged for it, because it would have been sent back as not fit for purpose. Even free, it's barely fit for purpose, being deliberately crippled by TalkTalk to remove any useful management features. Those that are provided don't seem to work properly.

It is a bug in the firmware that I raised with the developers a while back. Hopefully, this will be resolved in the next firmware release.

Anything else, please can you create your own thread, TT insists on one thread per customer per problem.

> It is a bug in the firmware that I raised with the developers a while back.

Smacks of entirely deliberate 'feature', rather than a bug. A 'feature' specified by someone with absolutely no clue as to how SOHO networks are managed.

If it's a bug, then the testing was utterly incompetent, and the thing should never have been released into service. It's clear from one of the other posters that the generic Sagemcom router is a competent device, that has been deliberately crippled by TalkTalk. The rationale for this crippling escapes me. If I were Sagemcom, I'd be insisting that TalkTalk remove all references to Sagemcom from this device, lest their good name be blackened by association with this piece of junk.

I note that you reported this 'bug' four months ago, and there has been no fix.

I've just encountered the DHCP pool range bug, too, whilst trying to address the inability to reserve DHCP addresses.

> Anything else, please can you create your own thread, TT insists on one thread per customer per problem.

I suspect, in that case, that they don't want customers to find out that other customers are all experiencing the same problem (and therefore decide, en masse, to start pressing for a proper service).

'User communites' are a way to get customer support on the cheap. There are consequences to that; customers are free to express their opinions on the shoddy service they are receiving. Until the moderators delete any negative comments, of course...

Whether you want to call it a bug or a forgotten feature is up to you. The most important thing is that it will be fixed when the next firmware is released.

I'm not calling it 'forgotten'.

> The most important thing is that it will be fixed when the next firmware is released.

Have you been given any ETA as to the roll-out date of such a fix? As I noted, it's now four months since you said you had reported it.

Is there a bug tracking facility, so we can see known bugs, and the progress through their rectification? Otherwise everyone wastes time repeatedly reporting and responding to the same 'bugs', over and over. I'm sure you must get tired of it...

So long as it is fixed, does it matter?

I can't give you any ETAs as I am just a customer.

No there is no bug tracker.

> So long as it is fixed, does it matter?

It matters because there's a significant distinction between the way a company will handle a 'feature' and a 'bug'.

A good company will address identified bugs in a timely manner.

A good company will have understood their product needs, and implemented a feature set that is fit for purpose. There will be significantly more resistance to changing a 'feature' than there will be to correct a bug.

From what I have seen so far, TalkTalk do not appear to have implemented a feature set that is fit for purpose, nor do they appear to be addressing a bug. I suspect that we will meet resistance to change the 'feature', because we will have to convince whichever genius it was that defined the feature set that they are wrong.

I've spent enough time on 'community forums' to know that the corporate reps on them often have very little knowledge of the products they are supposed to be supporting, and will often make statements that have no basis in fact, and make promises that are not kept. I've never got cosy with any such reps; I keep them at a distance to remain an independent voice. Sometimes I support the product against unreasonable criticism, sometimes I'm one of the most scathing critics.

I'm not expecting to see the problems with this router fixed in any reasonable timescale. It's a shame, because, underneath the TalkTalk front end is a capable modem/router, by all accounts. If I have to go out and buy a third-party router, it will be a terrible waste of resources, as I'd dump the supplied device that I am paying for through my fees; nothing is 'free'.

Then you had better create your own thread & TalkTalk can respond.

I suspect he already got the message that he should start his own thread, I think his problem is "will TalkTalk respond if he does" ?

As a matter of interest, how many firmware updates have there been since this device was released ?

None, but it is at the beta testing stage.