Does look like it, as standard fibre is max 40 down and 10 up, which is suspiciously close to your stats (as your actual speed test results will always be a bit slower than the sync speed of your line)
0 Likes
Report Inappropriate Content Reply

well its better than plusnet for sure, 3 days a week i was getting 10mbs down if lucky, the profile did go up this moring showing max downstream at 54mbs, but i pulled plug by mistake and went tumbling back down, the outer reset at 2:30am this morning, went from upto 48 on router, though max downstream was 54

i would just like to say i was contacted by a Nathan from the ceo office, to speak to me about the bad experience i have had. have to say a really nice person and understanding.

Cool, well if you are actually getting speed test results that indicate a download speed that is over 40 mbps (can't quite tell from your post if this is the case) then this would indicate that you are correctly on the 'speed boost' package. Best thing to do now is leave well alone, don't reboot the router at all if possible, the more you can leave it alone during the first few weeks during the 'stablisation period', the better the network will be able to determine the best speed for you and get your connection set to a nice stable speed.
1 Like
Report Inappropriate Content Reply

yeah i notice it does rise after a period as per norm, its up a little into the low 40's this morning

That sounds good then, over the first few weeks you may notice your router dropping and reconnecting in the early hours of the morning, this will just be DLM making adjustments to your line profile to try to stabalise your speed at the best possible speed for your line, so is nothing to worry about.
1 Like
Report Inappropriate Content Reply

im back to work next week so getting back to routine, so no late night cod, so wont notice, but cheers for info

I ordered the boost, and nothing for a week, so just asked today where it was and was asked to reboot router for 30 mins, rebooted router for 45 mins and then speeds only went to 42mb from 38 and the down went down from 9.99 to 9.5, got onto live chat only to be told I only switched router off for 1 min, and nothing could be done if i did not follow instructions!! so cancelled the boost, just could not be bothered talking for half an hour and getting nowhere. 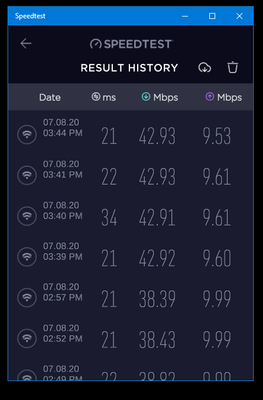 Doing one single router shutdown for over 30 minutes is a good idea as that will force your router to generate a new session when it restarts, this will help it pick up any changes to the speed you are entitled to, but once you have done that single restart you then really need to leave the router switched on 24/7 for several days, ideally a week or more, this will then allow the DLM system to monitor your connection and adjust your line profile to give you the best possible speed. If you have cancelled it now then I know this is all irrelevant, however it is always worth giving things at least a few days if you try it again in future for things to settle.

On Fibre, DLM monitors your connection constantly, however it only makes adjustments to your profile once a day in the early hours of the morning based on all of the information it has gathered over the previous 24 hours. 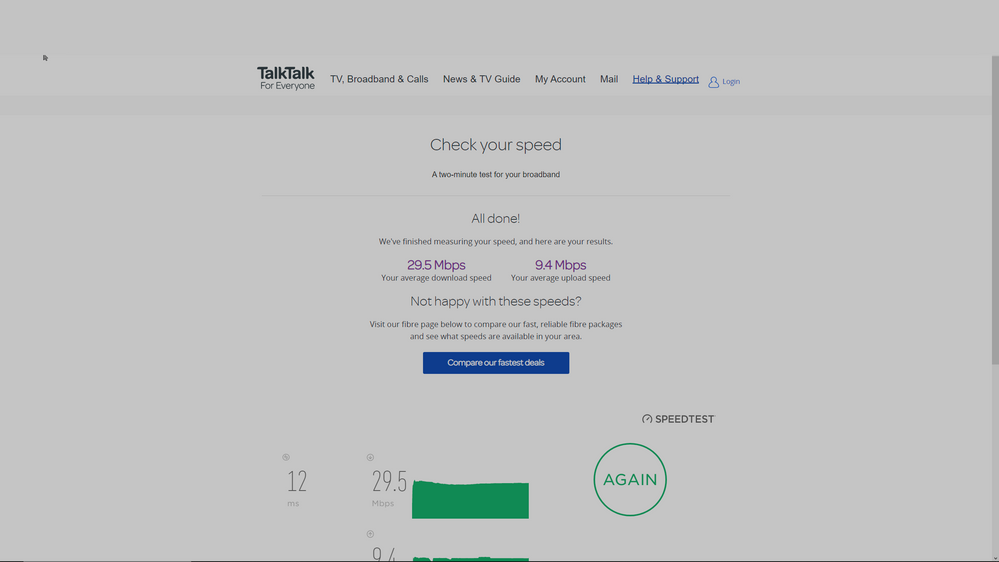 well this aint good, in fact thats terrible, been in low 40's all day and then wallop

Is that just a one-off test, or is it consistently down at that speed ?. As you have only been 'live' a couple of days still best to leave things a few days just to see if things settle.
0 Likes
Report Inappropriate Content Reply

last couple hrs it happen, noticed when trying to watch 4k youtube and started to buffer, hence why tried a few speed tests on dslreports and btwholesale and talktalk one, all around the 26 to 29mb/s

Would be worth keeping an eye on it over the next few days to see if there is a pattern of getting slower results at certain times of the day. Obviously during peak evening hours there is more contention on the phone network and so if you do only see these issues during these peak times then letting the OCE's know that will help them investigate.

@Skynet_TX
WHY oh WHY do you think 42mb is ok when promised 67??  am  I missing something or do you work for talktalk?? I cannot see why anyone paying for 67 would accept 42 with a lower upspeed than already using..   makes no sense to me..  when I had 100 mb from virgin I was getting 94 which was acceptable if I was getting 62 i would think that was acceptable. but the main point of my cancellation was being told I had lied and only shut down my router for 1 min where as I had it shutdown for 44 mins

just giving some leeway as new connection, im still under 30 day guarantee anyway, plus its free atm as gave me 2 months free, because of the hassles, the low speed at peak was one issue i wanted to get away from, plusnet i was down to 10mb/s at peak and no one gave a toss tbh, but at least here ppl are helpful.

but if continues, then elsewhere i will go. but im reasonable atm because its new

profile is pretty poor atm, i would expect to see a decent leap over night, fingers crossed 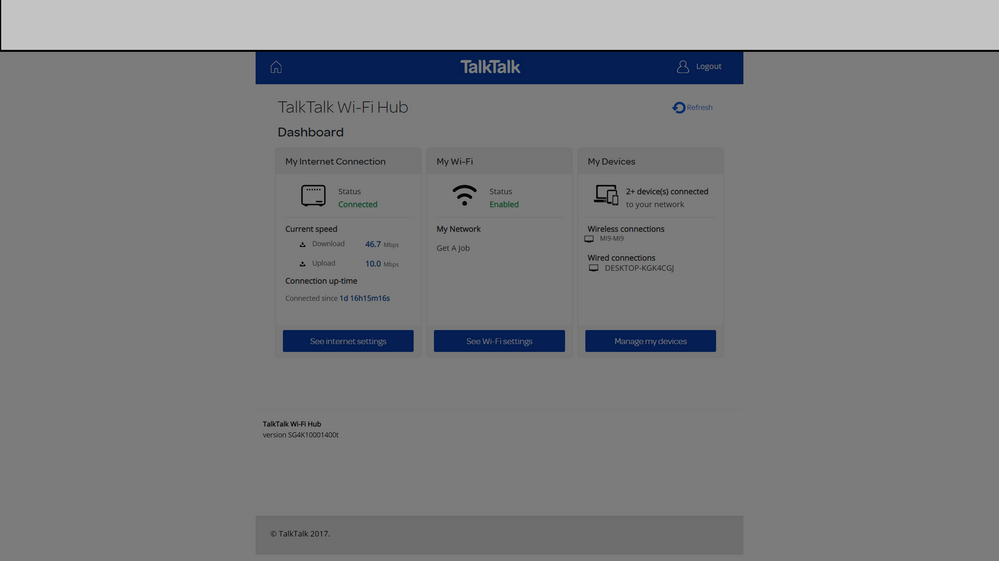 I'm not suggesting that the speed you are getting is acceptable long term, all I'm saying is that when speed boost was activated your speed might not leap to the maximum value immediately, it is possible you might have to wait a few days for the system to determine the best speed for your line and to settle down.

If your speeds were still significantly below what was promised 2 weeks after speed boost was activated I would totally agree with you that would not be right and would need to be investigated as a fault.

@andyb68
TBH i've never had a problem with the fibre, except when the line from the street box cracked and water got in, openreach replaced whole line for me ( for the cost of a coffee ) and i went from 32 mb to 38mb and it hardly flickered since.

@Skynet_TX
I understand what your saying, but i believe a two week wait would be unreasonable in a "monthly " boost, i would expect 24/48hrs at most be needed to  get full speeds.  first operative was very helpful and considerate second operative basically called me a liar  so i just cancelled.

When you were with Plusnet were you getting a much faster download speed than you are now ?

Also, if you were experiencing slow speeds with them in the evening too this can sometimes be caused by noise on the phone network, in peak times when there is much more activity on the network the level of ambient background noise will increase, that can have an impact on your speeds. However I would agree that seeing a drop as significant as that would not be good news.

If you live in an area where broadband connections are very heavily utilised you could also be suffering from contention with other users during peak times, so the maximum available bandwidth is having to be shared out between more people.

@navek In an ideal world when speed boost it activated for you your connection speed should make a decent jump quickly, and I think for most people it does, but if for some reason your connection does not speed up then the best way to troubleshoot is to initially switch your router off for over 30 minutes, and then once rebooted leave it on 24/7 to allow DLM to make adjustments to your speed. My suggestion of 2 weeks was just because that tends to be the 'stabilisation period' for new connections, but I agree, as this is not a new connection, and as you could potentially just order the speed boost for 1 month you would really hope it would react faster, and I believe that normally DLM would react within a few days. But it really all depends if your speed issue was due to restrictions that DLM had put in place, or if there is some other reason why your connection can't support a faster speed.