wow, its been bad all day, but that is insanely low for fibre😮😡 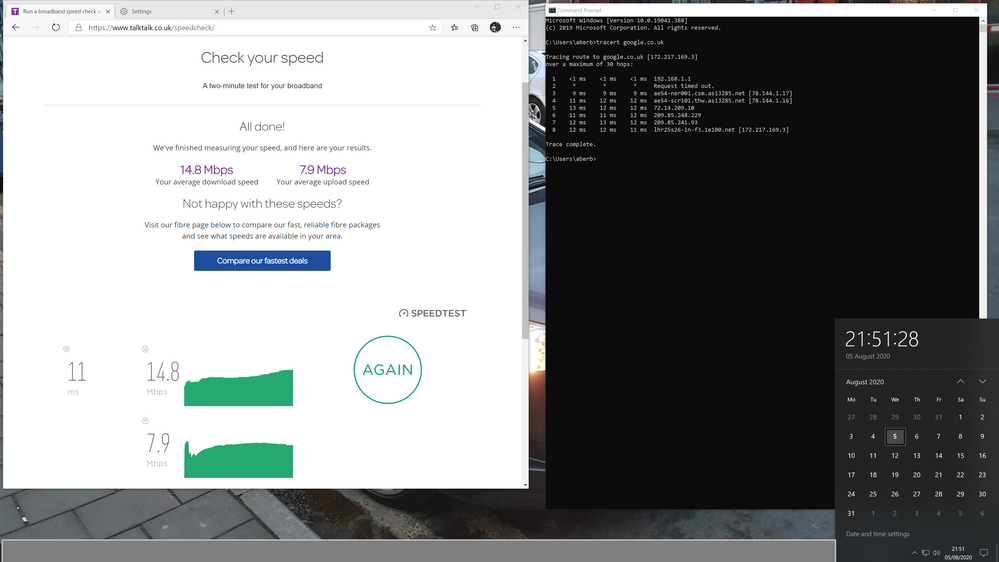 The engineer that visits will check directly.

it always says that, but looking at the graph over last week, apart from 2 days, its either on limit or lower, yesterday was worst so far, unlikely be internal as tried all i can think of, even shielded cables 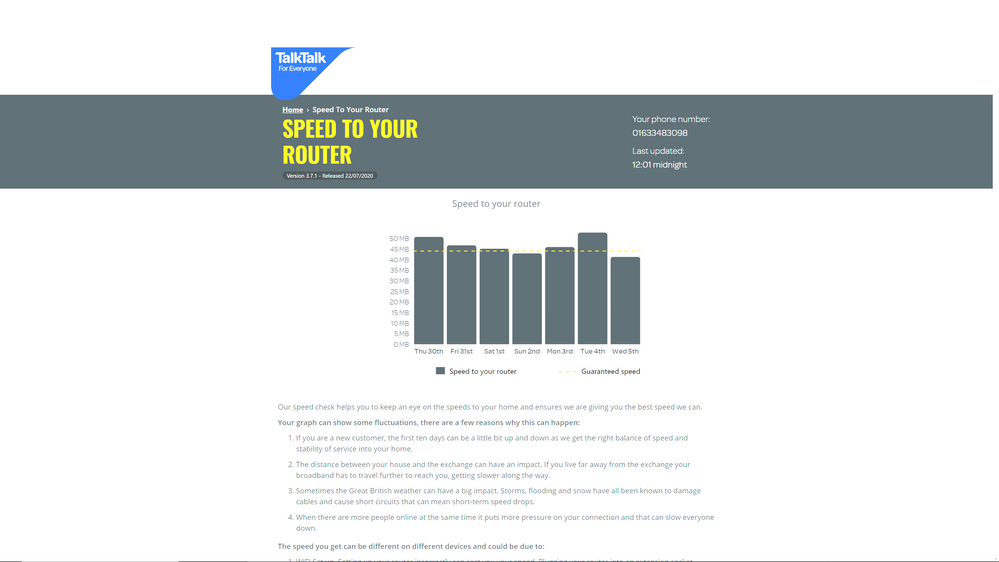 cant wait for engineer, this is plain ridiculous half speed on a sunday at 5pm

cant even get double figure upload and only 25mbs😫 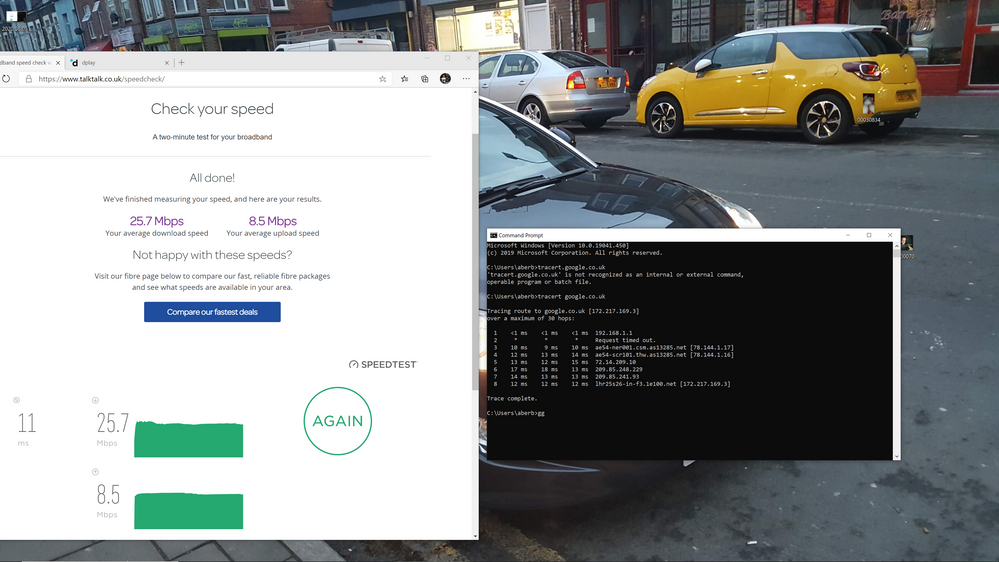 seriously getting beyond a joke now, single figures, joke of a company!!! 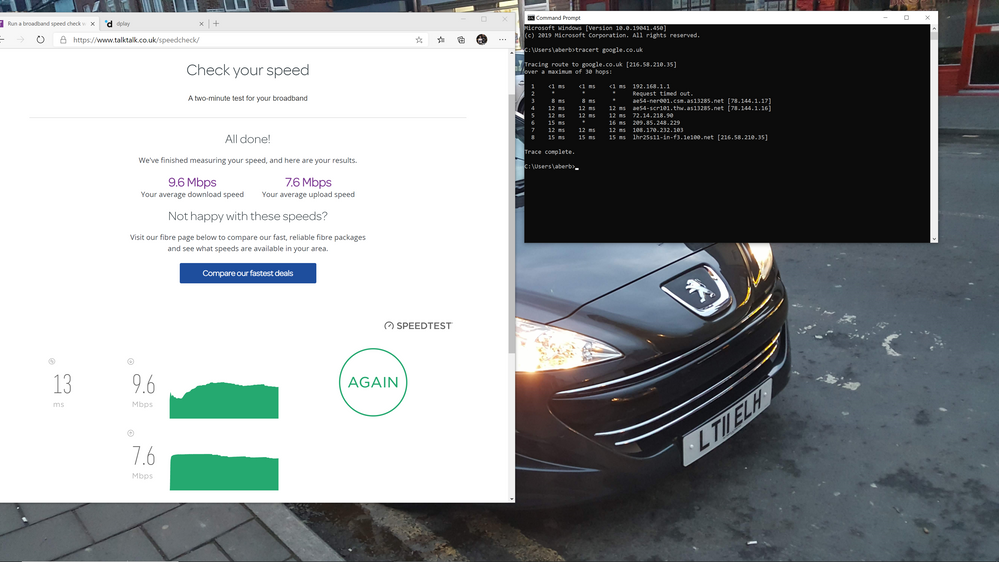 I'm sorry to hear this. The sync speed still looks consistent since we last checked. Please let us know how you get on following the engineer visit.

sadly was called into work today so rearranged for next weds, cant come soon enough tbh

tonight terrible as well, really dont understand this tbh now have cat 6 rj12 cable, incase other was faulty, though have a cable tester so was fine, but worth a try, so as far as inside there isnt any issues, and its always this tie at nighjt, you cant sell a product, but only say you only getting that speed while your in work, because at 8.30pm to 11.00pm speed goes through the floor, makes it nearly impossible to do anything, its actually worse than plusnets speeds. which didnt think was possible until lately 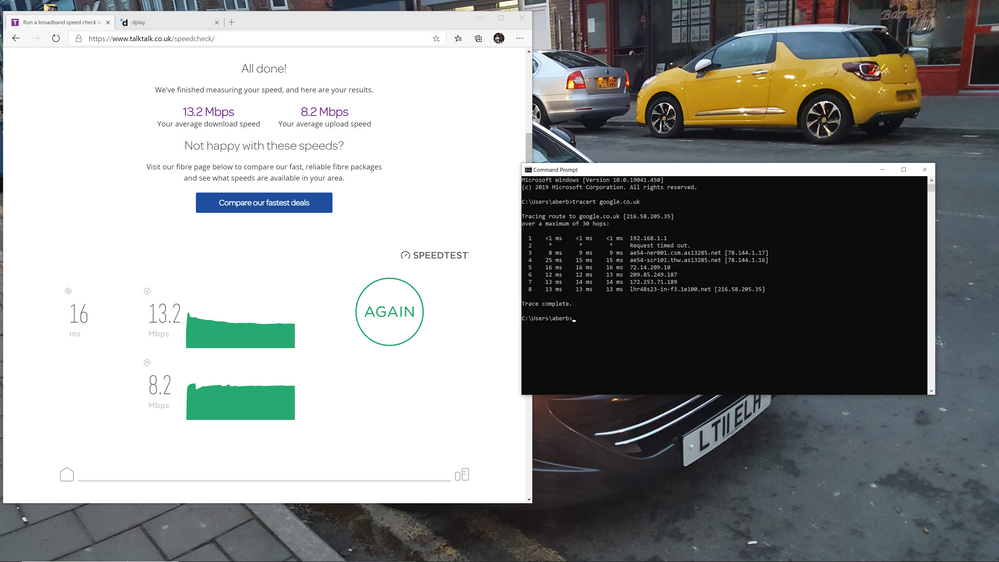 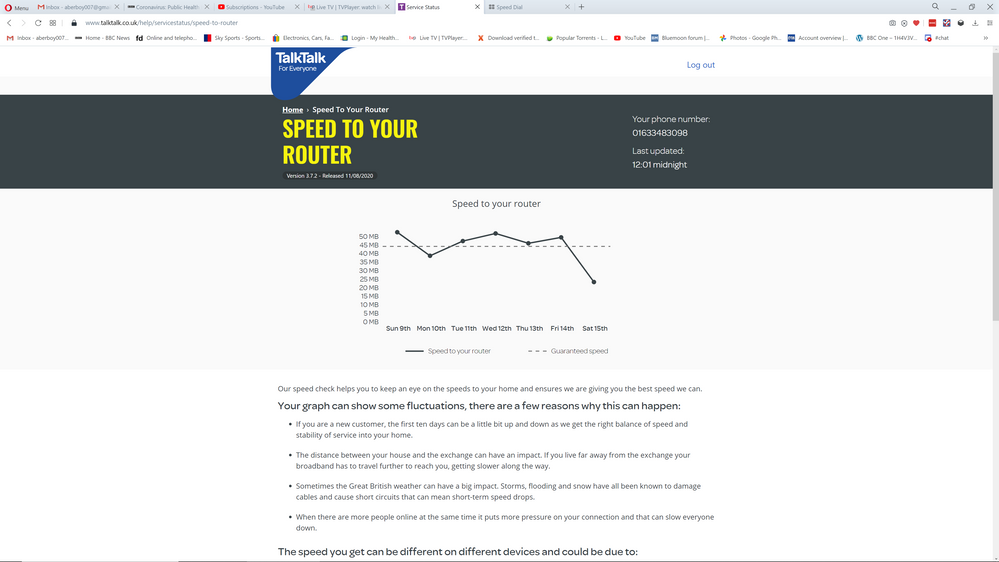 I'm sorry to hear that you needed to rearrange the visit, please let us know how you get on

well this is strange, suddenly my upload speed have gained 50% and my bandwidth cap has gone fro 53mbs to 61mbs, wondering if its because i fitted a cat6 cable with rj12 plugs and got rid of the one talktalk sent me. maybe was faulty cable? anyway i reset modem earlier for an hr and thats how it came back. will see how peak gets on

maybe a DLM reset might help? or is DLM an on going thing, maybe ask the engineer coming weds 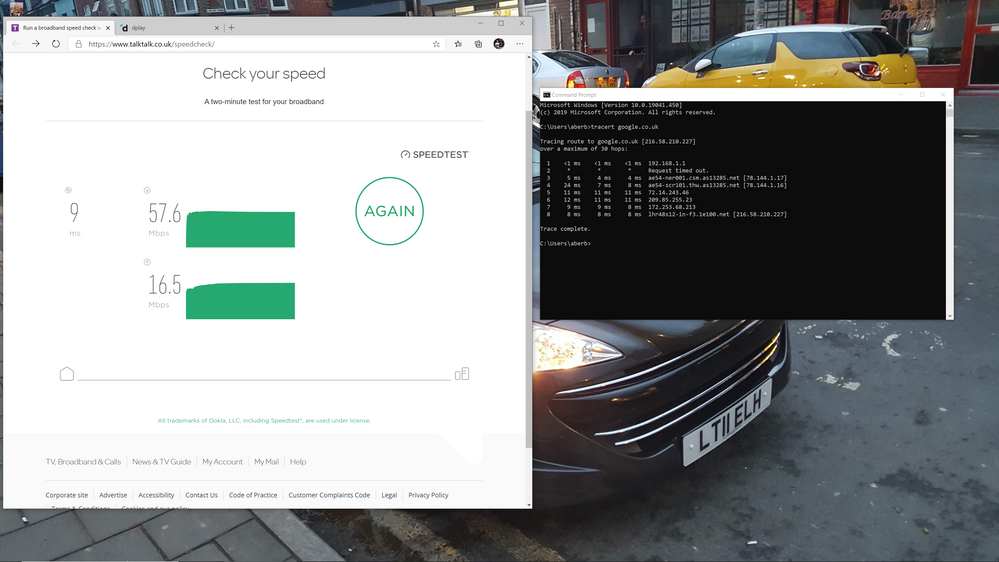 DLM is monitoring your connection constantly, but it will only make adjustments to your profile once a day (in the early hours of the morning). If the previous cable was a cause of errors or drops on your connection that had made DLM reduce your speed in the past, then if the new cable has reduced the errors or drops then DLM would start to increase your speed again, it normally takes DLM around 48 hours to start making adjustments.

If your connection drops and reconnects in the early hours of the morning then this may be an indication that DLM is making adjustments.
0 Likes
Report Inappropriate Content Reply

hmm interesting i did cable earlier, though turned router off for an hour first disconnecting every cable, then turned on, and left 10mins, then connected the new cable and the ethernet, then soon as router connected my speeds increased. if DLM doesnt get involved then, what causes the big increase? in upload speed especially. as before with talktalk modem cable i get max around 10.5mbs upload and download 50mbs at a max

One possible theory, this is based on my understanding of how things work, if my knowledge is out of date or wrong I'm sure someone can correct me !! ....

The main job of DLM is to specify a target Signal To Noise ratio (SNR) for your phone line. A fairly normal target might be 9db, so if DLM has set your line to have a target SNR of 9db then every time your router connects it will negotiate with the equipment in the street cabinet to connect at the maximum speed it can that ensures the broadband signal is 9db louder than the background noise on your line.

So if the old cable was causing a poorer quality 'noisier' connection, then the act of replacing it will give you a better, quieter line. This means then when you switch the router on it will still try to connect at a speed that gives a 9db noise margin, but as your line is quieter that will actually be a faster speed.

If DLM sees problems with your connection and it wants to try to stabilise your line it will increase the target SNR to a higher value (maybe 12db, then 15db etc), this forces your router to connect at a slower speed to ensure it can maintain the noise margin that DLM has specified. If a fault is resolved and your line become more stable then DLM will reduce your target SNR back down to the standard level. These adjustments DLM makes to the target SNR for your line only happen once a day in the early hours of the morning. For fibre connections DLM collects statistics about your line constantly, but only acts on them once a day.

my attenuation has also come down from 21.8 to 18.4. its a strange one, but a good strange one. just see how peak time goes around 9pm, fingers crossed 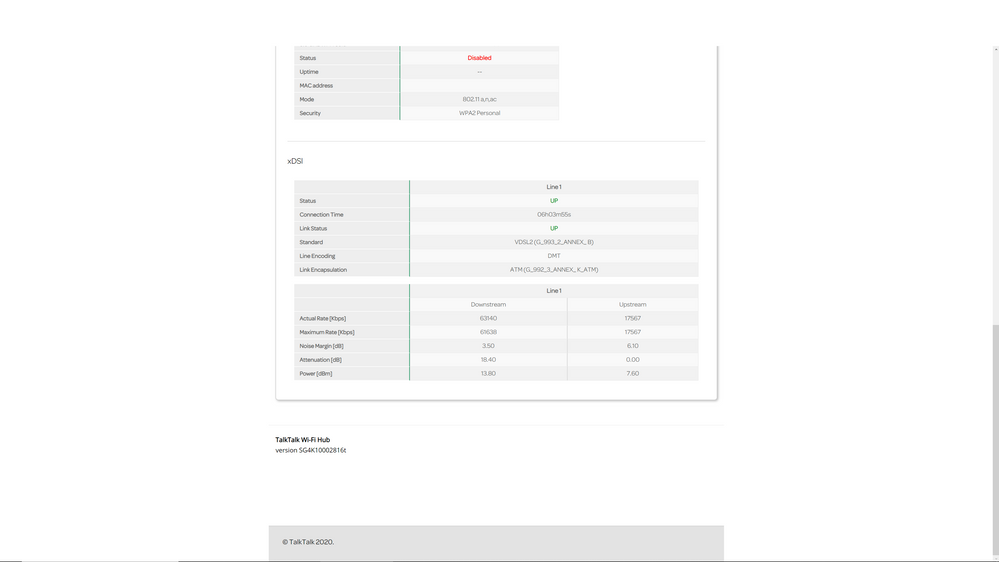 Yes, that is a pretty low downstream noise margin you have at present. I believe the standard 'targets' for BT is 6db, and for TalkTalk is 9db.

So if your noise margin has dropped then that probably explains the increase in speed, but with a noise margin that low you are more susceptible to line instability, as your broadband signal is only 3.5db louder than the background noise. You may find that changing the cable has just caused the numbers to jump around a bit, and over the coming days DLM might react to your change in cable and cause those numbers to move around a bit again !.
1 Like
Report Inappropriate Content Reply

DLM will use a lower noise margin for good lines close to the cabinet. 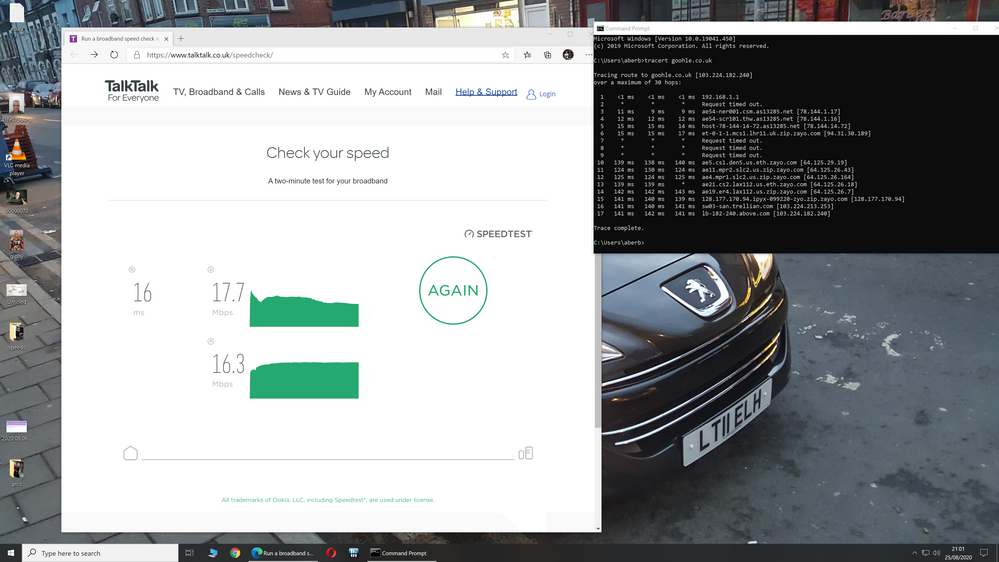 I was about to go live with talktalk , but the engineer didn't bother turning up, so I didn't. You might have the same luck.

well engineer turned up, but waste of time as he said, could see all was fine in here, showed him whats been going on especially at peak,showed him all the speed test/tracert pictures i snapped, and even he said theres something going on, so going to do a line test.

he said pointless coming. and talktalk had given him incorrect facts, said i had a set topbox, which i dont🤣

I'm really sorry to hear this. Are you still in contact with our CEO Tech Complaints Team?

yes i am, great customer service, shame i cant get word in edge way with him though🤣