Did anyone else received a "Fix your price" email the end of last month? (25th November in my case) 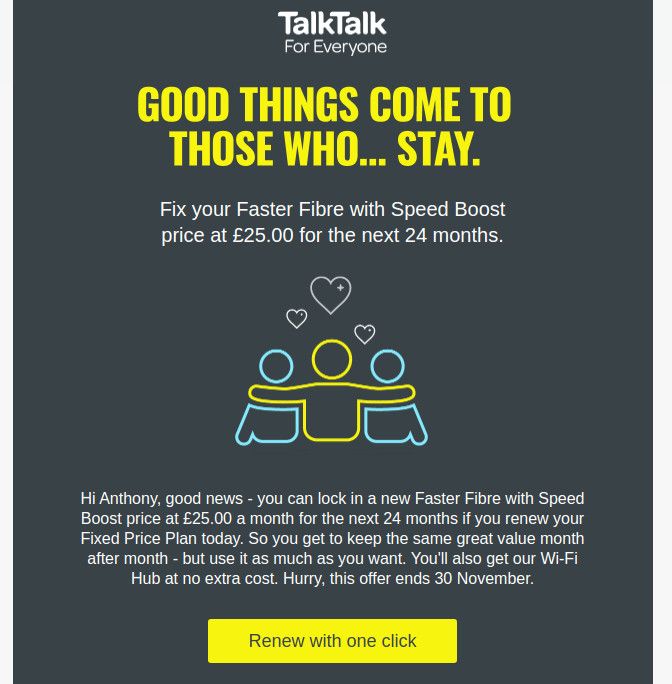 If so, assuming they took up the offer, has anyone heard any more about it? I clicked on the 28th (2 days before the offer ends), got the message below, but have heard nothing since then. Before anyone asks, I DID NOT click "Don't make any changes..." button! 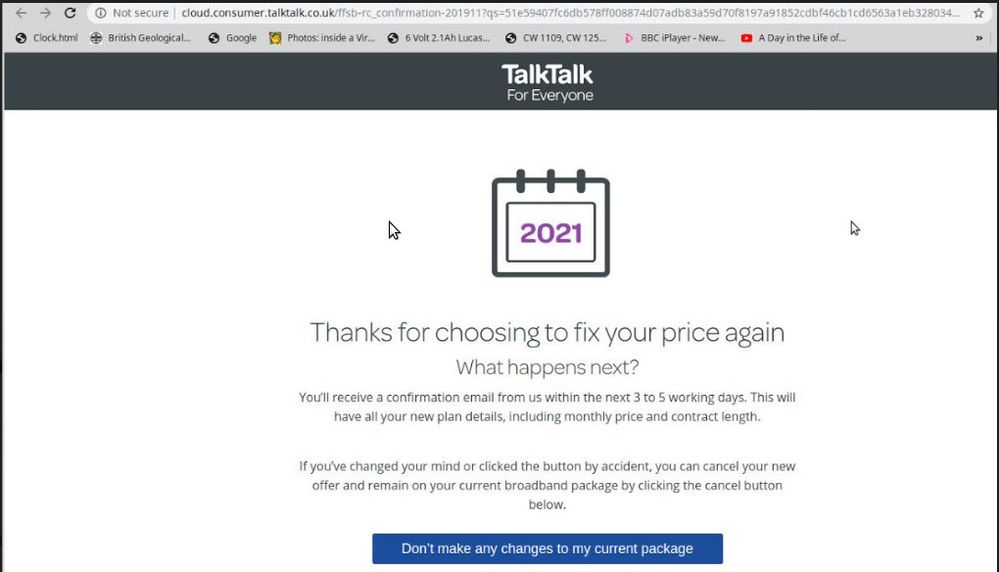 I've been scammed by TalkTalk with this exact email.

My Faster Fibre speed boost was removed I had it for at least 18 months perhaps longer.

I was told the reason for the boost being removed was because it was done automatically as it was not available in my area. I was told this was because they were unable to deliver the advertised speeds even though I had 20 mbit upload which was the advertised up speed. They can not add it back in anymore because of it not being available in my area.

No one would listen about the offer over the phone.

Two days ago the lady we spoke to was very rude over the phone at one point saying "Oh my gosh" not professional service.

We later found she removed the UK calls boost without our permission which I re-added now via the website at £5.00 a month. However I am still without the speed boost.

The best they could do was offer £5 off for the next three months so this deal yes I did not get the email in the time shown.

I do hope it was setup correctly for you but I would not trust TalkTalk to have done what was contracted.

I think resolver, ceo or ofcom will still hear from me about loosing the boost as they should not remove a service/s without permission to do so. Just because they deem it that the service isn't meeting what was advertised should not mean that it is then lost when account changes occur. They are oversubscribbing the area I used to have 63 mbit down which they keep dennying was ever delivered even though I have the modem stats to show this.


Why do they denny the evidence, they denny the deal now we are paying more than we were before it we were paying £22.50 a month until sometime in May 2020 and instead we will be paying I am told £17.95 for Jan-Mar 2020 then £22.95 after. I'm on an old school Tiscali mail account not impressed.
0 Likes
Report Inappropriate Content Reply
Highlighted

Frankly since the boost could not be included with the contracted package then shouldn't a different contract be offered?

If the contract isn't deliverable then why isn't a different one provided at a lower price?!


I really do hope they've not had the same problems but I thought it she be warned about so you know what to look out for.
0 Likes
Report Inappropriate Content Reply
Highlighted

I will check this out for you.

I'm waiting for a call already from the loyalty team as this is a breach of contract.
0 Likes
Report Inappropriate Content Reply
Highlighted

What did you find out? I never got the email too.
0 Likes
Report Inappropriate Content Reply
Highlighted

I got this email, but no confirmation and no Wi-Fi hub. I asked an OCE on this forum to check it out- I have received no confirmation, but they arranged for Wi-Fi hub to be sent. It all seems a bit dodgy, but so far free Wi-Fi hub, let’s see what next bill is!

I hope this isn't another offer which doesn't actually materialise!

Apologies there is a known issue that we have raised regarding the confirmation email not being generated. We are also in the process of fixing the contract end date to reflect 24 months instead of 18.

Sorry for any confusion caused.

Thanks - really appreciate it. 🙂