So 1 year on from having Faster Fibre 150 installed (23/03/20) and its been a troubled experience with inconsistent speed to my devices and drop-outs (live in a house of 3 including myself). When I had the Open Reach Engineer install this (I was one of lucky ones before strict lockdown last year), he confirmed I would get minimum 100mpbs speed (107 guaranteed from TalkTalk) and appeared to be flying off the mark.

Obviously then lockdown happened and with the majority of the country at home I attributed the inconsistent speed to the network being overloaded. The router is in the bedroom next to the openreach socket and an openreach modem. If using WiFi in this room the speed would average 70-85mpbs however the further away it would drop down to as low as 10mpbs if in my daughters room and the spare room (my work office).

Therefore I purchased a Tenda Nova Mesh system to create an additional network alongside the TalkTalk one. This DID help initially however I had issues with the main router dropping off. In reading some forum posts it recommended for me to turn off the TalkTalk main router WiFi and just have the Tenda Nova network so I did that a couple of weeks ago.

But even now I struggle with speed and drop-outs. 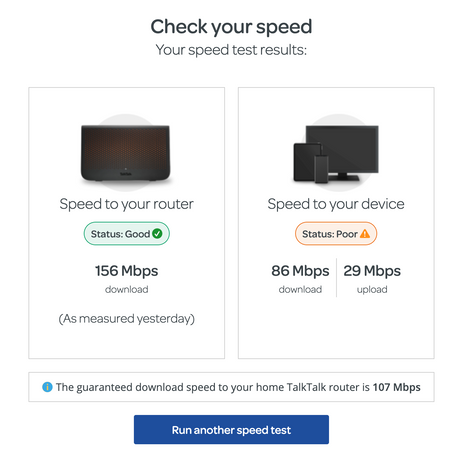 Using the diagnosis tools in my account and checking the speed I should be getting way above 107mbps guaranteed but consistently get lower than that. If using speed test on my mobile device (in same room) it gives less than half of what is quoted from TalkTalks diagnosis of speed. 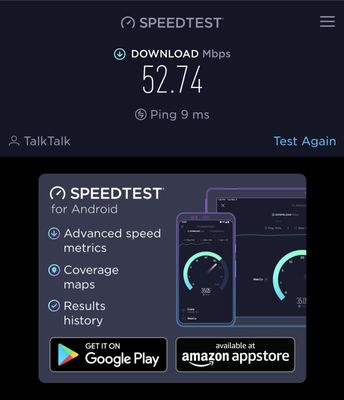 Not quite sure what to believe anymore. Any ideas? Appreciate if anyone can shed some light on this.

Pleased to say that the recommended changes to have 5Ghz and 2.4Ghz networks have made a difference.

I can see you've had some great advice from ste2014, look forward to hearing how you get on

See how it goes, let us know if you need any further help
Steve -
Have you tried turning it off and on again!
6 Likes
Reply
Options

Thanks for the recommendations @Ste_Nix14  👍

Will go round the house and switch some of the devices (Smart TV, laptop, PS5) to the 5GHz network and monitor for a few days.

Will update if good (fingers crossed) or bad 😎 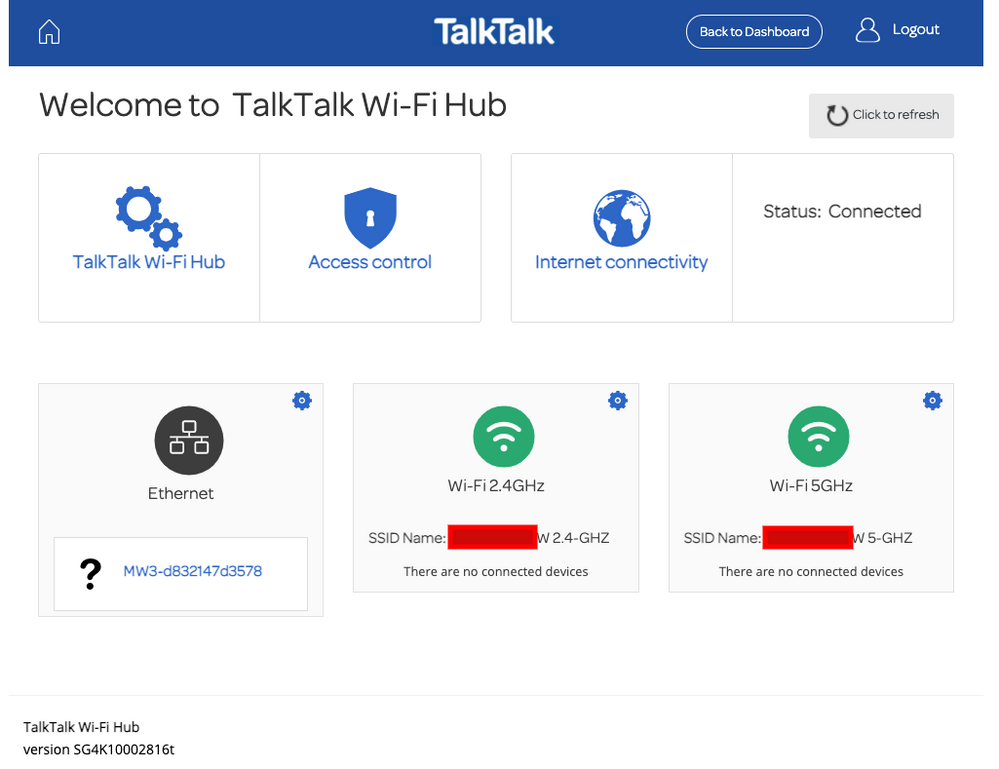 Please try my above suggestion. As you've said the router is not showing any connected devices on the 5G band which is why your suffering from low speeds. I personally use the 5G band for devices I know wont be to far away such as Set to box/TV/Console and that can take advantage of the better speeds. Other devices such as Kids tablets on 2.4Ghz as they will be in various rooms so need better coverage.
Steve -
Have you tried turning it off and on again!
2 Likes
Reply
Options

Any suggestion is helpful so will try this out Steve - Thank you.

Also FYI I posted screenshot of wired into router above

Just wired to router and this is the result (which is expected). 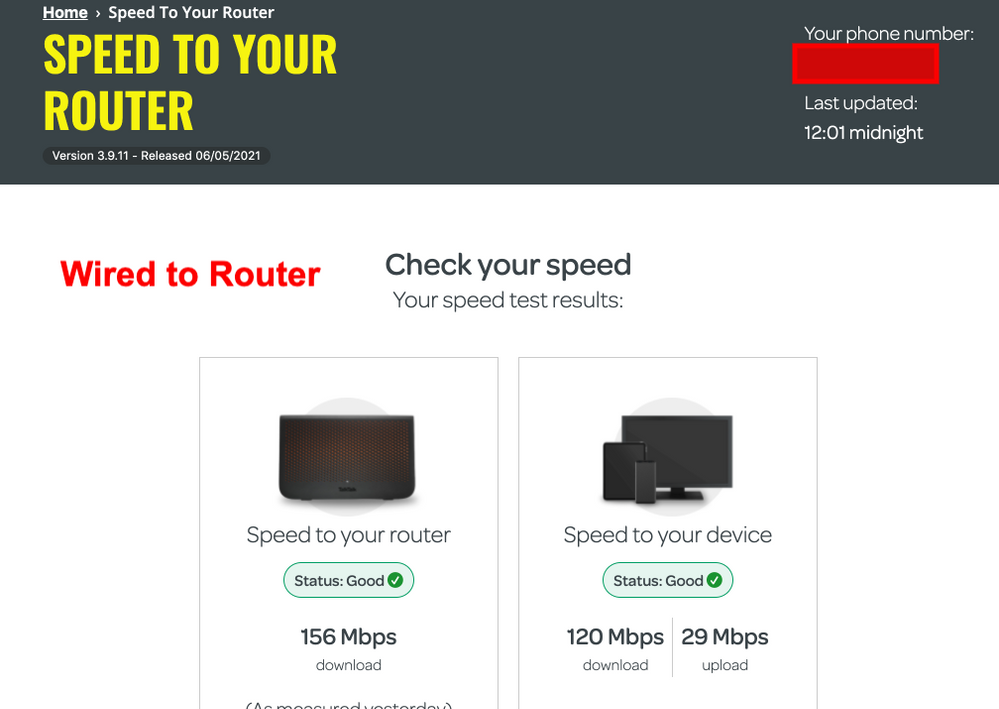 I would not expect this from other parts of the house and neither can I be plugged into router all the time as its in bedroom.

Any suggestions? Is there a better router option? Better mesh network system which works?

Message 9 of 16
Appolgies must of missed that bit,

By default most providers have 2.4 and 5Ghz bands the same name so devices can choose which to connect to depending on compatibiltiy, range etc. I take it as its not giving you the option to choose between that yours are still named the same, What I would do is seperate them by adding on '5G' on the end of the name for the 5Ghz band - This way you can force a device to connect to the network. 2.4 band will always show low speed test results is its the more congested band of the two.
Steve -
Have you tried turning it off and on again!
2 Likes
Reply
Options

Thanks for responding @Ste_Nix14 - My post was quite detailed (excuse it pls) but within it I mentioned I have changed both channels for 2.4Ghz (Band 1) and 5GHz (Band 2). If memory served me right for 2.4Ghz it was on Channel 6 (now on 7) and for 5Ghz it was on 36 which

Weirdly on 5Ghz I did see an auto option but nothing like that on 2.4Ghz?

However I am pretty sure network wise (forgetting the mesh network) that I should get options to connect to either Band i.e. 2.4Ghz or 5Ghz?

Just looking at the router config and it doesnt appear to have any devices connected to 5Ghz. Even the Mesh network says its connected to 2.4Ghz 🙄

Message 11 of 16
On all the screenshots of your speedtests, the 'Speed to your router' is consitently 150+ which may point towards it being a Wireless issue more then a Initial internet connection. Have you tried changing the channels on each Band (2.4Ghz & 5Ghz). Also what band are you connected to when completing a Speed test? 5Ghz will offer higher speeds but over a shorter range vs 2.4Ghz which will offer better range but lower speed.

Its been a few weeks in following this up. However my speed and drop-outs have taken a real bad turn and its quite unbearable now making remote working impossible (having to piggyback on my mobile data as its the only stable connection I have).

So now I am determined to get to the cause of this. Have started off with the self-serve troubleshooting service in running a speed test. In order to get better coverage for the drop-outs I purchased a Mesh Wifi Network system (Tenda Nova) which I mentioned in the initial post.

I have now reverted turning off the main router (which I mentioned in initial post) so back to having two WIFI networks (TalkTalk router and the Mesh Network).

See below speed tests screenshots taken when connected to the relevant WIFI network: 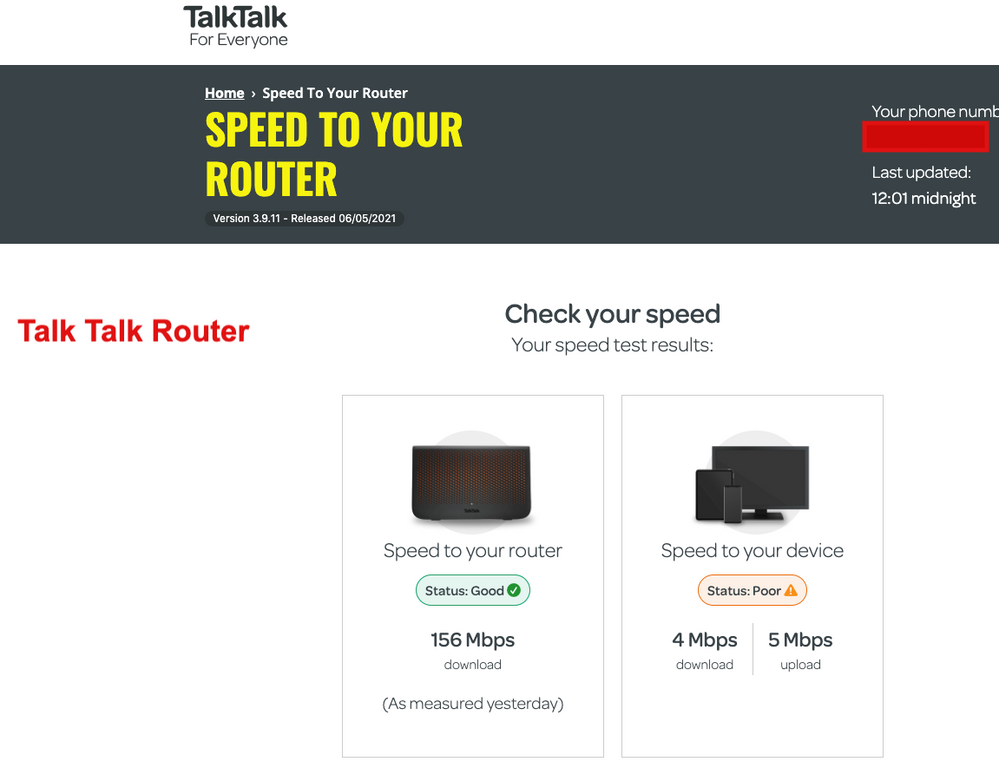 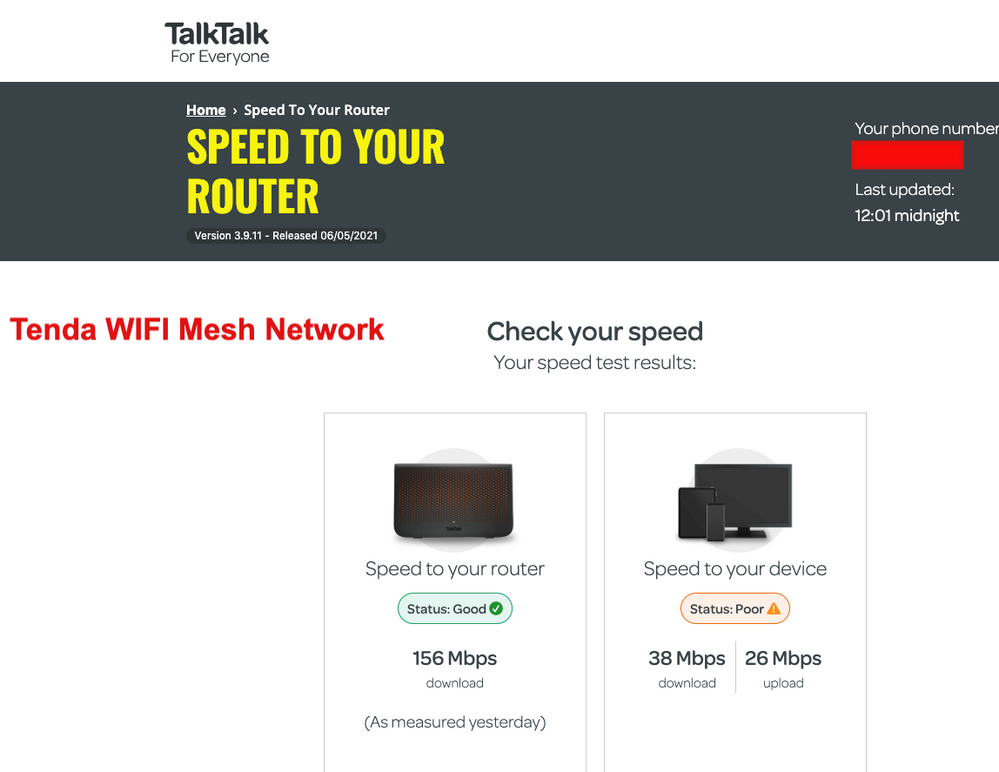 Even though the Mesh network has helped with better connectivity in areas of the house (away from the main Talktalk router) the performance is extremely inadequate when you compare the speed to what I should be getting. I dont expect to be hitting the the minimum guaranteed of 107Mbps (unless I am in same room as the router). However at least I should be getting 80+ on average IMO.

Please note that the setup of the router/open reach box/master-socket has not been touched since I had it installed March 2020 last year.

An to add, I have followed the troubleshooting guide all the way to the point it asked to changing the channel on the advanced settings for the router (I believe I have the Sagemcom router). I did look at a few posts in the forum which mentioned this router could also be a problem.

However I follow any recommendations on how to improve this. Help is seriously needed.

I've just run the test now and it passing with a sync speed of 160Mbps, how has it been since your last post?

Sorry for the delay in replying back. The issues I am experiencing are intermitted and today is a day where it seems to be a reoccurrence. As I type now I am tethering my mobile data to my laptop as the Fibre 150 connection is unstable. I have rebooted the WiFi 3 times and still not joy on a stable connection.

Can you please re-run the test?

I'm sorry to hear this. I've run a test on the line now which hasn't detected a fault, the connection looks stable and the sync speed also looks consistent. Do you have any devices connected wired so we can see how the speeds compare?