I also got invited to the Eero trial and then got the email Great news! You’ve been selected to join our exclusive free trial. Also clicked the link to say I still want to take part, got the Eero app and stayed logged in but heard nothing since.

An update. Full credit to the eero team for a speedy reaction.

Once again this issue has been escalated to the Manchester Escalation Team - who are brilliant and have helped me resolve many of the issues I had before the eero team surfaced.

So, they are doing the only thing they can - which is to check the lines (no fault), then request a line reset from OpenReach. Downside is that the guaranteed download speed is lower than I currently enjoy. Upside is that it may improve upload speed.

Many thanks to those who have helped to find a resolution and especially the Manchester team.

However, my warning still stands. TalkTalk have no control over upload speeds and don't guarantee them. Frankly that seems daft, particularly if the upload speed is sacrificed (speculation) by someone for some other purpose. A bit like our wonderful rail services that cancel stops to achieve route times!

For me, reliant on Apple with their focus on Cloud synchronisation through their products that is potentially a deal breaker.

And the fun continues. Every week my security system (also an Amazon owned company) reports that it is offline. Eero app always confirms it is online. The only solution is always to restart the eero network. I can almost live with that, now that I've learned how to deal with it.

I can almost live with the non response from the eero team to reports sent to them via the app (promise - we will respond within 24 hours). They are at least there if you are desperate enough, and have the time, for an online chat. Good people too.

My sincere advice to all. Do not enter into a trial with TalkTalk, and read the small print before renewing your broadband contract.

Today I noticed an issue with my desktop Mac. A ping test revealed a connection issue. It was resolved (ish) after I restarted the eero routers...but the slow internet upload speed appears to be interfering with my Mac's ability to do anything much. May be co-incidence, how would I know?

After an entire afternoon in 4 chat sessions with help - two simultaneously - it tuns out that my upload speed dropping (usually 20mbps, dropped to 8mbps....confirmed by the eero team as 7mbps from 6 August for no known reason) is of no interest to anyone. Eero team cannot check the lines with Openreach. Apparently upload speeds are not 'guaranteed' (as if a fast download serves any purpose if upload is faltering). Tech support are not allowed to check any line with an eero router attached.

Catch 22. Live with it sucker.

I had no way to contact the trial team until they threatened to cut me off. We have exchanged 4 or 5 emails today, but only because they just sow more confusion with each response.

They don't think their email was out of order. Noting the email actually states that it comes from OUTSIDE the TalkTalk Group Corp Network, I suggest that your bosses need to think a lot harder about how they run and monitor trials.

I didn't even know there was a Trials Team until I got the threat. I had no means of contacting them either. Your own call centre had no information and took the view that I was not in the trial. Responses via the eero app reporting system go unheeded. If it wasn't for the Technical Escalation Team in Manchester (who got involved to solve a line problem) saving the day this would have been an unforgivable experience.

The posts here suggest that the issues all come from the same root cause. Dreadful set-up of a commercial trial.

The trials team should have given an email address to contact them when you joined the trial, have you emailed them ?

I was a 'lucky' one and was selected. I started on 7 June and have shared maybe 10 reports (mostly major - to me- issues) and responded to the surveys, without receiving a single response until I telephoned the tech support escalation team, who have been brilliant. Somehow I have a working  system. However, I now have a threatening email from TalkTalk Trials team (first I have even heard of them) who want to cut me off because I'm not using the eero's! White boes with white lights must be a figment of my imagination then. Can't contact them the TalkTalk Trials team...Omnishambles?

The team have taken the feedback onboard for future trials.  The interest for this particular trial was overwhelming and there are only a limit number of spaces available.

So what was the response to this? Its been over a week.

feedback has ben given to the trials teams. 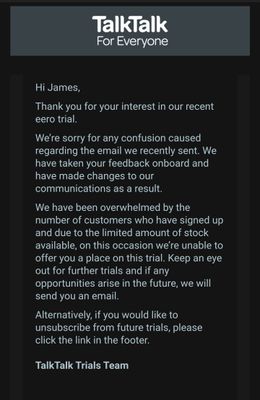 Very poor show talktalk! May I suggest that the Trials Team thoroughly review their processes for all future trials. Also, be sure to consult your Communications team before sending out future correspondence to customers. I am appalled by the Customer Service received during this debacle.

We are aware of this, and this has been flagged to the relevant teams.

The Team will reach out to customers directly in due course.

Thank you for reporting this to the Trials Team,

When can we expect a response to this?

Same here, accepted on the 10th of May, then yesterday another email says that i was not accepted.

Also they are trying to put all the responsibility to Amazon. This is not an Amazon issue.

I'm sorry to hear that and I have fed this back to the Trials Team.

i was also excepted for the trial and clicked the link.

Then sent another email saying  have not been excepted

was looking forward to the trial

I'm sorry to hear this and I will feed this back now.

@OCE_Karl please can we get a response to this,

Thank you for your help in advance.

As you can see from some of the recent posts in this thread, a few of us were accepted for the trial and then received emails stating we had not been successful.

I started a different post here before being pointed to the responses in this thread: https://community.talktalk.co.uk/t5/Broadband/Accepted-on-eero-mesh-wifi-trial-only-to-be-told-I-won...

As you have contact with the manager looking after the trial, could you ask them to investigate the situation and clarify why this was miscommunicated? There seem to be a few unhappy customers as a result of this mistake and I am sure talktalk will be keen to look into why this happened and rectify accordingly.

Was accepted for the trial on 10/05/2021 and clicked on the link to say was still interested.

Today received an email saying Ive not been accepted??? What is going on?

You just need a Tenda SG105 5-Port Gigabit Desktop Ethernet Switch £9.09 on Amazon. Just plug the eero into it and then you have 4 ports you can use. Just needs another plug socket. Remember to use Cat5e or preferably Cat6 ethernet cables.