Having enjoyed a stable 14000 kbps ADSL2+ connection for a number of years, we opted upon renewal, an upgrade to the Fibre 35 plan, going live (after some problems due to OpenReach) , on 19/3/2018

Delivered sync speed was better than expected at 39800/9900 kbps and this was pretty stable mostly exceeding 35000 kbps.

On 15/2/2021 upon contract renewal, we upgraded to Fibre 65 plan. This was initially disappointing as I expected a larger speed bump, given that OpenReach previously said we had a particularly good copper connection.

The guaranteed sync speed in my welcome letter was 48000 kbps but we were initially getting below that at 45415/10769 kbps. This later increased to a max recorded sync speed of 52800/12986 kbps presumably after DLM had done its work.

More recently, the sync speed has fallen and is now well below my guaranteed sync speed, today it is 34999/8496 kbps and seems to have stabilised at those rates (DLM?) Normally I see zero packets errored or dropped on either ethernet LAN or WAN side BTW.

Since 2018, I have been using an HG635, which I had previously acquired, rather than the TT supplied HG633 because of its better ethernet & WAN performance. Recently, I experienced repeated uncommanded factory resets with it and had to resort to using the HG633 - these events might have triggered a DLM sync speed downgrade? Both HG’s are at latest firmware revision.

Given that TalkTalk is a signatory to Ofcom's voluntary Broadband Speed Code of Conduct, I would like to have my connection investigated under the terms of that agreement.

I am painfully aware that I am now paying more but getting less than when I was on my original Fibre 35 plan. I hope that an OCE will pick up on my issue.

You can return the old router in the returns bag 🙂

It certainly has solved the speed issue quite dramatically!

Does that mean I now have to return the HG633 in the grey bag? - I will not be shedding any tears over that, might even hold a party to celebrate,  now we can legally do that! 😇

Hello Karl, I think you have misunderstood me - the HG8043 mentioned is a loan router which Michelle organised for me to test out whether or not a newer router would improve performance over that of the issued HG633. I was therefore asking if I could upgrade to the HG8043 not from it!

The HG8043 router was supplied with a returns bag , to return it in a couple of weeks.

The HG8043 is one of the latest routers we provide so we would not really offer an upgrade from this.  Also, when additional routers are supplied, our teams do provide a returns bag for return of the old router.

Had an idea - I have now repurposed the old HG635 router with everything aboard except ethernet disabled, as a NAS server - it is working better than before & may fit the bill and so I want to ask if it is true,  as some posts elsewhere have suggested,  that TT offer a router upgrade for existing customers, for a modest fee?

If so,  it might not be necessary for me to consider buying a 3rd party router even though the DG8041W does not meet my specific requirement for a USB port.

Can you please tell me what my options are re router upgrade or not, as the case may be?

PS I am very impressed with both DSL speed and WiFi coverage of the DG8041W router and my sync speeds have increased again,  after another early morning DSL drop and reconnection event. 😺

Instant increase in speed from the DG8041W router 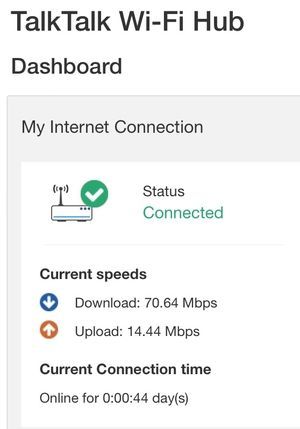 That will do nicely, it proves that the HG633 router has far less efficient DSL, now getting a measured Ookla throughput of 67Mbps/14Mbps...

Downside is that I did not read the spec of the DG8041W router and assumed that it has a USB port for storage which neither it or its' Sagemcom sibling possess. Working on using my old HG635 as a NAS server as a workaround.

In that case, I will leave the DG8041W in place for a week and see if DLM increases the line speed - downstream SNR is currently 6.7dB so may be room for improvement. In long term, I will have to consider a good third party router with a USB port , DrayTek comes to mind.

Thanks for the update and please let us know how you get on. It would be ok to keep hold of the router for a few weeks whilst you are testing the connection/set up.

I'm Impressed! router arrived today and is now configured but not connected.

I will wait till tomorrow to switch routers , giving DLM time to avoid too many resets and risking line speed downgrades.

Call you back once we have tested and left it running for a while - when do you want the router back by please ?

Would you like me to send a Huawei WIFI hub for testing?

The connection has actually improved over the weekend, and is stable at 13505/57544 kbps sync speed and is noticeably faster in use.

We also think that the clarity of the voice calls has improved. Zero dropped WAN packets or errors recorded.

Although this is all good, I and the OpenReach engineer think that there is still room for improvement.

He is of the opinion that the unlovely HG633 is losing us some 10mbps , probably because of its poor (firewall?) performance.

Using his test equipment directly on the line, he was able to get a sync speed of 63 Mbps.

I am reluctant to put back the better performing HG635 router, in case it still triggers repeated DSL disconnects, leading to another DLM downgrade.

Is it possible to borrow one of your latest routers to see if that can make an improvement, please, versus the HG633?

Glad the engineer identified and resolved an issue.

Lets see how the connection behaves over the weekend.

Engineer came first thing and quickly diagnosed issue with capacitor in the ancient LJU and has replaced it with a NTE4C socket. Physical line is good.

We now have an OOkla  measured 50mbps/12mbps connection which might improve after DLM responds. Much faster and more responsive than before.

Engineer is of opinion that the HG633 is losing us some 10mbps as the maximum downstream rate possible shown on his equipment is much higher.

Quite impressed with the efficiency of OpenReach engineer.

He asked me to monitor connection which I would be doing anyway.