Fibre 65 or retro fibre that is the question

I thought I posted this earlier today but somehow it is not showing so I have had to rewrite it.

When I extended my phone and broadband contract in April 2022 I was given a guaranteed Fibre speed of 72mbps which is clearly stated  in the contract extension letter. Yesterday I was told by Talk Talk tech support that the guaranteed minimum speed for my connection is only 16mbps and the speed details in the letter was an error. I extended and accepted Fibre 65 and today they said that I was told of the 16mbps minimum guaranteed speed during the phone call.  I can't say if that is true but I remember saying that Fibre 65 was plenty fast for my needs.  The speed difference is enormous.  It also means that I will be wasting my time reporting a slow speed problem if it's 16mbps or higher.

I checked my emails and found the contract extension letter. This is an extract from the letter, under Very Important Information:
"You can look forward to an estimated download speed between 79.0Mbps and 80.0Mbps with a minimum guaranteed speed of 72.0Mbps".

Since I first moved to Fibre and later Faster Fibre a few years ago. My speed has regularly achieved late 60s and early 70mbps some of the increase was due to the better router. Since extending my contract in April to Fibre 65 my speed has been between 51 and 56mbps, which was acceptable, but in the past week has slowed dramatically and was between 13-14mbps and has gradually increased to 15mbps.

When I spoke to Technical Support a couple of days ago, they said the guaranteed minimum speed is 16mbps and the speed stated in the contract extension letter was an error. Before I had Fibre broadband I think my speed was 9mbps so getting Fibre speeds was a transformation. Why are achievable speeds (according to Talk Talk) much slower than they used to be. Talk Talk is going backwards despite technology improvements.

Please explain how I can achieve the speeds I have been used to and was promised when I extended my contract when Talk Talk technicians believe the minimum guaranteed speed is only 16mbps. I have powered down the router for more than 35 minutes but this has made little difference to the speed as has connecting the router to the Openreach master socket. The highest I can achieve is 15.0 mbps.  Not earth shattering speeds.

An Openreach Engineer is attending and I will report his findings as soon as I have the time and a better connection..  The problem posting is due to Tags.

Maybe this helps but I'm surprised nobody has pointed out your upload speed is way down on what you should expect, which is about a quarter of your download speed. Here are some of mine for comparison.

The minimum guaranteed speed shown when I check my connection is 16mbps. The latest speeds are shown in this message. 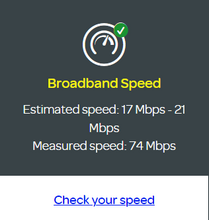 The average speed quoted on this test is only 17-21mbps which is in line with the 16mb guaranteed speed but a long way from the measured speed to the router. The achieved speeds to my devices are consistently 64/65mbps.  The TT staff tell me the guaranteed speed is only 16mbps and they can't change it.  Three other providers  (BT, Zen Plusnet) who also use the Openreach network quote guaranteed speeds of between 55 and 69mbps. Even a quote from the Talk Talk website yesterday, posted just before your message, quotes a guaranteed speed of 55mbps.  All of this I have posted to Talk Talk either here or in a private message.

The odd and unexplained guaranteed speed is the very low 16mbps.

Getting an accurate and realistic guaranteed speed is very important if the provider is unable to meet their obligations and provide a decent service. I really don't know why they can't speak to Openreach about the disparity.

I wonder if anyone else on Fibre 65 has a guaranteed speed as low as mine or under 20mb.

The minimum contractual speed limit is always displayed there.

Note for Info : I at one time had fibre 35 and my minimum quoted speed was 21Mbps

I just used my details to get a quote for Fibre with Talk Talk and the details are shown in the screen snip below.

"We guarantee you a minimum download speed of 55.1Mb/s"

this is a long way from the 16.7mbps minimum speed you still insist is the speed shown for my account. 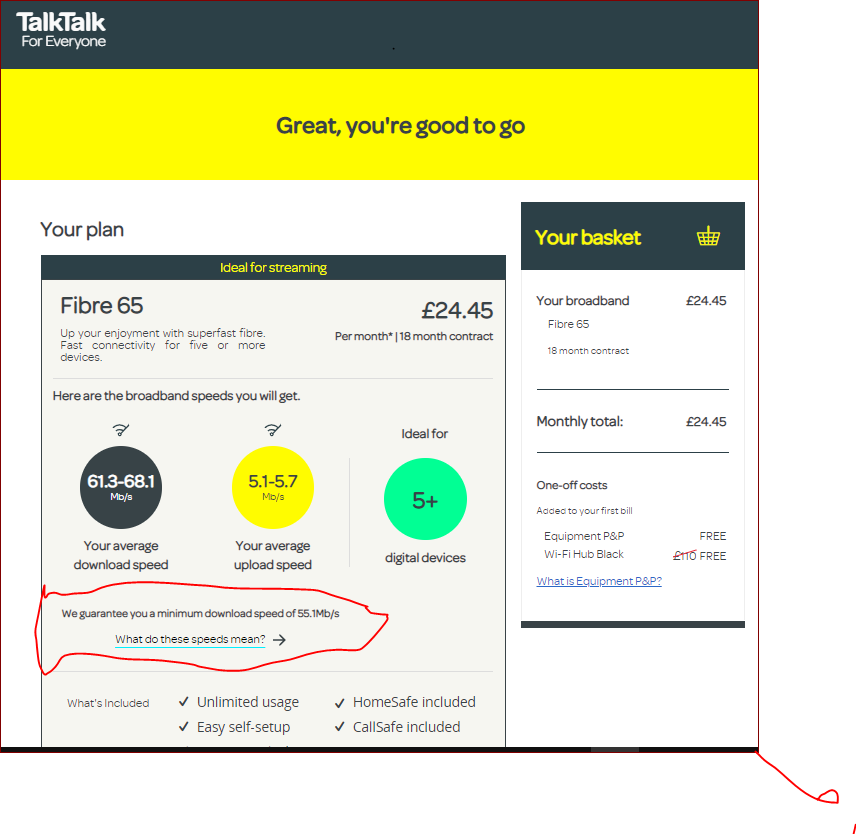 The above quote today from the Talk Talk website also shows a much higher guaranteed speed for my line, the same as BT quoted and a bit lower than Plusnet and the Zen speeds of 69mbps.

As a long standing customer I don't think it's unreasonable to ask you to investigate  why the very low guaranteed speed applies to my account yet three other Fibre providers, using the same Openreach network, guarantee

I've replied to your PM

From the first post in this thread I said:

"When I extended my phone and broadband contract in April 2022 I was given a guaranteed Fibre speed of 72mbps which is clearly stated in the contract extension letter".  By continuing to show the guaranteed speed at 16.7 mbps  you are trying to weasel out of your obligations. If I have a low speed over 17mbps you will tell me that is more than the guaranteed speed.

You have not mentioned the fact that other Fibre providers guarantee a much higher speed using the same Openreach system.

We'd only be able to raise this as a fault if the current sync speed was actually low. If the speeds did drop then we can definitely investigate this here for you.

Openreach told me that the 16mbps speed is way too slow as they consistently get 70-80 when they check the line.  Are you connecting right or is there something that is wrong with the connection to Openreach.

I checked two other phone and broadband companies this afternoon and the results are interesting. 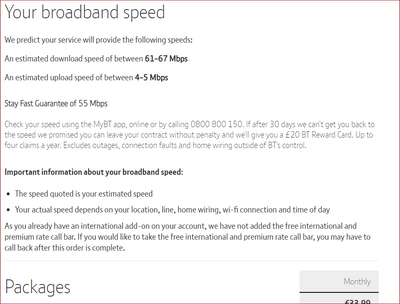 Both use Openreach as does Talk Talk so why are they guaranteeing a speed close to the speeds I would accept and a long way above your guaranteed speed of 16mbps. This is also in line with the figures stated by Openreach.

Please escalate this to the technical department to investigate.

I can see my colleague Chris also confirmed previously that the the minimum guaranteed speed showing on our systems is 16.7Mbps

I'm not sure why this is so different to your sync speed. This information is provided to us by Openreach.

I posted on here because I wanted to find out why the TT call centre and technical staff told me the minimum guaranteed speed  was only 16mbps when my contract extension letter stated a much higher speed and I had been achieving speeds very much higher than that. The snips below and the tests from my laptop posted in the past two days demonstrate that as does previous speed tests.

I would like you or someone else to explain why the minimum guaranteed speed is so much lower then the actual speeds achieved.  The actual speed to my laptop is 64/65 mbps. The connection speed from the router dashboard is 74mbps. Taking all that evidence into consideration, including proximity to the street fibre cabinet, explain why Talk Talk can only guaranteed a speed 58mbps less than that. 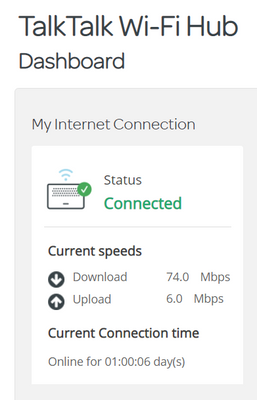 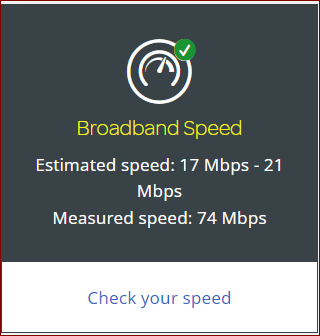 On the Broadband Speed snip the measured speed is 74 mbps  but the Estimated Speed is only 17 - 21 mbps.  How can the estimate be so wildly wrong.

The Openreach engineer told me that is more like ADSL speeds and you must have something wrong to estimate speeds like that when my line is capable of 70-80 mbps..

I'm glad to hear this. I'm not sure why it is showing this as the current speeds are much higher. Please let us know if the speeds do drop.

I have been using my laptop all afternoon and the connection is stable. Also, the speed is just fine as demonstrated by the speed tests results posted above.

So, why does Talk Talk only guarantee a very low speed of 16mbps.  It does not make sense to me.

Thank you. The speed test results look ok based upon the current sync speed. How is the overall performance of the connection at the moment?

I powered down the router, went for a walk & returned 35+ minutes later and carried several wired speed tests in Talk Talk. 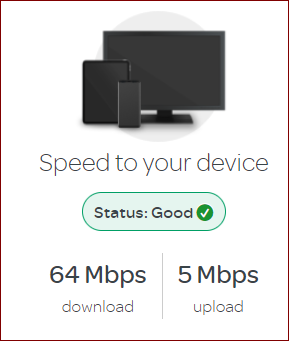 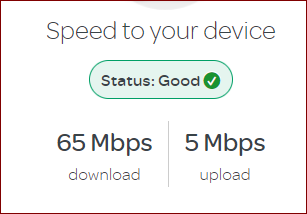 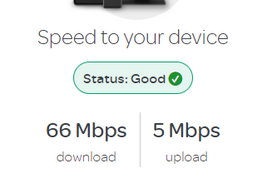 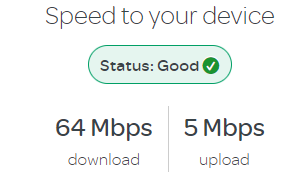 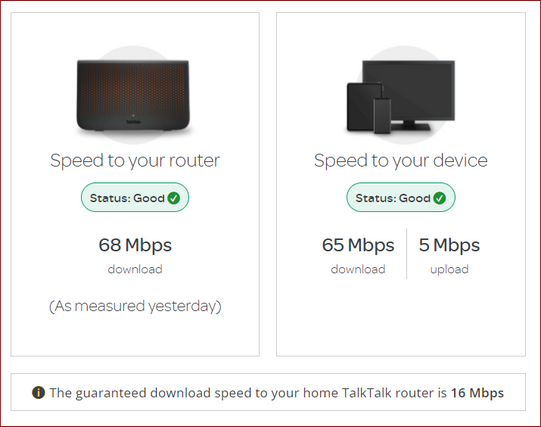 Thanks for the update. Could you power down the router for a full 30 minutes and then run a wired speed test using the TalkTalk Speed Tester so we can see your results please.

I have connected the new router this afternoon. All seems well with the connection and the speeds are as I expected.

My Internet Connection  from the Router page. 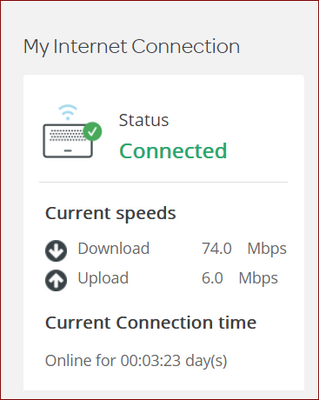 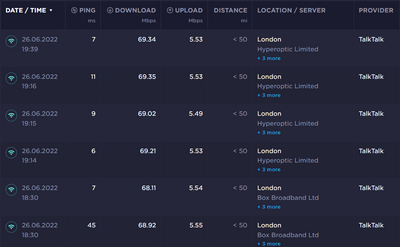 This is why a guaranteed speed of 16mbps is ridiculous.  This level of guarantee is just a cop out and demonstrates your lack of confidence inn your systems and Fibre 65. 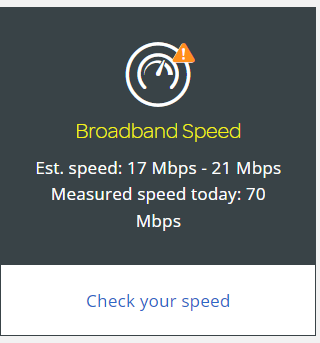 What does the warning triangle mean in the broadband speed snip above.

The picture shows how close my home is to the Fibre cabinet so it rules that out as a reason why my connection speed is poor.  I would like Talk Talk to acknowledge that and not use distance to cabinet as an excuse for poor speeds in the future.  The new router will hopefully rule out another cause when it's connected.  After that I expect you to guarantee the speeds quoted in the contract extension letter and not the pathetic 16mbps quoted by Talk Talk support staff when my speed plummeted to 13-15mbps around the 12th June 2022.

I will leave the photo in the post until I'm happy with the result of my complaint.

Ah I'm sorry to hear this and I hope you feel better soon. No problem and please let us know if there is no change with the replacement router. It's not possible to add an image to your community profile, would you like me to remove this for you?

Because I have been unwell for the best part of a week I haven't connected the new router. I hope to connect it in the next day or so then I will report back on the speed and the stability of the connection.

I have attached a snip of the street view and you can see how close my home is to the green Fibre cabinet in the street. Because of the proximity to the cabinet my speed should be very good. The Openreach engineer said I shouldn't have any difficulty getting the speeds mentioned in my contract extension letter -70 - 80 mbps with a guaranteed speed of 73mbps, I was getting early 70s  last year and achieving 56/57 mbps this year until the fault reduced the speed drastically to 13-14mbps.

This image shows the Fibre cabinet (circled in red) and my home is marked by the red asterisk.  I would rather this image was added to my profile, rather than posting it to the Community but I can't find a way of doing that.

This is speed test results from last week. The high speeds were achieved after the Openreach fixed the fault. 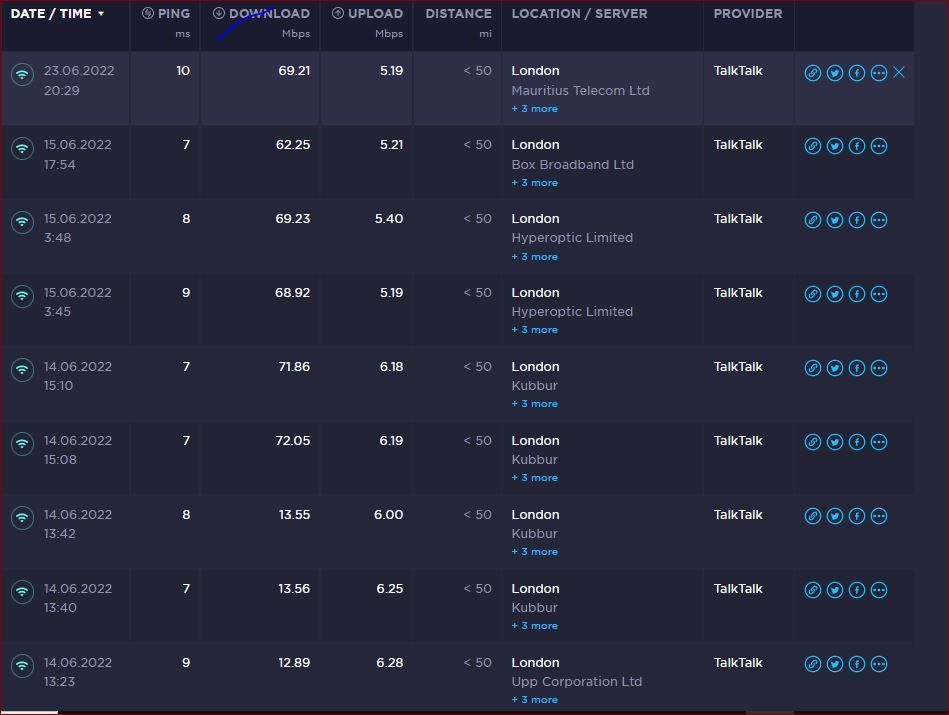 Ok thanks for the update and please let us know how you get on.