Since transferring to fibre 65 from my previous package I've been unable to get the guaranteed speed and I'm constantly getting a 'no internet connection' message on my laptop & other devices.

Running speed tests always results in a 'poor' result as shown below, this was this mornings, I've had to reboot my router twice already today with no improvement in bandwidth. 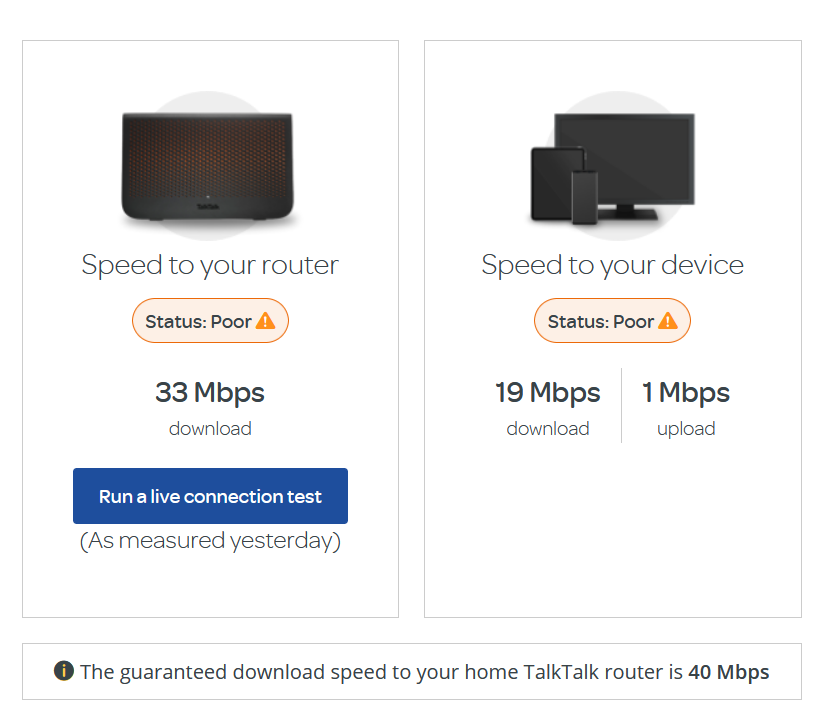 I am really sorry that we weren't able to increase the speed any further. At least we know why now since Openreach have confirmed that the line speed capability has been changed.

If there is anything else that we can do to help then please let us know.

Thanks Debbie, this community forum is one of the reasons I'm loathe to leave TT, you've all been so understanding and helpful over the years, this is the first time you all haven't been able to resolve a problem for me.

I have credited back the engineer charge now. I have also added full notes to advise that the line speed capability has been changed by Openreach.

Apologies that this has been ongoing.

Hi Debbie, yes the engineer charge is on our bill. Are you able to out a note on our account to the effect that we are having to change down not through our own choice? Thanks.

Chat is also now allowed to sort out package issues:

Opening hours are also detailed on there.

Just be very careful to tell them that you have been told by Talktalk staff to change down to Fibre35 as your line cannot support the Fibre65 speeds.

Normally there's an admin fee for a change of package mid contract, and you are past the first 30 days of this set up. Get them to actually say that they are waiving that fee, for the record.

From looking into this further we have now been advised that the line speed capability has been changed by Openreach.

The only option available now would be to downgrade to Fibre 35, apologies for this.

If you contact our Loyalty Team then they can look at this for you. I will arrange for the engineer charge to be waived. Does this show on your current bill?

Got the bags this morning thanks. What are TT going to do about this engineer charge? They could not find any fault on either visit, the router is less than 500 mm from the master socket, there are no extension leads or phone extensions, the first engineer stated that we shouldn't have changed the router when the speed was low (TT instructions was to do so) the second engineer could find nothing wrong until the Segemcom Router was plugged in WITH NOTHING ELSE CONNECTED to it, so that leaves only either the router ( two faulty routers??) or the router cable, which is new. Neither of these issues can be down to us. I also hope that there will be no charge for the second engineer visit which I strongly objected to (as you can see from this discussion previously) as I predicted it was a waste of the engineers and my time, but your colleague insisted it go ahead.

About a week ago one of your colleagues stated "I don't know what else we can do" and given that TT are the only ISP willing to 'guarantee' a speed in excess of 33-35 Mbps makes me think I've been sold a contract which just isn't achievable. We are as I've stated before over one km from the nearest fibre cabinet I think the last Openreach engineer estimated the run at 1.5 km.

So it does seem to me that the speeds quoted on the service dashboard (41 - 51 Mbps) are pie in the sky.

So where do we go from here? I'm loath to leave TT as I've been a customer both here and in a previous address for probably around 17 years, but I feel that there are two issues which need addressed: 1. the engineers charge & 2. it's now well over 30 days we've gone without the guaranteed speed.

I'm really sorry about this.

Can I just check, have you received returns bags for the Sagemcom routers?

Can you please explain why Talk Talk have charged me £65 for an engineer visit on the 30th September? The engineer did not find a fault in our home and we still have the same fault despite having tried several routers. It was Talk Talk who TWICE insisted on an engineer visit despite my telling you they'd find no fault with anything we've done. TWICE an engineer has left telling us it's your equipment which is faulty.

Given that we have not had the service which Talk Talk have guaranteed since the day we signed up to Fibre 65 it's you who should be reimbursing me. I will NOT be paying this and will take this to OFCOM if you try to enforce this outrageous charge.

I have 3 Sagemcom routers & the original HG633 cluttering up my house, no sign of a replacement Huawei.

This issue was raised on the 18th of September it's now 21st October I think you've had your 30 days?

EDIT: since I replied I've been looking at other ISP's and not one are promising more than the speed I'm currently getting, should we now be talking about mis-selling? It's the same cabinet, same wires, same distances after all. Over to you.

I'm really sorry about this. I've ordered 3 returns bags. If you could send the routers back and I'll then try to get an Huawei router out to you

This morning I received TWO routers both Sagemcom not Huawei. I also now have 3 routers here but with no bags or return labels, can you send some out please.

I've ordered the router, it should be with you within a couple of working days but please allow up to 5 working days for delivery

May as well try it, thanks

I can send you an Huawei hub to test with to see if it will sync at a higher speed, would you like me to arrange this?

I think the original Router was a Huawei HG633,  but that wasn't giving us a stable connection.

Thanks for the update. If the engineer can't improve the speed then I'm not sure what else we can do. Have you tried a huawei hub (I know that you've had a Sagemcom)?

Openreach engineer has just been he's seeing 40 - 41 Mbps at the master socket but as soon as the router is plugged back in the speed is dropping back to 31 -32 Mbps with nothing connected to the router, now this is a new router (or is it reconditioned as the log goes back several years) and a new cable.

Openreach are also saying that our master socket is over 1km from the nearest cabinet so the line is performing really well, could it be the case that TT are being a tad optimistic in suggesting a guaranteed speed of 40Mbps and suggesting an estimated speed 41 - 51?

I'm currently seeing 32.5 logging on to the router and 35 according to the service dashboard via Ookla.

So where do we go from here?

Chris any day this week apart from Wednesday will be fine thanks.

Are you available any time for the visit, AM and PM? Would you just like us to book the soonest appointment available?