So just gone live this evening and the hub has sync'd @ 40/14Mb when on previous ISPs I have achieved 62/16Mb which has been persistent for years. When I first got FTTC 4-5 years ago, I was on 80/20 but that's another story for cross-talk apparently... 😞

I can't tell if my SNR is high and causing this, as there seems to be a bug with the default firmware (1400T) not reporting the dB... Also friendly DHCP names don't appear to stay 'saved' either. But DLM may settle my line at a higher rate maybe over the next few days ideally.

Also noticed pings are at 22ms when typically been 10-12ms but unsure on Fastpath settings or again, if DLM may settle this soon too.

I've read threads already stating there are newer firmware releases out since this one. Could someone push the latest firmware to my hub please to fix these bugs and other tweaks needed? I have tried restarting it and it hasn't pulled any new firmware through, still sat on 1400T.

Also double-check nothing wrong with the line being activated today speed/ping-wise and it should improve I hope?! 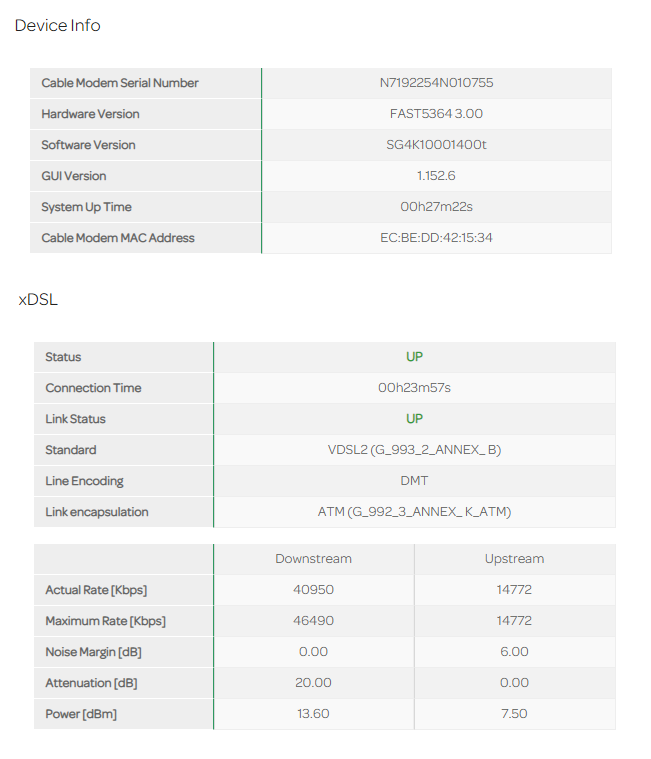 Fair comment, although even with TT my noise margin was @ 6dB which usually is optimum for 'stability' on Openreach's DLM system, to give me the same speeds as I had prior. Plusnet I had the same dB profile and had a better sync and ping. Sky I had a 3 dB profile which saw a further slight increase but that's a moot point.

Currently, my issue isn't just the speed/sync - it's also the unreliability of TT's router (the crashing and internet dropping, despite DSL being online still and no sync drop) - and speeds at random times of the day, although generally peak and late night times it appears. I've never had any issues with previous ISPs, so I'm just chalking TT up to experience and will not want to touch them again unfortunately.

2 family members have had issues with TT a good few years ago (just on ADSL) and I stupidly thought that reputation had gone and TT weren't too bad. But there are still thinks that irk me as explained above.

Apologies, but you seemed to be having some issues regarding @ferguson's correct statements regarding BTOR's ownership and management of fibre. Which in the context of your issues was an arguement not really worth having.

Agree that the logical data routing is important, but that tends to be a target site specific problem rather than a general overall performance issue.

I have only quickly scanned your thread but I'm not sure that the data routing is the real issue. Your router stats numbers don't look to be "optimal", but that is something only TT can resolve.

Performance can change between ISP's as there are some high level parameters that are ISP selectable. My understanding is that TT have chosen to default to using the conservative "stable" option rather than a "speed" option - so TT may well be slower than some other ISPs. But again TT may need to investigate to see if that is relevant in the context of your issues.

Message 3 of 34
Great post Garton - and the logical ‘data’ route is what matters...

Not what physical cable it comes down in this scenario.
0 Likes
Reply
Options

There appears to be some confusion here.

There is a difference between the logical route the data takes between two points and the physical infrastructure that that data travels over.

The @Sparxeh's tracert in the previous post shows the logical route, data from a TT user traveling over the TT network. This routing is managed by TT.

The physical infrastructure is fibre, for most residential customers that is owned and managed by BTOR as stated by @ferguson. TT simple lease the lines, but never own them.

Confusing the physical with the logical can cause confusion.

Nothing false about my posts or this thread - it's entirely factual. Just because you're a 'community star', you don't have to play PR for TalkTalk as well and try deflect some harsh truths and reality about their infrastructure.

In the meantime, here is something to think about in terms of this 'every ISP is just Openreach' mantra you have... Here's a tracert just now on my TalkTalk line, now reverse lookup hops 2, 3 and 4 and that's three pieces of TalkTalk infrastructure it's just ran through before it hit where I want to go.

Look, I wish you goodbye and good luck. But please don't post false knowledge in the meantime. Other people read these threads too.

I’ve no idea how you took that away from what I just posted. Because it doesn’t say that so you might want to re-read it.

Either way, I’ll come back in 2 weeks and post up the new stats and speed to prove my point.

Nothing wrong with me asking TT though in the mean time, why I can’t get a service I’m having to pay for still? Even if I am moving swiftly away.

You really think each LLU ISP doesn't have it's own backhaul? Don't be daft. Good look to which ever Openreach "engineers" connect your line in their fibre cabinet.

You really think every xDSL ISP runs the whole backhaul on Openreach alone? Don’t be daft.

Why do you think specific ISPs can have network outages, yet it doesn’t effect other ISPs? Because they have their own backbone and links ultimately. Not all of them, but the big ones often do.

Either way, it’s quite clear when I personally know after having FTTC for 4 years now; that unplugging Plusnet at the same solid sync and speed I’ve had for years, along with the same when I was with BT and Sky - that it’s a specific TalkTalk network issue. The moment their hub went in it’s gone downhill in every aspect.

I know I’m not the only one, as you can tell by the many other threads of other customers complaining about speeds dropping - especially in evenings / peak hours. Congestion couldn’t be anymore obvious.

Completely wrong, the LLU network only applies on the copper side, the fibre network is entirely in the hands of Openreach.

Completely wrong. Both TalkTalk and Sky have their own LLU networks.

The backbone is entirely different, despite using Openreach's same cable to cab and exchange. You can also tell on tracerts and your hops.

I've been with Sky before, they was my first FTTC ISP - the sync, pings and reliability was miles better. I only hop ISPs for better deals and rewards etc.

The same basic network is used by Sky as TalkTalk, so do let us know how things go when your switch goes through.

So nothing changed, DSL uptime is nearly 48 hours solid... Got home tonight and thought wow the internet feels so slow and streams are buffering...

Run a quick speed test (wired) and wow... Back to the usual 4Mb downstream speeds. Why is this? Is TalkTalk's network really this awful and congested? 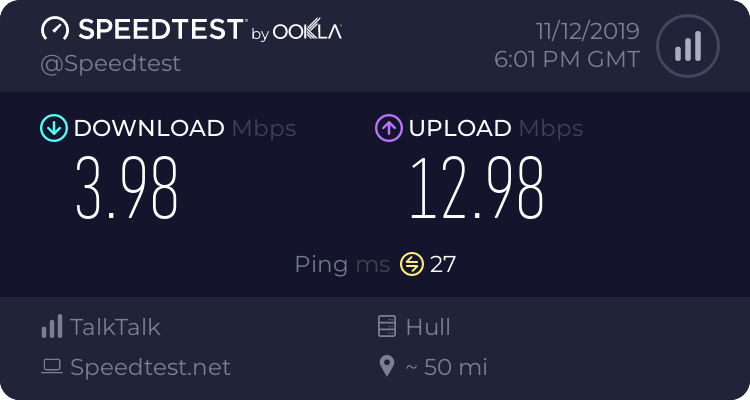 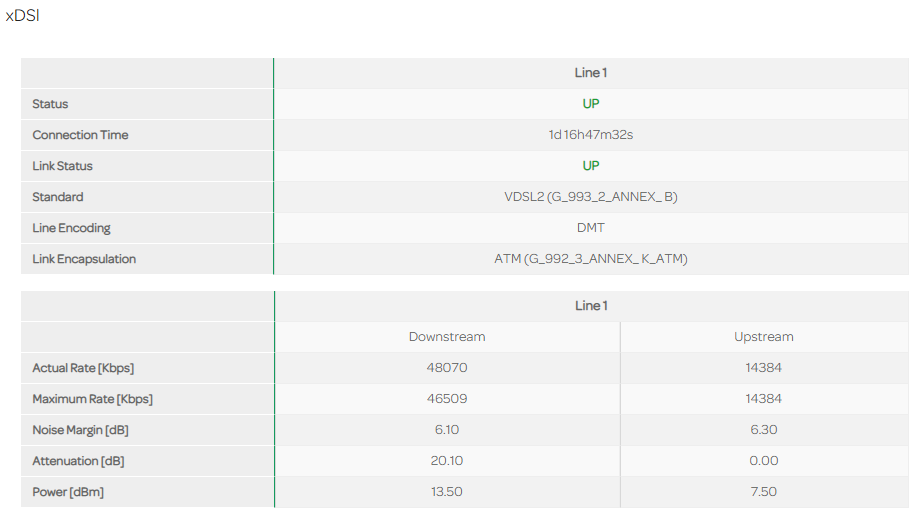 Is there is anything else that we can help with on the Community then please let us know.

Unfortunately I've done just that! Thanks for the help though.

I have now signed up to Sky's Superfast Fibre instead... 2 week wait though 😞

I just couldn't stand the network/router/speed issues on a daily occurrence, it drove me mad in the 4-5 days it's been like this.

To discuss cancelling your service, please can you contact our Loyalty Team.

I just have to keep going on and on, the router / TT network is just incredibly non existent for me.

30 minutes later the router crashed again. Same symptoms as described above. DSL and internet says it’s online, but no device wired or wireless can connect to anything.

Restarted hub and now it won’t even come back online!! Checked the logs and it’s saying the DHCP WAN process has failed... along with some DNS failures. So I’ve factory reset the hub and still it won’t connect. I’m having to use 4G yet again.

So currently the router is dead as a do-do. I’ve got no internet at all now and it’s refusing to come back online. Despite showing it has a sync in the router.

I’ve had enough. I want to cancel, move ISP and don’t feel I should be paying a penny to TalkTalk for this abysmal service.

Ok, back again and the TT hub is an absolute pile of crap...

So was just browsing and all of the sudden, me the wife and my bro in law all cry "the internet is down again"... I login the router, DSL still says online, sync is still up, but NOTHING will connect. Not my wired desktop pc on ethernet, or any of the wifi devices. Just straight up disconnected/404 messages when you try load anything. Gave it 5 minutes and it didn't sort itself out, despite saying online both router/dsl...

Had to reboot the hub, low and behold, it starts working again... I'm not putting up with an inferior connection, poor network giving me slower speeds and a duff router!

I'm on the brink of just cancelling TT within the 30 days and moving back to Plusnet.

Props to Openreach! 1.5 hours after being booked, young lad just turned up out of the blue at my house.

He confirmed his own speed tests before coming were only achieving 5Mb down and up. He reset DLM on his device and cut and re-crimped my master socket and I'm now @ 46/14Mb down/up.

Still missing about 10-15Mb but wondering whether that'll improve over the next few days. The engineer was doubtful and believes it's just the pair I'm on to TalkTalk at the cab causing the speed decrease...

Can anything else be done to get me back where I was @ 60Mb+ ? Reading the 30 day great speed connection guarantee, I presume I can move to another ISP if I'm still not happy? 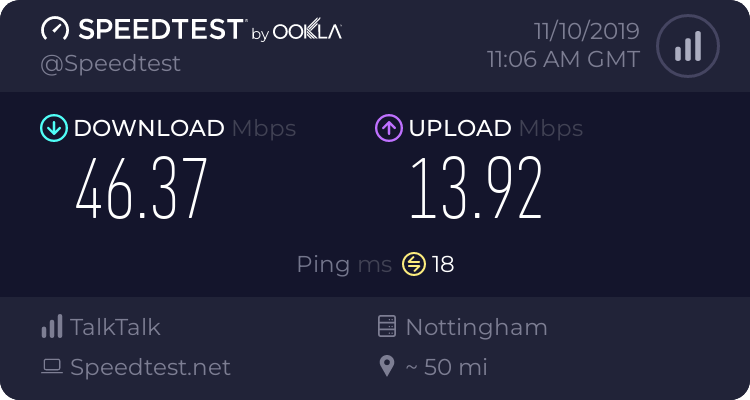 So day 4 and the DSL was up for ~18 hours with the TP Link perfectly fine, no speed bump from DLM so I'm quite confident it's within Talktalk's network or external/physical causing the fault.

I plugged back in the TT hub just now, as I'm sending the TP Link back as it didn't "fix" the issue. Shocking how bad the TT hub performs and syncs, compared to the TP Link, I presume it has a better Broadcom chipset or something within.

Here I am now back on the TT hub... Still dire, low speeds, high pings and real world downloads are much slower still (i.e. not a 'speed test' which seem to have a priority)

EDIT: Decided to bear the brunt and go on live chat. Fortunately she booked an Openreach engineer fairly quickly for me, explaining they'll look into it from the exchange/cabinet etc within 72 hours and I should receive a text with the outcome. 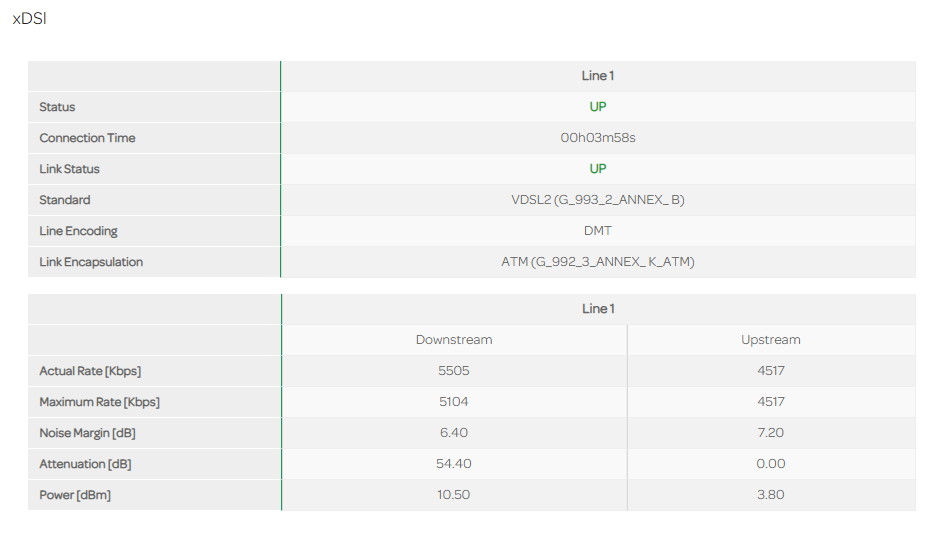