My devices are also being disconnected and reconnecting to WiFi moment's later. This has been happening for a couple of days now, but I thought it would fix itself. It occurred around 3 times today, and that's when I thought I'd check the router logs. Is this problem causing wireless issues?

I've taken a screenshot of the logs and you'll be able to see that devices are connecting again after a couple of minutes. 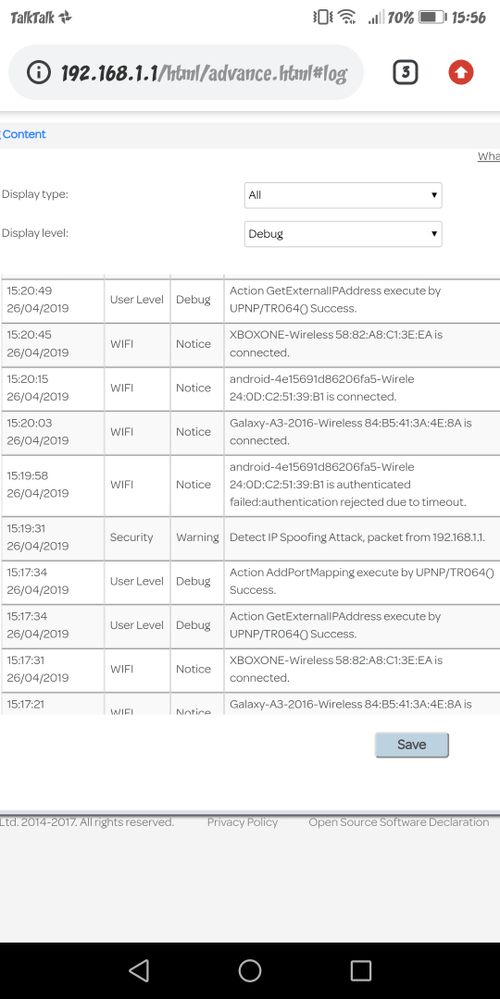 An IP Spoof attack has been detected? As you can see, the Xbox is connected at 3:17pm and then connects again at 3:20pm, but this is happening on all devices which is also shown as devices are connected again in the logs.

I spoke to an advisor via live chat and they ran a line test, saying that everything was running fine.

Any help would be much appreciated. Many thanks.

@Michelle-TalkTalk Thanks for that. I'm just glad it's not a major problem.

We’ve done an internal review and we can’t see any issue. Can you disconnect all the connected devices on your network, restart the router with default settings and then re-connect the device. Also change the wifi password and ensure that WPS is disabled.

Thanks, I'll let you know as soon as I know more.

Could I just confirm the make and model of the router that you're currently using please?

Thank you very much.

I'm currently looking into this and will let you know as soon as I know more.

@Chris-TalkTalk No new devices have been added or software downloaded on any devices. All apps downloaded would have been through the app store.

Is this anything to worry about?

Have you connected any new devices to your network over the last couple or days, or installed any new software on an existing device?