@Debbie-TalkTalk  Hello, as requested here is the new thread.

I live in Newtownards.  My internet has been out since yesterday morning.  Same issue as this thread: https://community.talktalk.co.uk/t5/Fibre-Broadband/newtownards-internet-service-cut-off-likely-open...

It was fine up until 9:30am, spoke to customer service via online chat that were no help and insisted I had no issues.

When I now do a test from talktalk website, it shows warning and there is a problem with your internet service

Logging on to the router (Yesterday), it shows connected, status showtime.

Multiple devices with different OS's connected via wired and wireless connections.  Shows connected to router, but no internet connection

I was due to work from home yesterday, but had to go into the office due to the outage, which was frustrating.  It has been down for over 24 hours now.  It looks like I live in the same part of town as that member in the other thread, who is getting the exact same issue.

So far so good.  Things seem a lot better this evening.

I'll check later this evening.  Thanks for looking into it.

Hi srjohnston80, the line tests show a synch rate over 78 and no drops. Is everything ok now or are you still having problems?

Morning by the way! Also talktalk tried to phone me on Sunday regarding issues, but I was not able to answer the phone at the time.
0 Likes
Reply
Options

Doesnt affect voice, I did have the DSL on the router reboot yesterday evening.  That doesn't happen very often.

I'm sorry to hear this and I'll take a look now. I've re-run the line test which hasn't detected a fault. Have you experienced any more outages since your last post? Does this affect the voice service too?

Would it be possible to get a line sync done?  The line has been up since Friday, but I have noticed a couple of quick outages, which I have not had before.

That would be appreciated.

Thanks for the update and I will feed this back.

This can be closed off now.

BT Openreach have finished working on the cabinet in or area and have restored internet access.  I have not made any changes to my router at all and now getting full internet.

This proves that it was not an issue at my house at all, rather the cabinet was at fault.  If somebody had just contacted BT Openreach as I requested and talked to them, you might have been able to find out what work was being carried out in the area.

According to the latest Ofcom report, talktalk has the highest DNS failure rate among the big ISPs. But please notice that if you don't use talktalk's own DNS server, HomeSafe won't work (only matters if you do need it).

Every single line test completed (they run several different ones) has not detected any issues therefore this is why an appt to the property will be required. If the line tests detected a line or cabinet fault then this would be passed straight out to a line engineer. If you would like to go ahead and arrange an engineer visit then the quickest way would be to contact our Faults Team (live chat) to arrange this.

if you follow this thread and mine, you'll see there's a BT and TT outage reported between several neighbours in the same area. We can't all be experiencing simultaneous router DNS problems

DNS could be an issue.  I logged on to the router and tried to ping www.google.co.uk from the maintenance page in the router.

I wonder if changing DNS settings in the router, might give internet access.  Any suggestions as to what I could change it to?

This service status can be run from any device connected to internet from any provider. Try it yourself

Interesting. How did you run taktalk test if there's no internet? If all lights of your router are green it could be a DNS issue. Try to ping an IP like 8.8.8.8 and then ping a domain name such as bbc.co.uk to see what results you get.

Could we arrange the Openreach engineer to check over the local cabinet?  This I think would resolve both my issue and that of @brotherdeluxe

As we are both having the same issue, can we please get the cabinet checked over.  We are both convinced it is not a local router problem.

I live on my own.  I am unable to work from home, if I do not have internet access.  I work in an office from 8 - 4 Monday to Friday, so it will be very difficult to arrange to get an engineer to visit the house.

Have the engineers been able to confirm this fault, when I run the test from talktalk website? 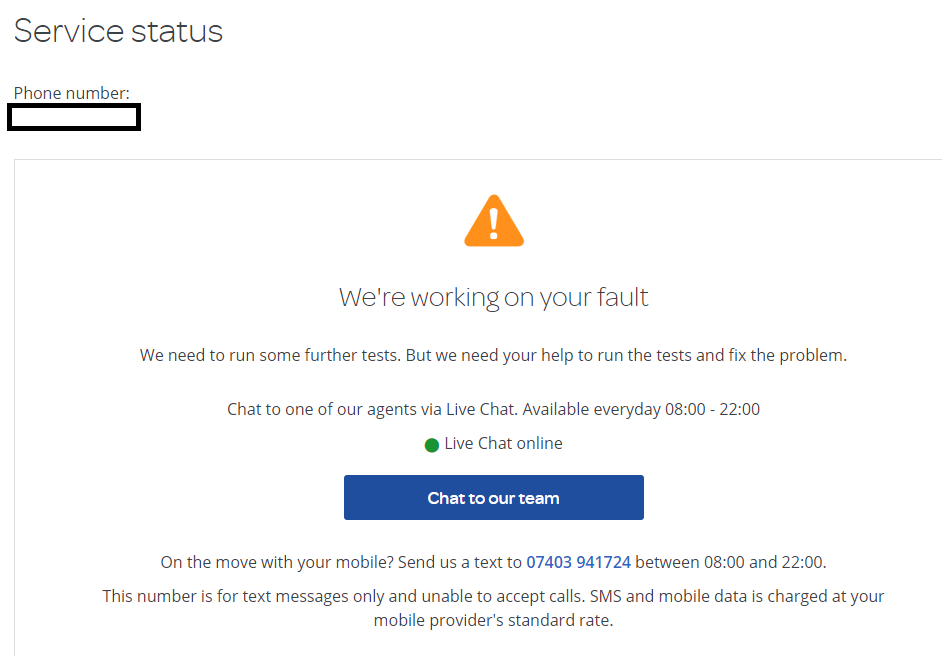 Thank you. If this fault is still present and you have tested with a different device then the next step will be to arrange an Openreach engineer visit.

I am convinced the issue is with a cabinet in our area, that provides services in our area.  How difficult is it to request somebody to contact bt openreach and see if there is an issue.

If this could be done, it would be really appreciated.

EDIT: The fact that at least 2 people from the same area are reporting exactly the same fault, would rule out local router issues.

I tried that yesterday, but will try again later, when I get home.  Will be in about 3 hours time.