Issue fixed only for TalkTalk to mess it up again

Only for someone at TalkTalk to run a line test which has knocked the speed back down to 70Mbps and with worse line stats. The SNR has dropped from 9 to 6, the attenuation has gone from 12 to 16.7 and the transmit power has gone from 0.1 to 2.3.

Speed to your Router

But BT Wholesale state a range of 80-74 (which is what I was connected to and also what Sky used to provide). This is also the value on my contract, the threshold is 67Mbps which my line has actually been below for some considerable time until an engineer attending on the 29th June fixed the issue.

I assume the engineer did a DLM reset which worked, only for TalkTalk to perform a line test when one wasn't needed and I assume the DLM has now decided to kick in again or TalkTalk have purposely throttled my download speed.

The max rate this line says it could handle 24 hours ago was about 95Mbps and now it's saying 70Mpbs which happens to be the rate I'm synced at.

So I would like someone from TalkTalk to explain why a line test was performed with no reason to do so.

Why my speeds are being throttled and why the estimated speeds greatly differ from BT Wholesale and what my line was achieving for the past few days.

I'm really sorry to hear this. I can see that this fault is with Openreach and will be investigated by a line engineer.

We should receive further updates from Openreach within the next 48hrs.

So here we go again, I don't think talktalk will fix this and I think they are doing on purpose. Every other supplier in the past has been able to provide the contracted speeds, other suppliers also allow the speeds to drop only a bit if the line can't handle the speed (as my line can't handle the full 80) so with Sky it would change between 70 and 76 quite a bit, but Talktalk goes the extra mile and puts my speed even further down.

Here's a screenshot the contract you guys clearly don't read yourselves.

Here's a screenshot from Talktalks own joke of a service centre that still hasn't been corrected. 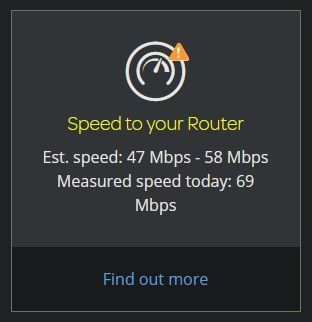 Note how I'm connected at the same speed that the est speed above says, funny how that's happened and funny how no one from talktalk has even made an effort to correct.

Honestly what a joke of a service, I suppose I'll wait for one of the so called staff to copy and paste a generic reply, just as the live chat staff do. Incidentally given my speed has now dropped below my contract speed that now gives me an opt out of my contract.

Your router firmware should be updated to the new version in the next few weeks.

Hopefully things will stabilise after I've updated the firmware on the router.

Openreach will not disable DLM on the line.

I have re-escalated this for you, although the team may not pick it up until after the Bank Holiday.

It is odd that a reduction in SNR margin leads to a drop in speed, the opposite is generally the case.

One thing I do notice is how the Transmit power which was like 0.4db is now at 1.4db the other day it was around 2.1db, I've noticed the downstream now displays a latency of 8ms which means good old DLM has kicked in, I've no idea why this DLM is doing this, the line was fine. Can DLM not just be disabled by Openreach?

Oddly the upstream never has any issues. Am I best just leaving the router on for another 2 weeks and just see if it readjusts?

Thanks for the update and I'm glad to hear that the speed has improved. If the speed does drop then please post back here as we can refer back to your previous posts in regards to the speed.

Well I reset the router and it came back online at the same speed as 79.995Mb/s so that seems fine, the connection is also fine. I only mention the issue with the service centre because if I need to speak to customer services over any speed drops (like in the past) they tell me my speeds are within normal range (as they go by what's on the service centre).

Despite BT Wholesale and my contract stating otherwise.

Here is the estimated speeds from another ISP (Sky)

Also to note your customer services were prepared to let my contract go because they stated the estimated speeds I was given, when I signed up again in March/April were incorrect (they weren't - they were the same as BT Openreach), so you might want to take that into consideration too. On another note the VDSL faceplate seems much better than the standard filters.

Ok. If the speed does drop again then we can raise this over to Openreach for further investigation if all testing has been completed at the test socket with 2 different routers. It's possible that SC may be mis-reporting the speeds. Would you like us to check the predicted speed range to see if it is different to SC?

Apart from Service Centre, how is the overall performance of the connection?

The speed is the same - the speeds in the service centre are incorrect and have been for some time, you can even check via BT Openreach. The lowest speed I should get is 67 and the normal will be 74 to 79, the issue is if I reboot this router (as software updates like adblockers etc require the router to be reset) it will then reconnect at the speeds shown in your service centre. 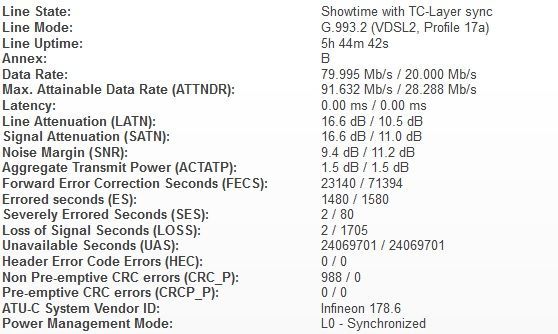 But the router has been online for:

But as stated soon as it gets reboot the speed will drop down to around 50 and won't go back up until BT Openreach goes out again, I'm positive the issue is on TalkTalks side

Range B is the same one as in my contract.

I've re-checked the connection stats and the sync speed looked really consistent up until yesterday. Has something changed in the last 24hrs? As the sync speed is higher than the estimated range then it looks like Service Centre is mis-reporting the speeds.

The router isn't really that relevant, what is relevant is how your system has the incorrect speeds so I know for a fact if I reset this router or turn it off for 30mins it will just drop back to 50 or 60mb again. I don't see why this is so hard to fix.

If you switch the router off for a full 30 minutes and then check Service Centre again does it the show the correct router connected?

Yeah it's clearly not going to catch up, I'm almost sure that this was down to the fact my speed was being throttled on your end.

I'm sure if I turned my router off and on again it would drop to the speeds that TalkTalk has incorrectly set. 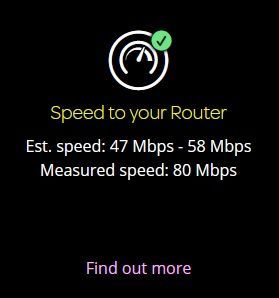 Your system still thinks I've got a Sagemcom router, despite sending it back weeks ago with the Huawei router. Neither of which have been confirmed (by TalkTalk) as received.

It can take a couple of days for service centre to catch up.

Issue is now fixed, however is TalkTalk going to fix this? It's still display the incorrect data. 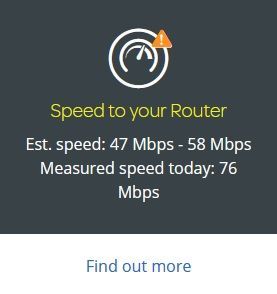 The line test is now detecting a potential line fault so I have passed this over to Openreach to be investigated by a line engineer.

We should receive further updates from Openreach within the next 48-72hrs.

Looks like DLM is active yet again... and has completely messed up my line (again). The speed dropped to 62 and now is 61. The latency which was 0ms is now at 8ms (a sign of DLM). None of this would have happened if TalkTalk didn't start checking the line for no reason.

If the line is reset again, I suggest someone leave notes on my account not to perform any line tests. I should point out that line tests have always caused my dsl to disconnect, this happened with Sky also if they performed any line tests.

Lastly I've returned both TalkTalk routers (one with a bad plug and the other that can't even stand up because of a small piece of plastic that came off the back) So I'm currently using my BT Home 5A, which I prefer to use anyway.

Do you experience issues with the performance of the connection? (buffering or pages slow to load)