I have just moved over from BT who I have been with for many years (line activated yesterday). After some problems getting my Draytek 2682 connected and working (got there thanks to a help article on the Draytek website:https://www.draytek.co.uk/support/guides/kb-isp-talktalk), I've got a working connection - huzzah!

What I first notice however is that the sync speed is significantly lower than with BT on the same line a day after switching. Where I used to get 80mbps, with a max download rate of nearly 72mbps, with TalkTalk I now get a sync speed of 52mbps with a max download rate of about 43mbps. I imagine this is due to the line profile /DLM- would it be possible to raise this as I know the line can do much higher speeds? 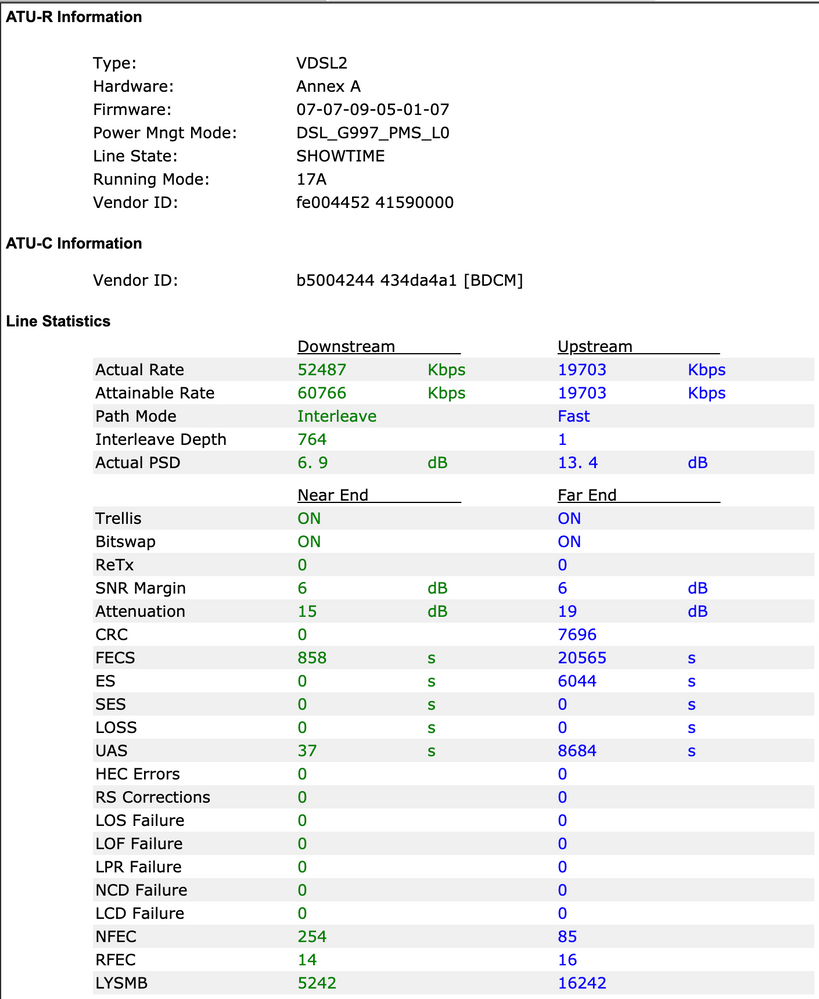 Ah, really glad to hear that  and we're here if you need us 🙂

Message 2 of 17
Thanks Debbie, that worked. I'm now pulling speeds of up to 61mbps, which is approx 85% of sync speed - much better. I'll keep an eye on the sync speed over the next few days, and hope it continues to rise towards the 80mbps mark. It's looking promising through - thanks ever so much for all your help.

Your responsiveness, and willingness to help are making me very glad that I've moved to TalkTalk! 🙂

Could you do a quick 30 minute power down of the router and then run a speed test? (this will reset the current session and can often increase throughput speed)

Thanks for that. Yes I can see that DLM is still upping the speed daily, which is great news. However, I have noticed that the actual transfer speeds I'm getting are sticking at around 50mbps despite the increasing sync speed. I'm testing use speedtest.net (and https://www.talktalk.co.uk/speedcheck/), and plugged directly into the router via ethernet. I notice that when the test first starts it spikes to 57mbps for a second or two, which would be about right as it's 80% of the current sync speed of 71mbps, but then always quickly settles down to 50. I've tried various different servers on speedtest.net, but all are the same, if not slower.

Do you have any idea why this would be happening?

I've checked the connection stats and your line is now in sync at 65.7mb. I can still see some re connections on the line but this may be when DLM changed the profile.

The profile was changed 01/03 and 03/03 so DLM is still monitoring and making changes.

Hope you had a nice weekend!

It looks like DLM is slowly increasing the speed - it's now at a sync speed of 65180 kbps, with a reported "attainable rate" of 65637 kbps. It jumped to 65000 on Saturday, but seems to be increasing much more slowly now. Is the best thing to do here just to leave it and see if it continues to increase?

Message 8 of 17
Ok thanks Debbie, will do.
2 Likes
Reply
Options

Ok, please can you connect the router at the test socket and leave it switched on without rebooting over the weekend? We can then check the connection stats again on Monday to see if DLM has made any further changes to the profile/speed.

The router rebooted itself, or at least the connection was reestablished, on the first night which resulted in the sync speed increasing from 52 to 60. I then rebooted this morning in the hope the same would happen - but it stayed the at around the 60 mark - just me being impatient! As far as I'm aware, those are the only two disconnects.

Although now I come to think of it, on the day of activation I couldn't get either the DrayTek router, nor the TalkTalk hub working, so this likely involved a whole bunch of reconnects before I came across the DrayTek support article I referred to in my original post, which gave me the information I needed to get the router connected.

As I say, I know the line is capable of a full 80mb sync speed, and have had BT OpenReach engineers out some time ago testing the line who fixed an issue which resulted in this higher speed. So is there a possibility of changing the profile of the line, as I know from previous experience that it can take some time for DLM to work it out itself, and have been in a situation where it never got to full speed until I requested the same from BT.

Thank you. There are re connections showing on the line and this can affect the sync speed.

Have you rebooted the router?

Thanks very much for looking into this for me. I've now added my account number to my profile notes as requested.

Thanks @Divsec, overnight the connection has increased to 60mbps sync. Still 20mb below the speed I had with BT, but better.

@Chris-TalkTalk, thanks for your response, and yes that's the correct phone number (starting 01453).

Welcome to the Community

Hi @mustdobetter welcome to the community your post has been flagged for assistance and you should hear during tomorrow.

The Draytek link is really helpful and got me going also. My dsl stats are almost identical to yours apart from the downstream interleave where mine is fast and 1. Needless to say I have no complaints.

I would avoid too many router restarts at all costs.

I don't work here and all my opinions are my own.
0 Likes
Reply
Options