My broadband has been off since mid afternoon.

I have an orange flashing light.

I've done the 30 Min unplugged I've also reset, all devices are connected but no internet.

I've done the online line test but just states problem is indoors, nothing has changed with the setup.

Any advice would be helpful.

hi all. everything has been running just fine, no problems at al, fingers crossed it stays that way.

I'll see how it goes, all fine at the minute.

Channel 52 on 5ghz seems fine too.

This is a fairly old network adapter, but if the 2.4GHz band behaves itself it should probably be OK. I did find a post on the internet where someone complains of it being slow & intermittent & the solution was to run the troubleshooter within windows for it, but so long as the driver is up to date, that is probably all you need to check.

hi keith, the 2 graphs were a small snippet this afternoon, they don't correspond to the full drop outs.

wlan driver and interface are below. 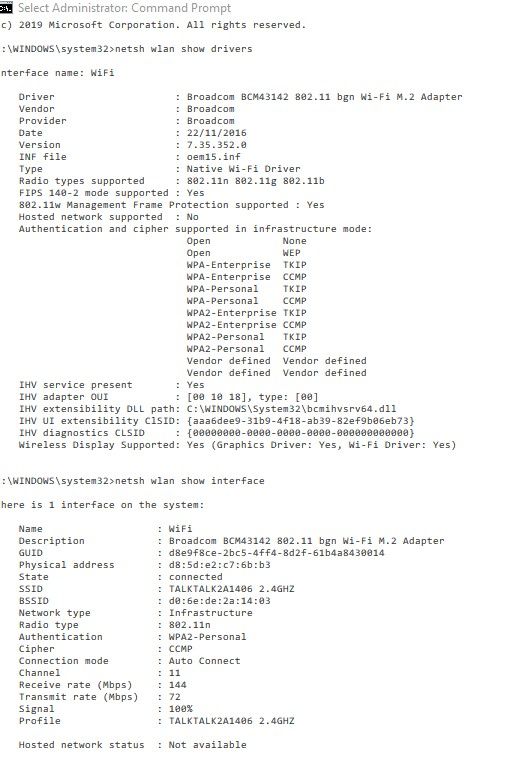 I guess it all depends if the drop in the graph corresponds with the time of the problems that you are suffering from. The drops may differ on the Android if the X & Y axis of the graph are to a totally different scale.

It wouldn't do any harm to get some basics on the PC's network card, so from a command prompt on the PC please can you get me the output from these commands:-

hi Keith, i didn't have the 2 analysers running together.

I've just done another one, the spike on the laptop is a lot greater than on the android. 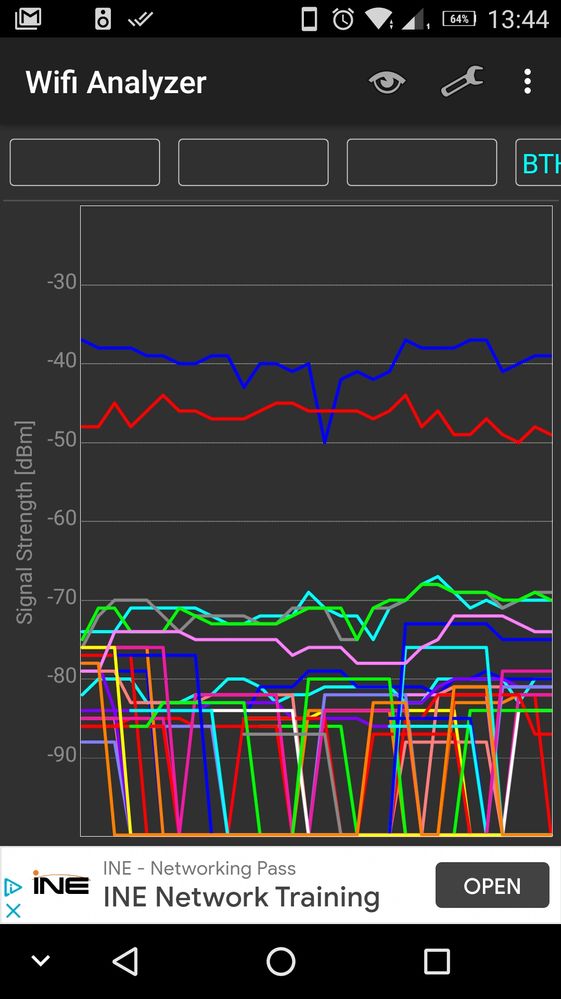 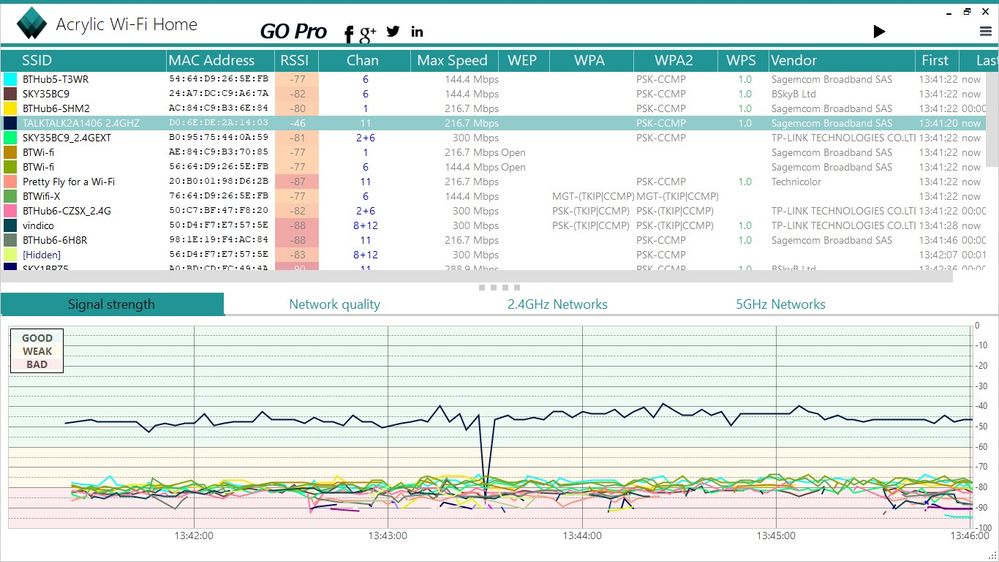 OK, that was worth checking but yes everything does look generally look OK. The dips in signal strength seen in acrylic, if you put the android analyser next to the PC, do you see dips at the same times there?

Hi Keith, thank you for taking the time to look at the tests, very much appreciated.

I will change the 5ghz to channel 52 shortly and see how that goes.

Regarding the placement of the router.

1: the phone base station is a good distance away.

3: no speakers other than the actual TV speaker.

4: no monitors at all

9: the router is on a window sill above a low radiator, we have no tower PCs, laptop 6 mts (wireless, no usb adaptor, internal wificWiFi in 5 year-old laptop)

The house was new 20 years back and we had numerous phone extensions, on advice from here, 10 years or more back I removed all extensions except the one for the main phone, also removed all external  bell wires.

Ref the dips on 2.4ghz I left it running for an hour and there was a few sharp downward spikes.

I think or hope your saying all is relatively ok, I guess this wouldn't explain the overnight cut offs I've been experiencing.

Thanks again, I think I can only monitor the cut offs and check 192.168 and see what times the cut offs are or hopefully they'll be no more of them, I really do think it's to do with openreach and the work there doing directly around this area and the changing of Huawei boards to Nokia boards (this was my original problem) I think or hope they are resets of some type, the engineer half stated that you wouldn't necessarily see it at the talktalk end, whether this was just a line he was given I dont know but there have been lots of issues with other providers including sky and Plusnet.

Anyway, probably said enough, any other tips would be helpful.

(still on the older router) will change it if necessary, it's only a year old and same router as the new one.

Your 2.4GHz band has a lot of interfering signals in it but hopefully, you'll be just about OK as your signal is a lot stronger than the rest. Having said that, it could possibly be a bit stronger. The worrying thing is the sudden dip in signal strength at about 16:41:20 yesterday, although it only lasted a few seconds. This could be down to just about anything including your network card in the PC.

The 5GHz band could be improved a bit by moving to channel 52, with a couple of caveats:-

Now to router location, but obviously, this is not always practical & a compromise has to be reached.

The most likely reason is that the adaptor in your PC is not compatible with the 5GHz band. I'll look at the screenshots a bit later.

I've sent via message what I can from acrylic, I can't see the 5ghz and the quality one requires acrylic pro.

I've also sent hopefully all the correct screenshots from the android app you recommend.

I must be doing something wrong on acrylic but not sure what.

ive downloaded acrylic and have it running but i cannot see my 5ghz.

I will PM it to you now.

hi keith, i dont now have an anaylser can you recommend one.

ref your guide have you posted a link to it or sent it in a message, i cant see it anywhere.

Can you send me the following screenshots from you analyser, so as I can check them for you? Not knowing the nalyser you used I cannot be more precise:-

Please post the screenshots that I have requested in my guide (no photos please they can be difficult to read as text can get out of focus when zoomed), from the analyser you are using (also in my attached guide). Please ensure that the analyser window is maximised (if Windows) before taking the screenshots & upload them via the "Insert Photos" button (in a mobile browser it's the picture icon) on the post editor's toolbar as large images. If they are too small, I will not be able to read them & although I can enlarge them, this just puts the text out of focus. If you prefer PM them to me. If you do PM me, then please add a link in there to this thread, so as I can find it easily.

I am currently and have been for a year or so using method one, where can identify which of 2.5ghz or 5ghz I want to join with WiFi.

I have (I think) prior to 2 weeks ago used some less used channel ranges that I'd found with an app, where you checki neighbors channels,it was explained on here at some point.

I'm probably explaining this all wrong but hopefully you'll understand

The TalkTalk Wi-Fi Hub is a dual-band router & offers both the older 2.4GHz & the newer 5GHz Wi-Fi bands. The problem is these are two different networks (SSIDs), but they share the same name, so you can't tell which one you are connected to. These can be split into two if required, to do this, log into the router (http://192.168.1.1) and enter a username of "admin" and use the unique router password (see the label on the rear of the router at the top).

Append "5G" to the end of the network name of the "SSID" field. Then click "Apply".


This will not fix your issues, but it will make it much easier to identify the band you are connected to. This way you will know which band is causing your problems.

Having said that, there is another approach which can be better, which is to use Band Steering. This will automatically move any 5G compatible device connected to the 2.4G band to the 5GHz band. To use this facility on the Wi-Fi Hub, leave both network names identical.

You may then wonder what was really the point of this if it won't solve the problem? This is because the whole topic is too complex to be dealt with in one post. The next stage involves sending out a guide to you to help you get me some important diagnostic results, so as I can analyse them for you and recommend changes to your router configuration to solve them.

I only send this out to people who request it.

I've checked the connection stats and it looks stable, there some re connects but Gary has advised that the router has been rebooted.