So I have been running dedicated Videogame servers for years such as Minecraft servers on port 25565, Garry's Mod servers on port 27015 and Rust servers on port 28015. I have done this many times on many different internet providers so its not like I'm new to this however it seems that talk talk refuses to let any of these ports open. I have seen article after article on this page giving ideas of ways to make it work but it appears that most if not everyone comes to the same conclusions.. "talk talk has blocked port forwarding", "it doesn't work", "use a VPN to port forward" etc. so I guess with this post I'm simply trying to get a definitive answer, is it possible to port forward on talk talk? or am I just wasting my time and should I look to change back to another internet provider?

Thank you for your time and consideration

Thank you @Piethorne this has been very insightful. I am very thankful and appreciative of this as it may potentially help me solve my issue.

I will try running the server when i test the port as i had not realised what you said before to be true. thanks again.

@1O1Games As I mentioned earlier, these settings are for Web Servers using the DG8041W hub. I don't run games, or have any interest in them, but the same principles should apply to them. No DMZ required.

One thing to note is that a game/web/other server MUST be up and running for a port forward checker to work, otherwise you're effectively asking it to check a PC that is switched off / doesn't exist. i.e. the game etc opens up the port, and if it's not running...

Like others, I once thought TT blocked some ports, but it turned out to be a senior moment... 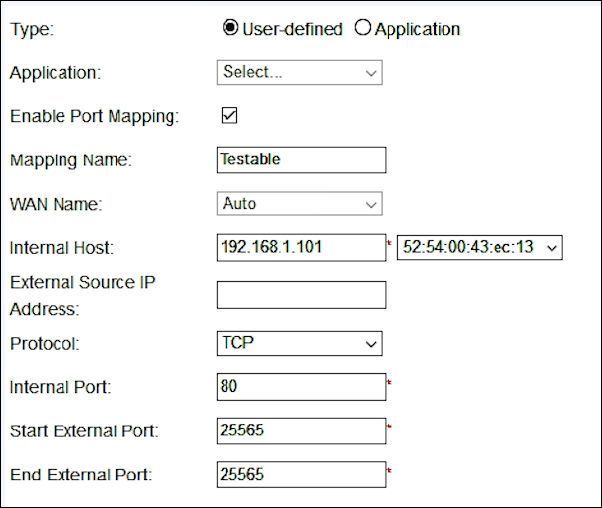 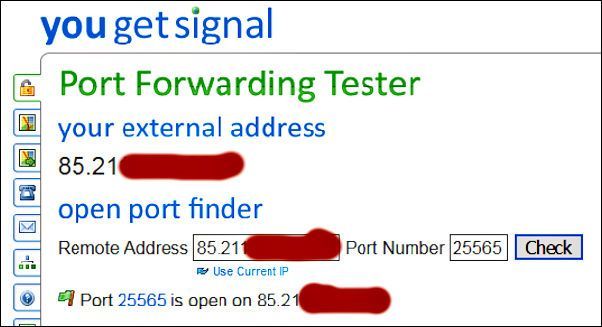 The particular test setup above is for an Apache web server running in Ubuntu as a virtual machine on a NAS. Sounds complicated - but it isn't.

The earlier image I posted which showed the 3 ports you mentioned, were directed to a Windows 10 IIS web server. The Windows firewall inbound rule is a read-only one set up by MS for port 80 (http). To see it start C:\Windows\System32\WF.msc, click on Inbound Rules at the top left and navigate to "World Wide Web Services (HTTP Traffic-In)", and click on Properties on the right.

You can just as easily create different Inbound / outbound rules for different ports if you changed the web server binding port to something other than 80. I've tried a couple of others for verification.

I've written a simple web page as a reminder for myself, specific to the DG8041W hub, that explains setting up a simple web server, going through port forwarding and firewall settings. It's mainly for Windows PCs, but the basics apply to Linux machines as well. Some of it may be relevant in setting up a game server. See: http://piethorne.dynu.net/ddns/index.html

I'm just a customer who might be able to help, not official help & support.
0 Likes
Reply
Options

DMZ is also Enabled on my Desktop IP and the same IP address has also been reserved on the same Desktop Device as you can see below. So I have 0 CLUE why it would not work. I have also tested other ports and even the pre registered ones for games and none of them come back as open. so it feels like Talk Talk has blocked all port forwarding. is there someone I can call to request a port be opened for me or something? I have also tried running port 25565 through TCP exclusively as I saw in another thread UDP could prevent a port from coming back as "open" on "https://www.yougetsignal.com/" but to no result. 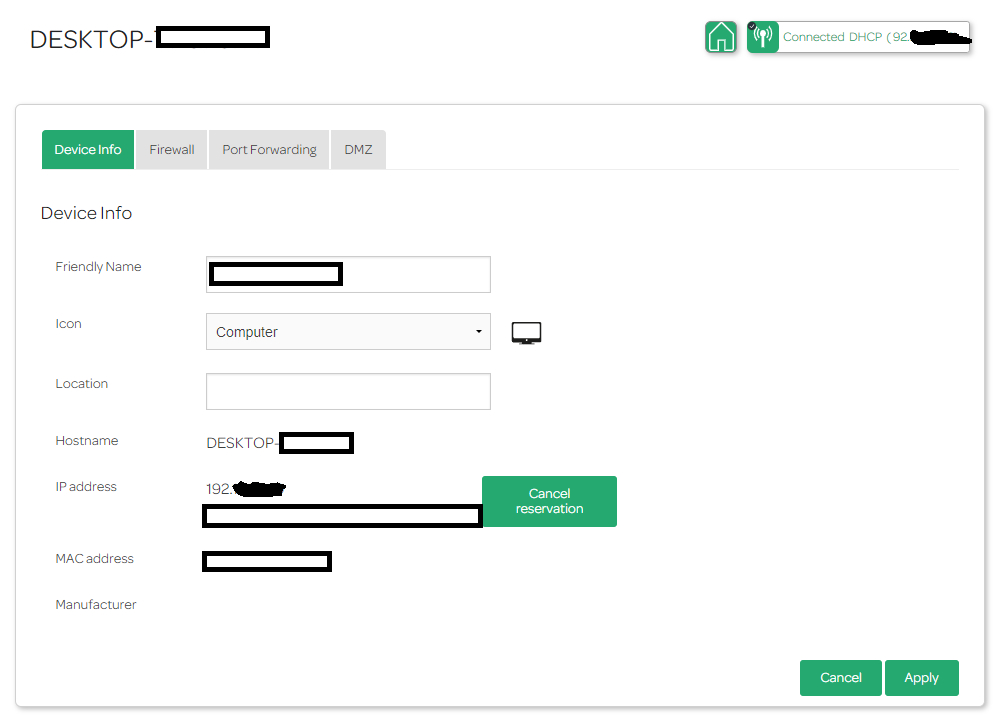 would you be able to send screenshots of your firewall and port forwarding settings for those ports so I can compare? with your IP's redacted of course.

I have already seen this article and done everything it tells me to do. also as I said before I'm not new to this, I know how to port forward. my problem is no matter what I do the port will simply not open.

In the following you can see I've forwarded the port 25565 and given it its own firewall pass way in case firewall level "low" wasn't enough. yet I continue to have these issues. 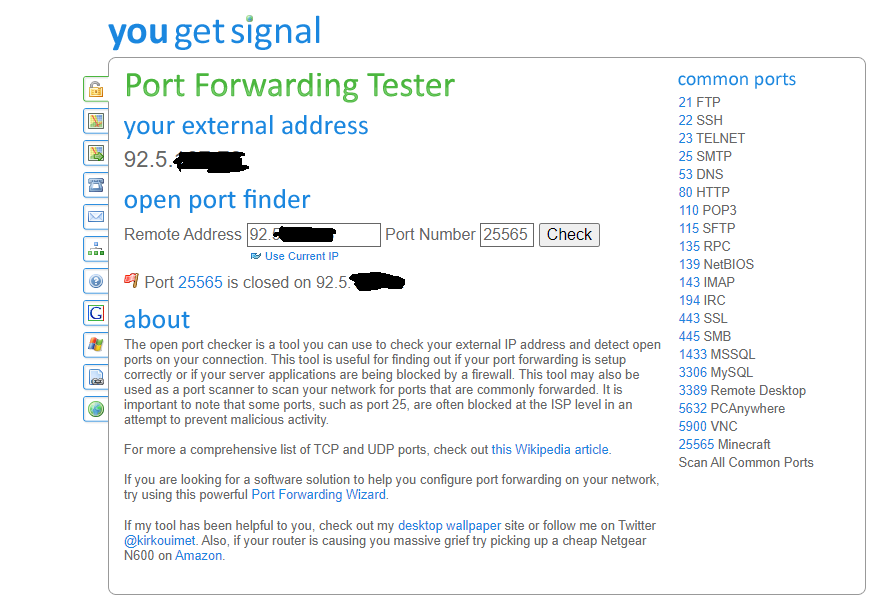 the base talk talk wifi hub.

this one I believe based on how it looks.

what model router are you currently using ?

Depends on your modem/router and how you've set things up I suppose. I can only comment on the DG8041W, but:- 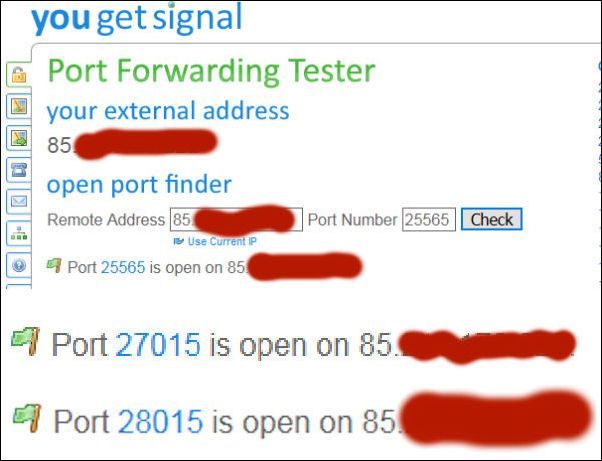 Admittedly these just point to a test IIS webserver, but the same principle stands.

I'm just a customer who might be able to help, not official help & support.
0 Likes
Reply
Options