I upgraded from the standard fibre package to faster fibre last Monday (9 days ago now).

On the old package I was getting about the maximum speeds (37Mb down, 9.5Mb up or thereabouts). Talktalk estimated a potential download speed on the new package of 60+Mb, but guaranteed 47Mb minimum.

I have raised a ticket regarding this and I went through the issue with technical support yesterday over the phone. They said that the line was testing fine and everything should sort itself out in 24 hours. The speeds (and other router stats) have, however, stayed exactly the same.

I have a Sagem Wi-Fi hub running the 2816t software. This has been installed in the same place, with the same wiring etc. for the last 18 months.

Other than a change of less than 200kbps in the sync speed that is the same as when I raised the ticket (before all of the cable changes & a couple of reboots).

Does this mean that, for whatever reason, I will not be able to get the faster speeds on my line - or is there something else that technical support could try from their end?

That's great news Don, thanks for the update 🙂

The engineer (thoroughly nice bloke) has just left. After a fair bit of work on the wiring from the cabinet to the pole outside my house I now have an 80/20 connection! 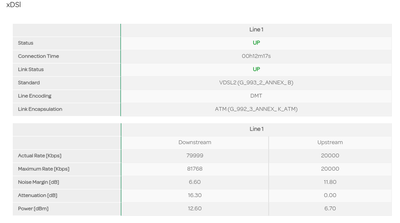 Thanks for your help with this.

Thanks for the PM. I've booked the engineer visit for tomorrow September 04 2020, AM (8am-1pm), please let us know how you get on

OK to the potential charges.

With schools going back I'm afraid that my availability is reduced;

(I think that the upgrade will be 30 days old on the 16th, so I imagine we'll want to try and get it fixed before then)

If you'd like us to arrange the engineer visit can you confirm:

Yes please, this obviously isn't sorting itself out.

Ok thanks. We can arrange an engineer to take a look at this for you. If you'd like us to do this please let us know and we'll confirm some details

No, the phone seems OK.

Are you experiencing any problems with your telephone service, any noise on the line? 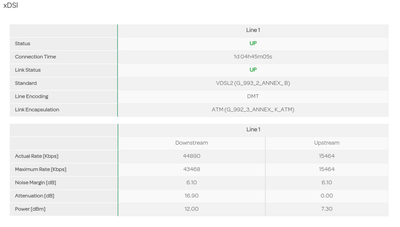 OK, it looks like DLM is back - the connection reset overnight. 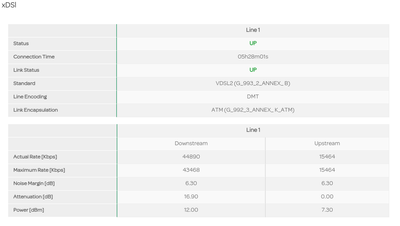 The connection has now gone over 6 days without a reset, no change in the numbers.

It looks like the DLM is finished, is it possible to make it try again? 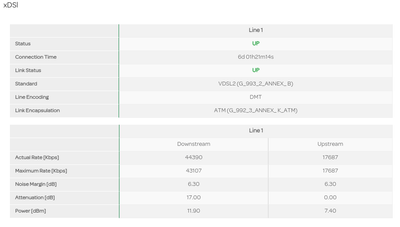 Connection time over 5 days, no change in speeds. No sign of DLM. 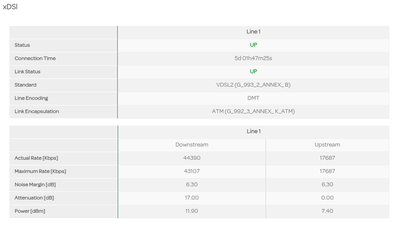 The connection time is now past 4 days, no changes in speeds etc. 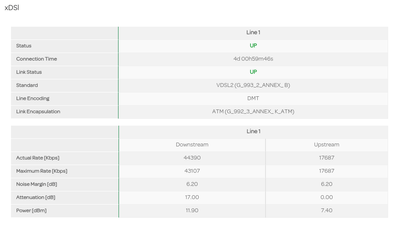 The connection time is now past 3 days with no change at all in the speeds and all of the other numbers remaining stable (see below).

I don't see any signs of DLM operating, is that correct? 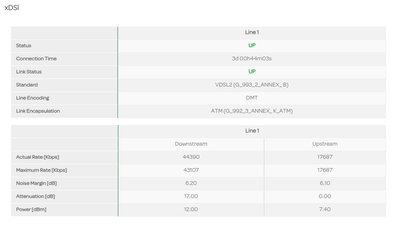 The connection time is now over 2 days and the speeds are exactly the same as yesterday.

Can do. The current speeds are;

Ok thanks for confirming. Would it be possible to monitor the speeds for a few more days now that the router is connected to the test socket to see if DLM makes any further changes to the speed?

Thanks for looking into this Michelle.

Everything is connected up as it was when I finished my call to support on Tuesday, a little under 48 hours ago now.

My router's current connection time is just over 25 hours as I type this, I rebooted it yesterday. All of the numbers have been stable since Tuesday.

So, from what you've said, I'm keeping my fingers crossed to see some improvement tomorrow morning?

I'm sorry for the delay. I've run a test on the line which hasn't detected a fault. Is the router connected to the test socket at the moment as it can take up to 48hrs for DLM to start making changes to the sync speed if the connection remains stable?