I am currently looking into why I have been receiving speeds at almost a 10th of what was advertised to me (picture attached). I have ran speeds tests (picture attached), both TalkTalk and independent, on WiFi (next to and away from the router) and wired with a Cat8 cable.

In almost all of these my DL speeds is approx 20-22 Mbps. The estimated speeds I was provided using my postcode and house number with TalkTalk were about 21-23.3Mb with a guaranteed minimum of 18.9Mb.

I have the Black Super Router. I have logged into my router settings and set the WAN setting to Auto, I believe that is one of the suggest fixes / set up tips. I have also set the WiFi to favor 5Ghz over 2.5Ghz. The router has also been reset using the button on the back it. The router is connected to a BT Open Reach socket, I have tried on the test port with the microfilter box thing provided with the router and with the ADSL adapter that was left when the previous occupier used BT, this had not led to a change in speed.

Is there anything I have missed during set up that would resolve this issue? 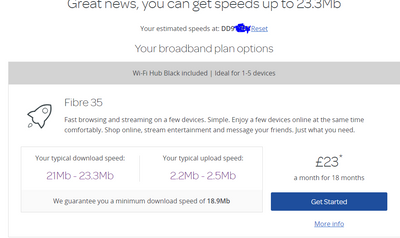 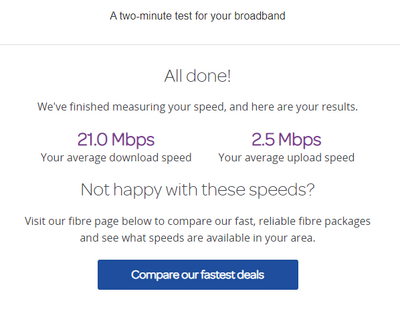 Ah that's not so good news then! Unfortunately virgin media aren't in my area yet. Cheers for the help. Turns out it was my mistake for the confusion!

@ARandomTater with those kind of speeds, no other provider that uses the phone line will be able to give you anything better, you must be a fair distance from the fibre cabinet.

Your FTTC service is as good as it is going to get.

Your only option would be a full fibre service (FTTP) or Virgin Media if either are available in your area.

My understanding is that Mb and Mbps were two different things. If they are not, then I will need to reconsidering my internet package and/or ISP

@ARandomTater  according to your screenshots :

It is performing almost exactly as predicted and well above the minimum guaranteed speed.

I do not understand why you think anything is at one tenth !